I can add that Ilarco certainly offered a Model 180 in this caliber. Below is an extract from the 1990 catalog:

To compound this confusion, here is a document from the person who worked with a gun chambered for this round. It accompanied the .22 Short Magnum (with a Federal F headstamp) sold in a Buttweiler auction some time ago. 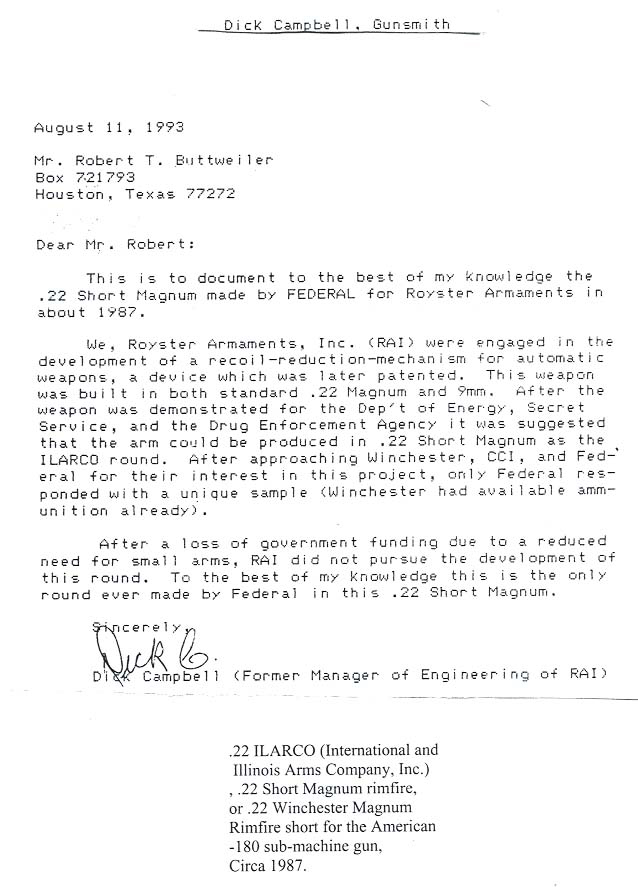 Aaron.
Great info on the Royster round. I saw the round in the auction when it came up, but was not aware of the history. Great digging!

And finally, it seems this thread has made it back to the source of the cartridge collector who first owned this box. He sent the following info as well as info from various .22Box Newsletters from years ago and permission to post it here for everyone:

[quote]Almost 16 years ago in Vol 15 No. 2 of THE .22 BOX newsletter I pictured this box. At that time all of these boxes seem to originate out of Florida. I acquired two of them and [edited] got one of them. The cartridges are identical to the Winchester - Magnum for the American 180 machine gun.

I have letters from a deceased .22 box collector corresponding with American Arms. Inc., dated 1983 and 1984. In these letters the “Winchester-American” is a totally new cartridge. It has the same diameter and same bullet diameter as .22 magnum. These letters talk about the cartridges being boxed a 177 rounds to a box. To my knowledge none of these 177 round boxes exist. In GUN WORLD October 1983 page 72 "through combine efforts of Winchester and Americian Arms – of a brand new round and rifle to accommodate it. It’s called by the rather awkward and long name of .22 Winchester-American Magnum Special (WAMS?).

I am attaching copies of two boxes that I have for the American - Magnum. The first is a plain white .22 magnum box which contains four rounds. One round has a brass washed bullet and is a dummy with a hole in the base. The other three rounds have a FMJ bullet. All found have a Super-X headstamp.

The second box is a two-piece full cover 12 gauge shotgun shell box that is plain brown with hand writing on it. It is full of copper washed hollow point American - Magnum cartridges with SUPER-X headstamp.

Back to the IAA forum, the box pictured is not what I would call a fake box, but an after market box. I believe that someone shortened CCI .22 magnum cartridges and reloaded them the put them in a CCI plastic magnum box with a home made label. The only characteristic of this box that is CCI is the plastic box itself. Everything else points to an after market box. First there is no lot number or product code on the box. CCI puts lot numbers on everything, even experiential. CCI would use a one-piece label, not two labels. The terminology on the label is different that CCI used and the cartridge is not a 22 W.M.R. SHORT. In 1983 I talked with two CCI rimfire production engineers and they told me that CCI had never made any of these cartridges. 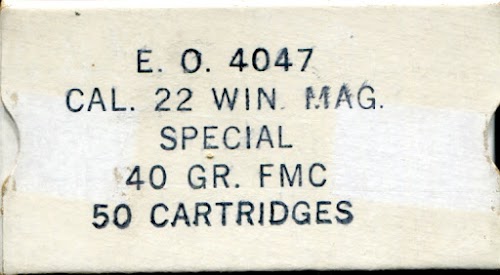 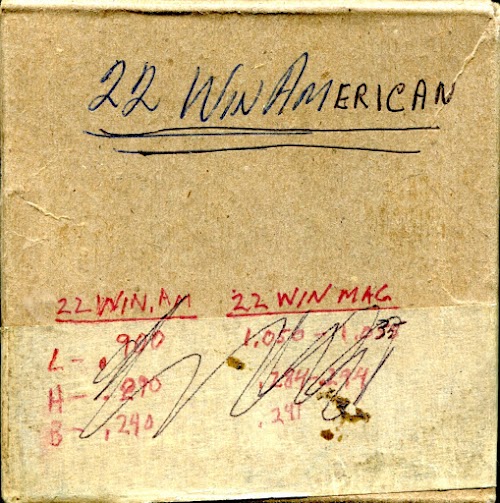 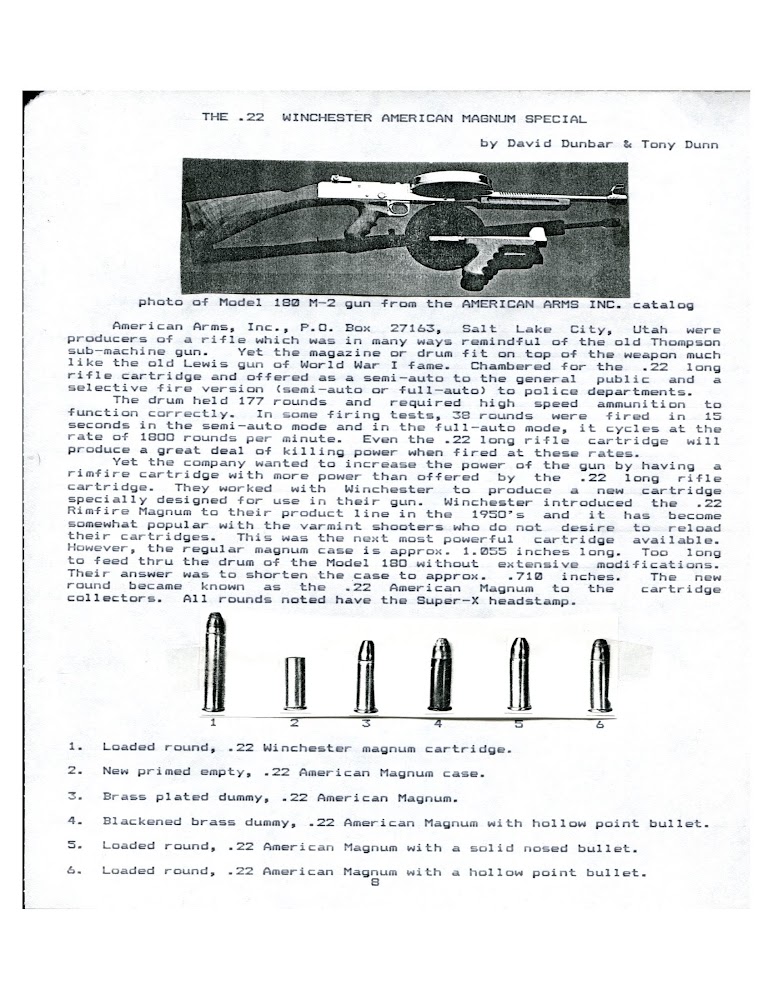 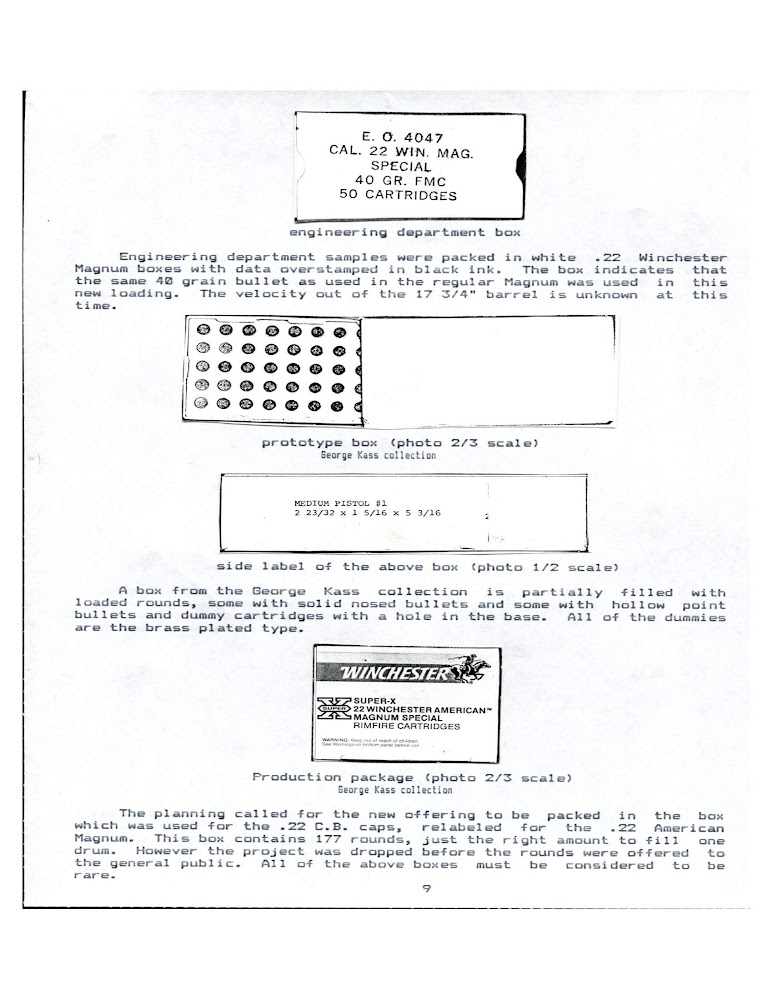 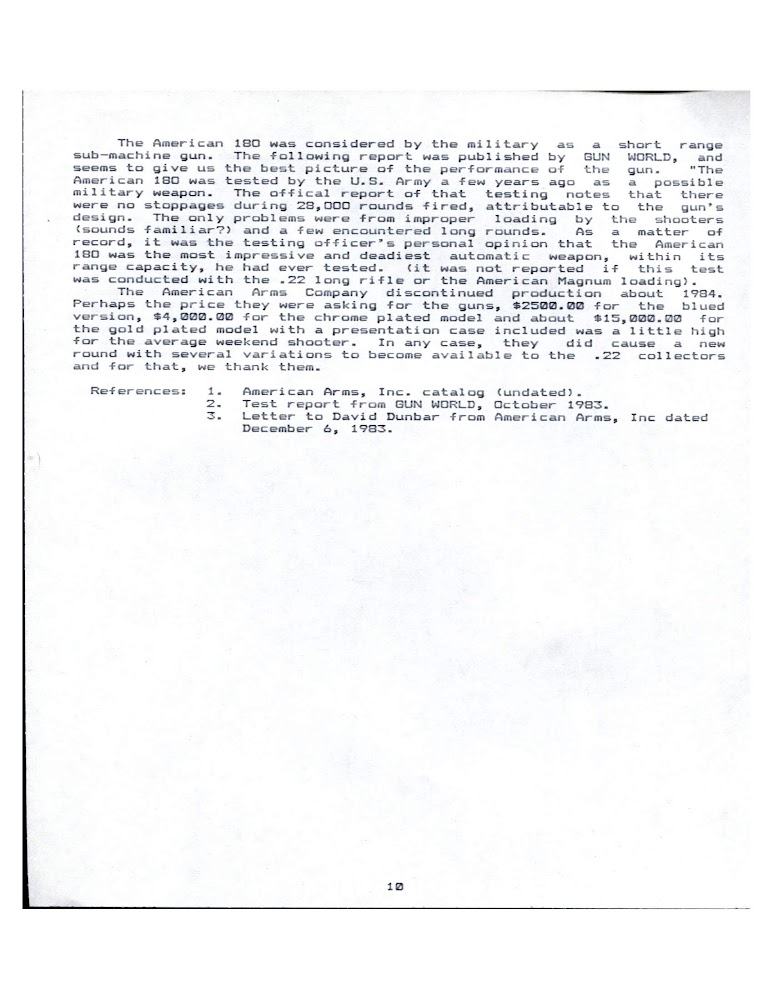 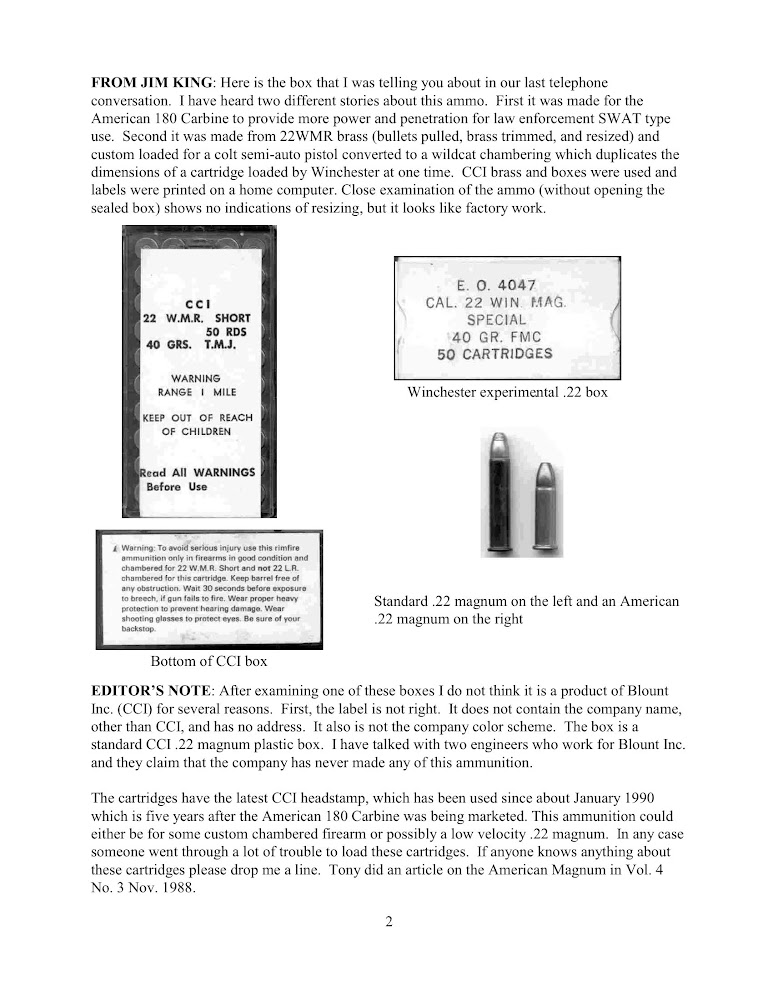 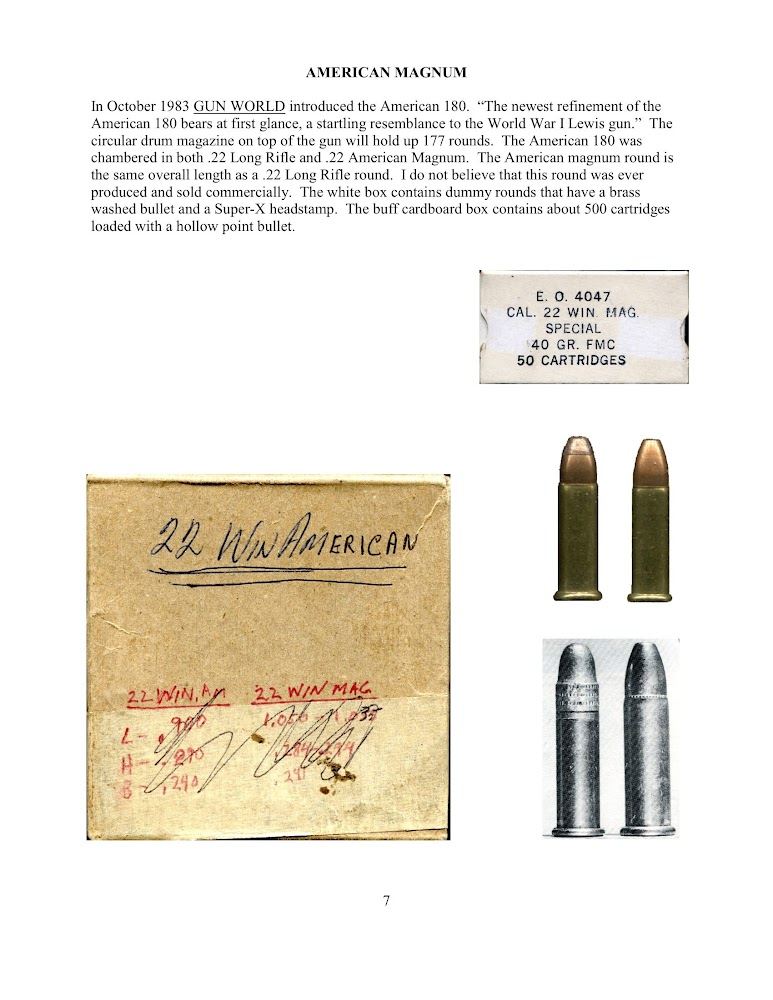 Hi Aaron.
Now I am slightly comfused (normal for me). Is the Ilarco the same round as the 22 Win Mag Special/American Magnum Special/ E.O. 4047? I have examined all of the boxes and rounds in George Kass’s collection and all are identical to all of my rounds (and his and mine came from the same source). I understand the Royster round is different since it was a Federal round and the bullet was slighly different. Is this just an instance where the same round enjoyed several names as the companies went through the various permutations?

Well, I always thought the .22 American and .22 ILARCO were the same thing, but it looks like these others are names for it too. Different people (the various gun manufacturers and the various cartridge manufacturers) all called it something different it seems.