I have a 303 drill cartridge which is made in a similar way like the Belgian 7,65x54 drill cartridges.
The original case is from a normal Mk VII made in Kirkee India.
For and by who was this cartridge made?

For a bigger picture: http://sportschutters.kicks-ass.net/albums/userpics/303%20exercitie.jpg 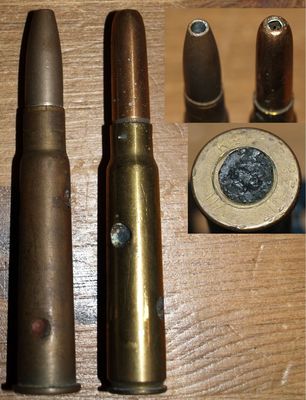 Well it certainly is not a British or Indian Pattern drill round. The filling in the cap chamber is not like any we have used.

Can you tell whether the bullet is a normal Mark VII that has been made into a hollow point? The date on the case (1938?) is far too late for the bullet to be a Mark IV or V.

It certainly looks similar to the Belgian type.

Hello TonyE,
I am almost certain that the tip is cut off and partly drilled out. The “hole” is 12mm deep.

I know its a drill round so nobody is actually going to shoot it but a bullet cut off like that (to that extent) and drilled is going to quite likely shoot the core out leaving the jacket stuck in the rfling. So IMO I would have said its home made, except for the crimp which leaves a doubt in my mind.

People do sporterise military bullets that way, and quite a lot, but it doesn’t strike me as a particularly well informed attempt. Interestingly, the crimp looks factory original so it may be that somebody has modified the bullet at a later date to make it more interesting/ collectable/ sellable as a Dum Dum to the uninformed.
The primer strikes are quite interesting too because one of them is off centre. A common problem with old Lee Enfields that have a loose or worn bolt which tends to float around a bit at the business end because the bolt lockup is at the rear. I wouldn’t expect to see it though on a rifle still in service.