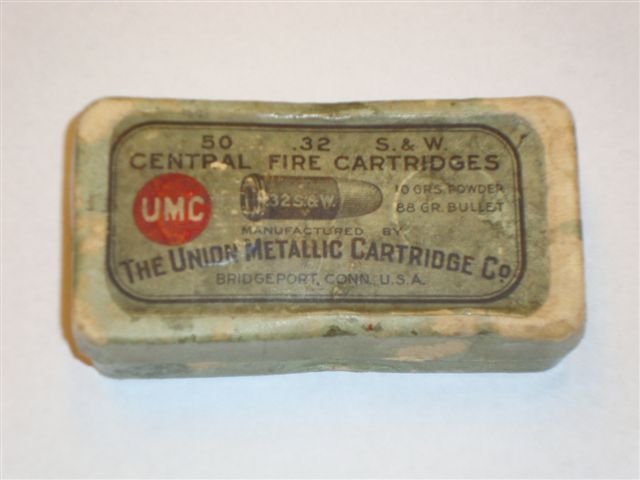 If you posted a picture or two of it we would be able to give you a pretty good idea.

Aaron - I am not sure how to post a photo. Is it ok if I email you one?

Go to the IAA Home Page. On the left side is a link to Remington box dates. See if that helps any. Maybe yes. Maybe no.

Photos can be posted using photobucket, tiny pic, or any other host. There’s a FAQ on the Forum that tells you how.

The box is very similar to the .32 S & W box under the 1911-1915 date except that it has no Remington markings which makes me believe that it may be older. I will try to post a photo. Thanks.

Aaron - I am not sure how to post a photo. Is it ok if I email you one?

You are more than welcome to email it to me too, and I will post it here.

Ok, picture is added back on your original post for you.

Wayne - it is helpful when posting a question about ammunition to give as much information as you can about the cartridge. For example:

What is the primer cup material?
What is the headstamp on the cartridge?
Does the case have a cannelure on it, or is it smooth?
Is the bullet lead or jacketed, and what shape is the bullet?

Some of this information is on the box, but much isn’t. Why is this helpful? Well, in the case of UMC, there may have been an overlap of box use (factories don’t throw a lot away) into the Remington period. Secondly, features change. For example:

UMC began production of the .32 S&W Cartridge in January 1878. However, they did not start loading it with smokeless powder until March 1894, and at that time, the primer pocket was changed to accept a #1 primer. In September of 1899, they added a groove (cannelure) to the case.

Cartridge features help date production, just like box labels do. Since your box doesn’t mention smokeless powder, and the picture seems to show an un-grooved case, production of your cartridges could have been between January 1878 to February 1894, quite a long time span. The box will help close that gap, I am sure. I have not researched those boxes (I don’t collect revolver cartridges at all).

The point is, if a question is asked initially with as much information as possible, it helps everyone else help the person answering the question, which we are all happy to do, more quickly, efficiently, and completely.

John,
Thanks for your response. You have to excuse my ignorance about ammunition as the last time that I fired a weapon was in the USAF basic training decades ago.
The primer cup is copper. The stamp on the cartridge reads “U.M.C. 32 S & W”. The bullet is lead and is not jacketed. The top of the bullet is fairly round almost to the shape of a hemisphere and tapers to the case. I appreciate your help with this.