Here is a 38 special with purple-tip flare projectile. You can see the commercial headstamp and the honeycomb-pattern base of the pulled flare in the second photo. Does anybody know the basic history on these? I have seen these listed for sale previously as being “Navy Seals flare loads” which sounds sort of like auction-hype… but I’m not sure. I picked up a dozen of these from a bin at SLICS for cheap.

To my knowledge, both this variation and the red over green tipped variation were for a Naval contract. However I’ve not seen that contract or a box to substantiate!

Passed to me from Otto Witt

Speculation mostly but I doubt these were used by SEALS. In my limited contact with them, they did not use this caliber. However, pilots did and it is very possible these were intended to be carried by them

JM or one of the other ol hands will surely set us on the right path though.

Well, if I am “JM” I am afraid I am not too up on these .38 flare cartridges. I agree that any use by SEALS is doubtful. They were probably meant to be distress flares for the mostly Navy pilots who carried .38 Special revolvers. Originally, Navy pilots were issued a lot of tracer ammunition in this caliber (normally commercially headstamped and most i have seen by Remington, but there was some thought that if an armed aircraft was cruising along and saw one of these tracers come up in his vicinity, he might just chose to attack the source, rather than think of it as a distress signal. I have heard that twice, one from a full Captain in the Navy Reserve that was a gun collector and a good customer of mine. I don’t know it it truly was any consideration in going to true flars instead of having lethal tracer ammunition do double duty.

I don’t know how widely they really were issued. They made 9mm flare cartridges in various marks and colors as well. I believe the ones loaded in Canadian 9mm cases and R-P cases were for the Navy, but Winchester made some (Olin I should say, before I get slapped down here) with the WCC headstamp in 9mm, in at least red and green flare and I don’t know which service got those.

Wish I could be of more help, but by and large, except when there is a crossover of information into my frield, I don’t know a lot about revolver cartridges.

The Navy “Approach” (the Naval aviation safety magazine) in July 1971 has an article on Pyrotechnic Signals for Pilots for survival use as John mentions. They are listed as follows
38 Special
Mk 130-red
Mk 138-Green
Mk 139 Yellow
Mk 140 green & red

All of these flares were originally produced for Navy Survival.

The original 9mm development was done at the Crane Naval Armanent Depot in Indiana. All the rounds encountered from Crane had yellow and white tips and R-P headstamps. The initial production contract was given to Explosive Devices Inc in Kiln MS who produced the yellow and white tip rounds with the IVI headstamps, but their production of the red and green flares could not pass qualification and the contract for these two variations was given to Dela Enterprises Inc in California. These are the loads with the WCC headstamp.
I don’t know the story on the 38 Special Flares, but from the looks of them I suspect it parallels the 9mms.

I thought this stuff had long passed out of use, then two years ago I was given a copy of the 9mm section of NAVSEA SW010-AD-GTP-010 SMALL ARMS AND SPECIAL WARFARE AMMUNITION, 18 May 2004 published by the Navy and in this they describe the three 9mm loads as Signal cartridges “for nighttime signaling and fired from a 9mm Semoautomatic pistol. They are specially designed for use by Sea-Air-Land (SEAL) teams.” It says others who have a need can order these cartridges but there is no mention of aircrew. The cartridge that came with them was the WCC 73 headstamped green signal load identical to the aircrew survival load in my collection. I only received the 9mm P part of the book and have no idea what it says about 38 Special.

I have never seen a purple tip load, but it appears to be a new load as part of this series so the story about the SEALS may be true. The old 9mm survival loads have sure been passed to the SEALS.

I have box labels in both 9mm and 38 Special (somewhere) of the earlier rounds-not the purple tip.

Then the question would be, what .38 Special firearm do the seals use as normal issue. Surely, they would not supply the revolver as a separate signaling device, when sturdy, all plastic (very light weight) marine flare guns are available on the commercial/Coast Guard Market that fire truly effective flares, rather than these little ones. That would border on idiocy, when their standard pistols are 9mm and .45s. I could see them using 9mm flare rounds, although I have never heard of those rounds in conncection with the seals (I know that means nothing - I haven’t heard of lots of things). They would make some sense.

I have had these flares in .38 in the past with other colors, including, I seem to recall, some with a red and green tip (I mean both colors on one cartridge). Hope my memory is right. I dumped all my dupes of those things when I divested myself of tracers, etc. to meet California Law, since no one would answer my question of small arms cartridge distress signals came under the statutes.

the SEALS have a S&W 357mag in their weapon inventory. For some reason I seem to remember that there has been a practice of arming the team member designated as the medic / radio-operator with a short-barrel .357mag as a secondary weapon.

DK - Interesting. The supply sgt. (Chief) for the Seals units must tear his hair out. They have as many calibers as the Japanese Army of WWII! Well, Special Ops in the Army had the same when I was in - .38s, 45s, 9mm SMGs, 5.56, 7.62 x 39, 7.62 x 51, Lord knows what else. Guess it is easier to supply small units with all that stuff than a major military force. God love 'em - they do a great job for all of us. Good warriors do love their toys. I suppose you could give a Navy Seal a cap & ball revolver and he would still kick butt! Not being sarcastic, either. Glad we have them, and all the Special Ops guys.

With a .357 Revolver in the inventory (can’t quite get the rationale of giving them specifically to medics), maybe they did use some of these .38 flares. I would rather have a good, lightweight distress pistol and a few flares,

John, One reason to have these special signal rounds and not the standard commercial flares is that it is pretty unlikely the badguys will have the same kind of signal capability to confuse you.

Lew - true enough. I was really talking more about the type of flare-projecting equipment rather than just “commercial.” I was using the commercial flare guns made today of very light construction as an example, as opposed to the old-fashion signal pistols made out of solid steel or solid brass. Of course, the military could obtain any type of star-burst, parachute or color of flare they wanted for use in this type of flare gun, as well as options on the guns themselves. I don’t know what kind of flare projectors the normal troops use now. The few flare guns I saw in the Army were still all the WWII types. In my company in Alaska, a Signal Company, we had them packed only in vehicles with other artic gear, generally most of which was taken out of the smaller vehicles during the summer months. I don’t even think every vehicle had a flare gun - I don’t remember one in the 3/4 ton truck I was assigned to. Being a Hq. Personnel Specialist just assigned to that company, of course, there was a lot of equipment I never screwed around with. Of course, during my service, most of our eqipment was still of the WWII type - M1 rifles, M2 Carbines, etc. Same helmet and same web gear, basically, except that our web-gear was a darker green than the true Khaki stuff of WWII. We were still wearing the Brown Eisenhauer-type jackets and uniforms when I first went in, although we got the Green uniforms not too long after. You could still wear, except for formal formations, your old uniforms if you wanted, even on duty, for all of my Regular Army service.

There’s never a guarrantee that the other guys won’t have the same basic types of flares you are using at any given time, however.

Yes John, you are JM.

Though it has been over 20yrs ago, I helped let SEALS out of subs to go do their merry business. When they came on board we I helped them with ammo and such, as the designated ships Small Arms PO. Based on our limited contact and conversations, I still doubt they routinely used .357 or .38 weapons but if they needed one, it would be there.

I know for a fact that .38 Specials of various designs were used by Navy personel, especially pilots, at least up until the 9mm craze.

There was also a small distress flare kit that consisted of a pen-like launcher and small threaded charges that fire a red star shell. These were about the size of a wallet, in a plastic bag, and could be carried easily in a flight suite. Submarines carried them in the 1970’s and 1980’s to go in the life rafts.

I still believe the .38 flare rounds would have been made available to fliers, over combat troops like SEALS.

I agree. My personal belief is that the whole development of these flare cartridges in lethal calibers was for the Navy Air. That doesn’t exclude use by others - some of the Army pilots carried .38s too, maybe their own. I don’t know what kind of handgun, if any, Air Force pilots carried (carry). For a long time though, the Air Police carried .38 S&W Model 15s, so there were .38s in the USAF inventory. Lew would know that far better than I. I was stationed on an AFB in Alaska (Ladd AFB, not Fort J. Wainwright). but never saw an airman with a pistol - of course, it was peacetime, and LADD was not a SAC base. The SAC base near us was Eilson, about 25 or 30 miles down the road from us, as I recall. A mere 51 years or so ago, so I am crazy to trust to my rapidly evaporating memory.

I cannot add much on the origin or use of these. However, here is a photo of a partial box I picked up somewhere. Note the unusual box construction, not a typical commercial style ammo box.
These are the Mark 140 Mod 0 and the printed box probably read (before some idiot ripped off some tape, lifting the printed markings):

Headstamp RA over 69 with red primer seal and green over red tip colors. The bullet and crimping area of the case show heavy abrasion, probably from seating and crimping operations, similar to the first examples in this thread. 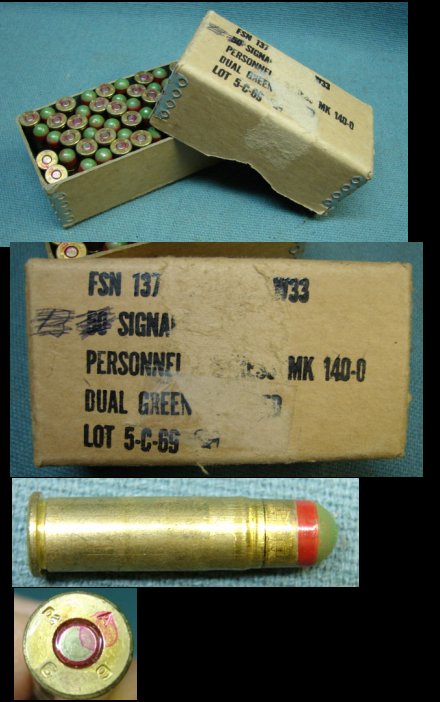