The 5.56x38 FABRL is a cartridge I know relatively little about. Municion.org has a basic size reference, with the rather meager description in Spanish, a language I am not fluent in. I can garner that the cartridge was developed in 1973 by Frankford Arsenal and the Ballistics Research Laboratory, hence the designation.

I was under the impression that the 5.56x38 was loaded with the AR-2 projectile, as described here: 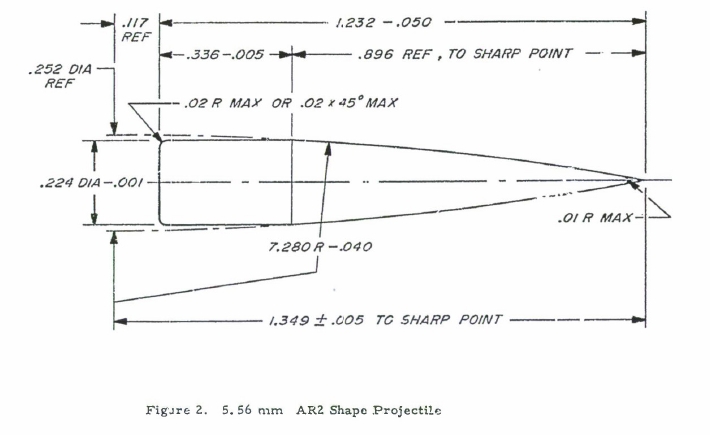 To further complicate matters, I have Aberdeen Proving Grounds ballistic data for a .224" 37gr bullet (consistent with the weight of the 5.56x38), described as “AR-2”, with i7 FF of .836, consistent with a calculated .838 i7 FF at 1,190 m/s (approx. the muzzle velocity of the 5.56x38) for the bullet described in the drawing, yet I have no knowledge of that bullet actually being made!

Does IAA forum know what bullet is loaded in the 5.56x38 FABRL? Does anyone possess pulled or sectioned examples? Does the forum know if the ballistic data I have is for the 5.56x38 or for some other project for which they actually made the “AR-2” bullet in the drawing?

Tau; It’s a coincidence that I happened to be working on chapter 3 of The History of Modern U.S. Military Small Arms Ammunition, Volume III, by Hackley, Woodin, and Scranton when I saw your post. Here’s a quote from chapter 3, edited slightly to remove references to the figures, that should answer your question:

"…To gain preliminary ballistic data on a new series of low-drag (L/D) 5.56mm bullets being jointly developed by Frankford Arsenal and the Ballistic Research Laboratory (FABRL), the standard 5.56mm case was loaded with a series of long L/D bullets during 1972-1974. The first of these was the “AR2 artillery shape” scaled down to 5.56mm with a long pointed ogive and flat base, but this design was difficult to manufacture, so a compromise shape, called the “Von Karman”, with a less radical ogive and blunter nose was designed. A Nosler machined-steel bullet was also fabricated in the AR2 artillery shape and coated with copper or a dark gray finish.

Some later AR2 bullets, machined from aluminum and copper-coated, were loaded in cases headstamped L C 7 4 with purple primer seal and sent to the H.P. White Laboratory for testing in 1975. One of the final designs of the AR2 bullet was fabricated in April, 1976, at Frankford Arsenal using a machined, hollow steel bullet, copper-coated, with steel core and plastic base filler, a boattail base to improve accuracy and a knurled bullet seating cannelure. Bullet length was 1.045 in. and weight was 38.8 grs. However, there is no record of this bullet being loaded for ballistic testing. Because these bullets had a lighter weight and used a reduced propellant charge to reach an optimum velocity of 3250 fps, this development eventually led to a shorter-cased series of 5.56mm FABRL rounds (see Chapter 15, Experimental Calibers)." …

Hope that helps. You’ll love the many rare box labels and fantastic drawings by Gene Scranton that are included with every chapter, and this section of chapter 3 is very well illustrated.

Thank you, Mel. I was going to answer this based on my collection of specimens (not the best proposition) but that no definitive answer could be had until HWS V3.

The sectioned round shows the ‘Von Karman’ type compromise projectile with GM jacket, forward steel core and clear plastic base plug. The case has the F.I.E. which was being designed for use in the aluminum cases to prevent burn through.

Hi John - sorry, I should defined it in the first place.

Paul, great collection! Thanks for sharing.

The term “Von Karman” refers to the “von Kármán ojive” originated by Hugarian Szőllőskislaki Kármán Tódor (American name Theodore von Kármán). It is described as: “essentially a flattened tangent ogive, but it becomes a little wider than the tangent ogive towards the end of the tip”.

Absolutely marvelous info, thank you everyone.

However, I still have some unaswered questions: Does anyone know for sure if the short AR-2 bullet is the one for which I have external ballistic data? The evidence I have is fairly ambiguous.

Does the short AR-2 have a partial Sears-Haack ogive, whereas the long AR-2 has a secant ogive?

Does anyone have a schematic of the short ogive AR-2 bullet?

ED: I have got to get me a a set of those books.

From the black rifle Vol #1