This 7.62x39mm ammunition is showing up on the surplus market here in the US at a number of ammunition dealers. It is being advertised as a Saudi Arabia contract with IGMAN for refurbished or overhauled ammunition.
One dealer, SGAmmo, describes it this way: "Per the importer IGMAN took a large lot of ammo originally made in the 1990s and early 2000s and completely reworked this ammo with new primer and powder and rebuilt it to Mil-Spec for a RSA Saudi military contract in 2014…Projectile is M67 type and non-magnetic. "

The photos below are from dealer websites.

The photo below shows a box containing cartridges WITHOUT a headstamp, note the lot # IK 00 28:

Example of one of the paper labels on the wooden crates: 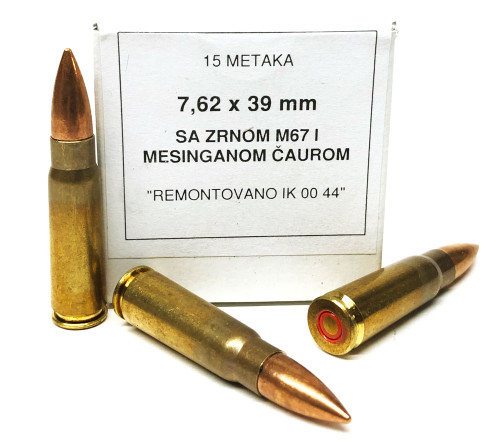 The last dealer website listed above is the only dealer (that I could find) selling individual 15 round boxes at this time. All others are selling by the crate.

Any additional information is most welcomed.

Brian, interesting boxes!
Just that it appears very strange that ammo for Suadi Arabia has all Serbo-Croat (to my understanding of that) language markings.
2014 squares with the times of intended regime changes in Syria and supply of the IS. As we know lots of arms and ammo were obtained where ever possible (lots of surplus but also lots of brand new material) and routed to the middle east. Of course Saudi Arabia was/is one of the main players there and the Serbo-Croat language on the boxes may be part of the intended deception.

Brian & EOD,
Interesting topic. apparently the Saudi special units and Airborne use this ammo and the Saudis have made the gun according to wikipedia.

image1030×113 29.8 KB
But, I have a hard time believing the Saudi’s would buy remanufactured ammo for their forces. Instead, I think EOD is on track. In 2014, the Saudi’s were beginning to support the anti-government Sunni rebels in Syria, a much broader group than just ISIS, (which began with fundamentalists released from jail by Assad to fight the rebels). Since the pro-Saudi rebels have essentially been destroyed, it would not be surprising that this ammo would be on the surplus market. In my experience, which is not great, rebel units are not picky about the markings on their ammo crates.

Others have a lot more insight into this than I do. I would enjoy hearing their thoughts.

Brian, regarding the description made by SGAmmo, this ammuniton was refurbished in 2000, not in 2014, and none of it was made in the early 2000’s but in 1995 (011) or close to that date (no headstamp). The original crates from 1995 were also marked using the Gaj’s Latin alphabet.

The ammunition depot labels indicate this ammunition was in “correct” condition in 2014/15. Also, I really can’t see any explicit connection with Saudi Arabia.

With the ammunition having been refurbished in 2000, in my mind this raises the question why would IGMAN go to all the trouble and expense to refurbish what was probably a very large quantity of ammunition unless they had a contract or buyer for much of the refurbished ammunition?

PS: Can someone please provide translations of the box and crate labels as Google Translator cannot translate many of the words?

A tidbit of inside info.
Stacy Prineas - President for P.W. Arms, Inc. is the importer.
Ok, so I have found out that “Remontovano” in Bosnian (did not know they had a separate language) means “Overhaled”. So I guess one could say “reworked”.

Here is some I bought more than 20 years ago. It was sold as Non corrosive primed. I will try and look for the crate it came out of.

Joe, I think correctly it should be like “refurbished”.

I will have to concur with Lew’s timing and thoughts about Saudi purchase of the ammo for Syrian rebels, and the fact that there is no longer any need for their re-supply. Many of them went the way of ISIS, went on the Turkish teat, or got folded into US-supplied Kurdish forces.

For someone who grew up there, and is native, here is what it says:

Top is the same as picture 1
Front:

Picture 3 is all the same as picture 1, except the last portion is IK-0041

Location of armory for storage: Grabez, Bihac ( this is armory in bosia and hercegovina)
Status confirmed with visual inspection
Functional . Surplus . Fast use, Rebuilt ( Functional is circiled)

I hope this helps you in getting to the bottom of this :)

Now here is my guess:

Bosnia has applied to be part of NATO… They have lots of old ammo, and they need to lower the amount from 38T to 7.6T. The ammo that is way too old is getting destroyed, but stuff that is mid 90s, they are refurbishing it, and selling it as cheap target ammo, they get read of it under the conditions of NATO< and still make some money doing it.

Bosnia is getting a new laboratory to test old ammunition as part of efforts to destroy tons of outdated munitions, mines and explosive devices by the end of 2020.

just my 2c. I think all that Saudia is a little too far fetch for me. If it was made for them, why did it not end up in SA or Siria or the ME all together, why did it lend on the coasts of USA?

Saudi Arabia on Thursday donated Bosnia 2 million US dollars to help it store its surplus arms and munitions more safely.

IF SA wanted the ammo, they would have asked for it to got to SA, not to be stored in Bosnia…

Again, just my 2c, you judge it yourself