It got to be simple, I just don’t know the answer. What is “SPB”?

Were all Sellier & Bellot rounds marked “SBP” made beofre WW2? I have a 7x64 Brenneke with this “SBP” headstamp. Pre WW2?

Falcon - the “S&B” form of Sellier & Bellot’s headstamp has been used the most since WWII, but the use of SBP definitely survived the War. I have post-war auto pistol cartridges, unquestionably of post-war manufacture, with SBP as the headstamp. I think, though, from the style of the box, that the .30 Mauser round in question is pre-WWII. Truthfully, I am not positive of that fact, however, on retrospect. I will continue to believe that, though, unless there is evidence to the contrary.

Aren’t those “Neroxin” sybols used as a date code by their orientation? My round has two of them on the headstamp.

How does Neroxin symbol look?

[quote=“sksvlad”]It got to be simple, I just don’t know the answer. What is “SPB”?

Many of these basic headstamp questions including this one can be answered by looking at the headstamp code guide which is just one click away from the home page of the IAA.

Sorry, my mistake, I looked under “SPB” instead of “SBP”. But I still cannot find Neroxin.

Vlad–Neroxin is a type of priming compound, not a maker. Thus, it would not be found in the headstamp listing.

Falcon mentioned Neroxin symbols so I thought I was missing something.

Vlad and Falcon- the Neroxin symbol appears to most like a “flaming bomb.” However, it actually represents an arrow pointing to a clean rifle bore. It is the symbol for S&B’s non-corrosive “Neroxin” primer. It only appears on Post-WWII Czech ammo, and it is certainly a date code of sorts utilizing the number of symbols, their position, and their orientation (the way they are turned on the headstamp) to denote when the cases were made. The exact meaning (what represents what date or dates) is a factory secret, it seems.

Location: NZ
The “Horseshoe” or “U” shaped primer is most commonly found on ammunition produced by Sellier & Bellot of Czechoslovakia prior to 1936. In 1936 SBP introduced their own anti-corrosive primers called “Neroxin” with the special neroxin symbol.

The 320 Revolver cartridge was very popular in Europe during this time period (as was the 380 and 450). Your cartridge does sound like it could be by S&B.

Sellier & Bellot also used a “V” primer from 1935-cWW2. The “V” is believed to stand for the Vlasim factory.

If the symbols were only used after WW2, then I know my 7x64 Case is post WW2.

The neroxin symbol appeared initially in pairs with the “SBP” hs from 1936 (see images). It appears that previous to this, two stars were used instead

In mid 1983, the “S&B” hs replaced “SBP” and the “neroxin” symbol was continued to be used in pairs. Here are typical Sellier & Bellot sporting hs. 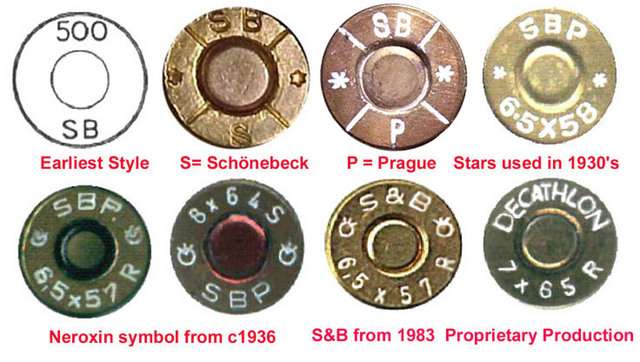 From 1996-97, single neroxin symbols appeared in hs. These are now confirmed as being date codes (John Moss). Sometimes these were placed on the left, sometimes, right and sometimes they were rotated (to three different orientations).