This cartridge doesn’t look like a “normal” Rem-UMC 7.65 mm Parabellum blank. The mouth is obturated by a very thick wad (now pierced) which is heavily crimped. Inside mouth diameter is only 5 mm and case lenght is 20,97 mm. It’s a fired case without primer and headstamp is REM-UMC 30 LUGER.

Does anyone has any information about this round?

Fede - I love it! I suspect this is just another in a long series of blanks, mostly for cinema purposes, made in this caliber by REM-UMC. they differ in primer cup material, color of the paper over-posder wad, with and without neck cannelure. I have 9 variations without neck cannelure and 5 variations with it. Most of these blanks have a mouth opening +/- 6.25 mm. I have never seen one with a mouth opening as small as 5 mm, nor with a case so short as yours.
Most of the cases lengths run about 21.38 clear up to 22 mm. Much more important, I have never seen one with a case cannelure BELOW the shoulder, instead of on the neck, above it!

I was told by a guy who seemed to know the movie props really well, while at a Los Angeles gun show years ago, that many of the Luger Pistols seemingly of German military configuration (Standard 9 mm P-08 4" barrel, no grip safety) seen in movies are actually commercial models of the 1920s (called by collectors “1920 Commercial” and “1923 Commercial,” although I am not sure that they ever had that as a factory designation) with 3-5/8" and 3-3/4" barrels and in 7.65 mm Parabellum caliber. He also mentioned, just in passing, that Lugers were very hard to make work semi-auto with blanks, even with permanent alterations (bore plugs, weakened springs, etc.). I guess that’s why you often see in movies that they are only shot one round, or in many cases, the “Luger” being waved about and pointed suddenly becomes a P-38 when it is being fired. I have seen that a few times. (Also a Japanese Type 14 8 mm suddenly becoming a P-38 when it is being shown firing).

That’s still another 7.65 mm Para I have to look for, following the Beaux-made one shown in a thread a few days ago. I was beginning to think I had that caliber well-covered since I hadn’t added an “old one” for about five or ten years. Goes to show you. For every one we have, there is probably one we don’t!

The so-called "Commercial 1920 and 1923 " designations are thoise developed and promoted by the Luger/Parabellum collector fraternity, and perpetuated in several “serious” Luger Collection Books. (printed in the 1960s)

After WW I, Germany was not permitted to make 9mm Pistols, so many Lugers were refurbished or new made, in 7,65 Parabellum Calibre. ( for Civilian Sales, both in Europe, and for export.).
The 9mm Dutch Luger Contract of 1923, was actually assembled by Vickers on DWM-made Parts, as were several “other” early 1920s Contract 9mm Lugers, by other “non-German” assemblers. ( Vickers had a long standing relationship with DWM going back to the Maxim and Loewe Days ( 1890s).

In the US, the “Commercial” Lugers were retailed by Stoeger’s, which had registered the Trademark “Luger” within the United States ( DWM had always referred to Luger’s design Pistol as the “Parabellum” ( from its Berlin telegraphic address from the 1890s.))

Blank firing a Luger: Due to the Knee-Toggle design of the action,the only way to succesfully get a Pb to funcvtion in SA fire is to change the geometry of the Recoil "hump"at the back of the frame.

Some were “butchered” by welding a bead to change the slope of the Hump, thus making it easier to the Toggel to unlock with even slight recoil…this combined with a weaker spring, allowed the back-pressure and a little recoil to operate the mechanism. This method was often beset by failures to feed properly on the return stroke, due to the weakened spring)

The other (“Non destructive”) manner ( except for the screw-in restrictor vent) is to make a thin metal ring, to fit over the Toggle dishes, to increase the diameter, and thus the Toggle (Knee) is never fully Locked, so that on firing, the back pressure will cause both the Slide to recoil and the Lock to open and eject the shell, and with a normal recoil spring, recharge the action for the next shot.

The heavily roll crimped and wadded shell is due to a Postive lock-in for the laquered card wad, in order that it was firmly in place, and so the Powder could fully combust and give sufficient pressure to cause recoil ( “jet effect” thru restrictor vent).
This has been overcome in Post-1960s Blanks by the star-crimp method of blank closure, which allows for full combustion of the Powder.

Remington seems to have been the major supplier of Movie Blanks from WW I into well after WW II ( I have Stembridge Packets of the 1950s, ( Over-labels on Remington packets) of .45/70 and “8mm Mauser” Blanks.
The .45/70s still function, but the majority of the “8mm” are kaputt.

And of course, the Ubiquitous “5-in-1” by Rem, now supplied as Loadable cases by Starline.

John & DocAV, thanks for your comments.

The cannelure below the shoulder also surprised me but is definitly securing a very thick wad (I tested it with a needle through the primer hole). This was surely done to obtain the desirable pressure, but is still unusual. It may be also the reason why the fired case lost its primer.

I wonder if it could be a 7.65 mm Parabellum carbine blank. Dan Duryea (as Duke Pastrami) used one in “Balls of Fire” (1941), but I haven’t seen the movie so I don’t know if the gun was actually fired. Just a wild guess.

Fede - I’ll have to try to find that movie somehow. “Duke Pastrami”. Wow! Wonder if he came dressed in White Bread or Rye Bread? :-) In this age of political correctness, don’t think they could give him a psuedo-Italian name like that, especially as blonde as Dan Duryea is. (Come to think of it, one of my wife’s cousins in Northern Italy was blond and blue-eyed, and looked very much like a German actor whose name I can’t think of, that always played a German Officer in WWII movies.

I have a couple of blanks in 7 mm Nambu made on .30 Carbine cases I always thought must be movie blanks, but could never find any movie in which they used a 7 mm “Baby Nambu” pistol.

At any rate, a super-interesting movie blank for a 7.65 mm Para!

John, a “Baby Nambu” is fired by Captain Tanida in Letters from Iwo Jima (2006), but yours blanks are obviously much more earlier. 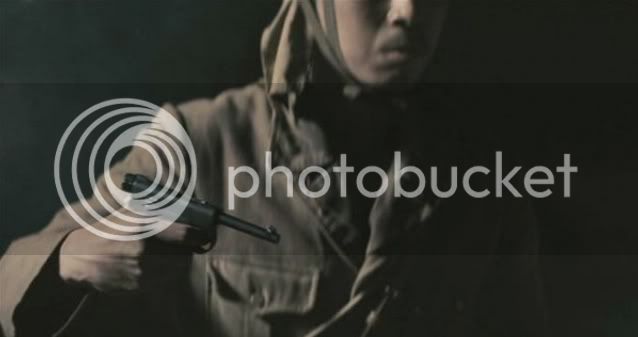