I have recently received a sample of this cartridge that is headstamped " DWM 8 x 51",with a black primer annulus.
Why DWM didn’t headstamp this sample with its numerical code?

Pivi, there is no clear-cut answer to your question but I can tell you what I know:

There exists at least 30 DWM sporting calibres with no date or factory codes at all (see image). Most are likely to have been produced around WW2 - most likely during the early war years c1940-1941.

However, these do exist in both the older serif style (see image top right) and the more modern lettering style which changed in 1926.

According to Erlmeier and Brandt, IWK produced eight sporting calibres in 1952 from existing components and in 1954 also produced Brenneke and Vom Hofe cartridges. These dates are debatable but it is likely that IWK did produce cartridges prior to the post-WW2 DWM date code sequence starting c1959. So what headstamps did such earlier c1952-1958 production use? A distinct possibility is the DWM style with no codes (see right). Several are known with (Copper washed) steel cases, these are likely to WW2 or post-WW2 when brass was scarce. Also, post WW2 catalogs show packets containing cartridges with this

Hi,
this is my sample.Plain brass case 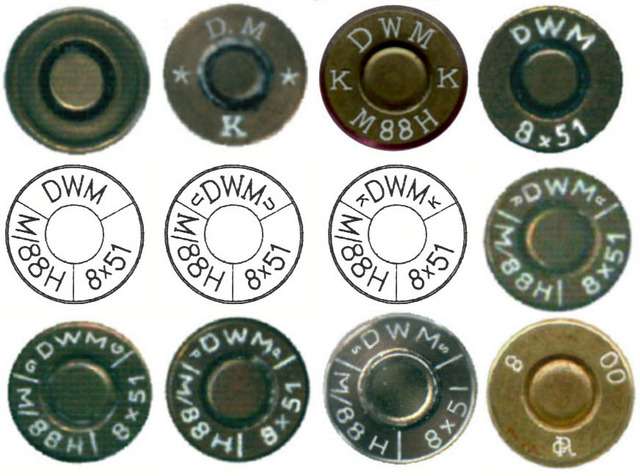 Thanks,
the cannelure on the base of the first specimen looks like the one on the italian 6,5 mm Carcano cases.What was its purpose in the german cases?

Pivi, this is where the hs has been milled off. This example came from a DWM packet and DWM has done this on other case types as well.

It would appear that the only reason this would be done is to hide an existing hs. I suspect that these 8x51 were probably made from surplus 8x57 cases. Sometimes a new hs was stamped over the top - for an example of this, see the 8x57J in the first image of this thread.

Hopefully someone else has some definite info on this subject ??

Did Austria manufacture th 8 x 51 for military use? Isn’t the bottom right headstamp in the photo a G. Roth case with a military headstamp?

Falcon, that G.Roth “GR 8 00” hs is typically not military but is generally regarded as an “Export” hs. It is known on mainly sporting ammunition. There is also a “GR 5 00”. The significance of the ‘5’ or ‘8’ is not known.

It is quite common for Roth to have dates shown on sporting ammunition.

So is “00” a date of 1900? I have never seen a headstamp like that on sporting ammunition.

I don’t know whether the “00” refers to a date or not. Even the knowledgeable Austrian collectors (M

Thanks for the info.