That rifle is now shooting good enough to take it hunting.
My loads use shortened 9,3x72R cases, 193 grain RWS jacketed bullets or H&N swaged lead, powders are Rottweil R901 or SR4759.
These work well, but still I’d be curious about original ballistic data…

But no I see my Dad found a cartridge!
Here it is next to a rimless 9,3x57.
Headstamp H.UTENDOERFFER NÜRNBERG
Bullet diameter 9,29 mm

Is there any more knowledge ?
fuhrmann 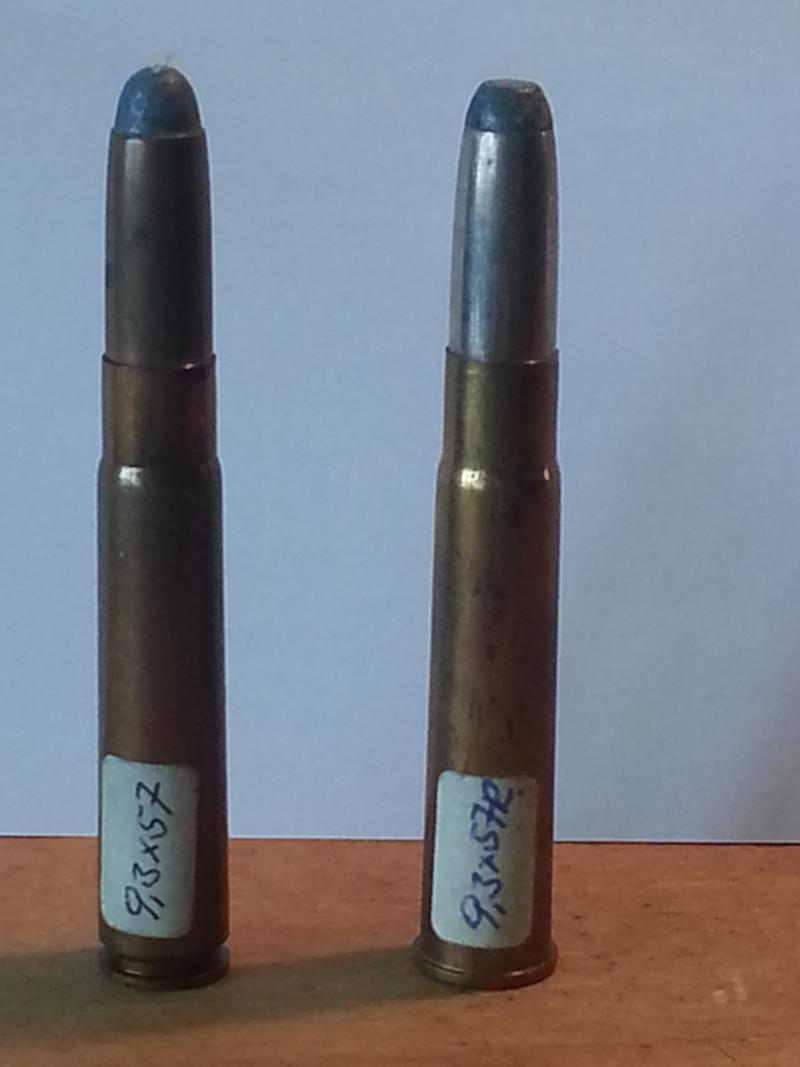 Fuhrmann, the 9.3x57R is a very rare cartridge and the earliest reference seems to be a DWM drawing from 1906 (would be No. 300C), and in the case book this caliber was assigned with number 491C which is titled “Pürschbüchse Kal. 9,3 mm”. It was only listed in the 1908 unpublished supplement for the 1904 catalog.

For what is worth, this caliber was listed for years by Quality Cartridge although I don’t know if any cases were actually produced.

Gentlemen, thanks for your information!
Excuse me, my first posting was not very clear - let me explain:

I know very well that the 9,3x57R-360 and the 9,3x57R Mauser are entirely different cartridges.
Maybe I should not have mentioned both in the same post, to avoid confusion.

On 9,3x57R-360:
I have studied this because I have a rifle that needed ammunition.
There is an article in DWJ 4/1994 by Helmut Eller, explaining the difference between cases 360D (deutsche Form) and 360E (englische Form) and also showing the British .360 Express loads, with copies from Utendoerffer, Eley and Kynoch catalogs.
The 360E form has a case with straight taper, I have some of the mentioned Utendoerffer cases with headstamp N and 360-9,3x57E. These do not chamber completely in my rifle, the case binds “halfway in”". Same with a cartridge B.STAHL 360E
The 360D is slightly concave, so has a wee bit reduced waist. This is only visible when holding a ruler against the case.
I have cartridges with headstamp * H * 360-9,3x57 (Hirtenberg?), these chamber. My rifle obviously is for 360D.
Further there may be small differences in rim diameter. Also bullet diameter must be checked - Germans liked 9,3 mm or .364 to 366, while the British used .357 to .360.

I do not know about case form and dimensions of the British .360 2 1/4 but this was loaded to several levels in power, so I see different cartridges here, from the original .360 Coiled Express with 42 grains BP to the .360 Nitro Express with 30 grains smokeless, 300 grs bullet.

Fede, thanks, this is interesting information.
What is Quality Cartridge?
here is the picture, left 9,3x57, right 9,3x57R: