Gentlemen,
Somebody has a box for a 7.63 mushroom cartridges by Westley Richards? Or drawing of this box?
It is very interesting to me to look at this box

Moutrage - My friend and Forum Partner Joe Jones will be posting a picture of my Westley-Richards 7.63 mm Mauser All-Range box as soon as he has time.

Thanks John! I will look forward.

And what headstamps of mushroom 7.63 you have? I know that 5 headstamps are known and I have two of them. But I have the third cartridge at which repeats a headstamp, but a different method of fastening of a bullet.

I am sorry to be so long in getting this picture off to my friend Joe
for posting. I have been busy assembling furniture for the new deck we
just put on our home, to replace the old one which was rotting away.

The box shown is a Westley Richards Brand box. Not seen in the picture
is the remains of a round sticker on one side, that held down the “tear
string,” showing it to be Westley Richards brand. No other company name
is on the box. The cartridges are on early “square-edged” stripper
clips for the Broomhandle Mauser. The clips are marked
“D.M.” in an oval. The cartridges are by Kynoch, headstamped * K * B
in a classic 4 position headstamp with the “K” at the 12 o’clock
position. Primer cups and cases are of brass. The bullets are
CN-jacketed, covered with a heavy green grease, and have the distinctive
“Westley Richards All Range” Destructive Bullet."

Cartridges and clips are original to the box.

Box from the collection of John Moss; picture by John Moss

Thanks, gentlemen!
I at last have seen as looked the box of my favourite cartridges. I have only three a 7.63 Westley Richards cartridges. But my cartridges differ from each other. 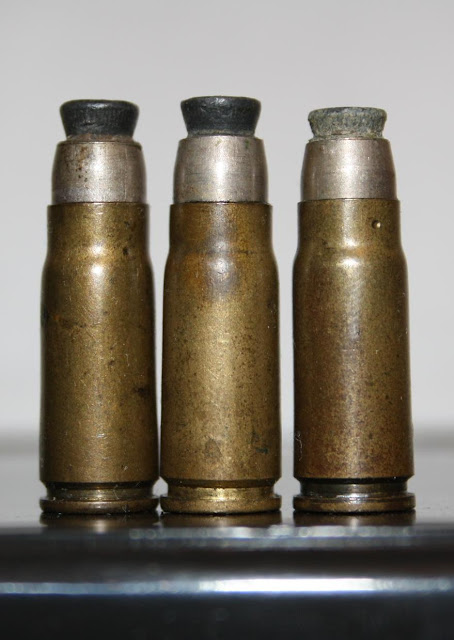 The fourth cartridge is 7,63 cartridge by Kynoch company with usual FMJ a bullet. You can see various fonts, stars and a method of fixing of a bullet. I think that the “mushroom” cartridges very interesting topic to research and always open to suggestions

Was the title of “all-range” meant to imply that this type of bullet was acceptable to fire at very close range as well as other longer ranges? I ask because when firing a relatively high-velocity cartridge like this 7.63, I can imagine that over-penetration would be a concern at close range, and that this bullet might be designed for “all ranges” so as to be safe to shoot at close range since the tip should cause it to expand or tumble upon initial penetration?

I have never found a definitive explanation of why Westley Richards named the particular bullet in question
the “All-Range Destructive bullet.” If one retains the word “destructive,” as the appellation for these rounds
appears on the box label, pure conjecture might be that they are implying that regardless of the range used
at (and I am sure any such meaning would take into account only reasonable ranges for a handgun of this
particular caliber), the bullet performs in the manner for which it was designed. That is, expansion regardless
of the range (and hence, regardless of the velocity).

I doubt that in the times in which these rounds were made, and thier likely use, that “over-penetration” would
have been a consideration. I don’t see why a bullet capped with a soft nose, especially of this design, would
over penetrate (if their really is such a thing as over-penetration). It certainly should not penetrate an animal-
substance target any more than a full-metal-jacketed bullet of this caliber and case type. I think the term over-
penetration, which in my view is very much over-used, is a more modern consideration, due to the necessity of
(primarily) police sometimes having to fire their weapons in relatively-crowded urban environments. That was not
nearly so common in the era of the ammunition under discussion due to less population density, and simply the
social aspects of the times. Let’s face it. To use the USA as an example, the Wild West of yesteryear was not
nearly so wild as the streets of most modern cities of the 20th/21st centuries. Just my own opinion.

I wish there was more information on the “why’s” of some of the designs of pistol bullets developed over the years. While one
can find many references to the Westley Richards all-range bullet, there is little about what prompted its design.
There is an ad, a facsimile of which appeared on the original IAA Forum, that read as follows:

“The fact that the new projectile makes an entrance hole in flesh of 1/2 in. in diameter, retains practically its full
weight within the object struck, and particularly on bones mushrooms completely, should, as far as one can judge,
nearly double the already established efficiency of this arm. “-” Sporting Goods Review,” Sept. 15, 1899."

The Statement is contained in an undated ad by Westley Richards & Co. Ltd., which is probably is contemporary to the
quoted comments by Sporting Goods Review. Please note that where the “entrance hole” is described, that is not
a typographical error on our part. They are discussing the entrance wound, NOT the exit wound.

If to follow logic that assumption DKConfiguration it is viable. But I have very carefully charged one cartridge in mine С96 and have tried to advance slowly a bolt forward. Eventually I have noticed that the cartridge has rested a lead mushroom against a barrel steel. It means that the lead mushroom was deformed at a recharge. This deformation affects the accuracy of the shots at a distant target. Therefore, I limit the range of these bullets close range

Moutrage- I am not sure I follow you? Tests done by a famous Bench Rest Shooter,
asI recall it was Ferris Pindell, showed the slight deformation of bullet tips did not have
a great effect on accuracy, whereas even a very slight deformation of the base of the
bullet had a very bad effect on accuracy. Is it an accuracy concern that causes you
to believe these were “short-range” cartridges?

Of course, in the overall scheme of ammunition, all pistol cartridges are short range, but
I can see no reason at all to assume that the Westley Richards “All-Range” bullet would
be specifically for short range. For one thing, it would seem that velocity is normal for
these rounds, if we take a statement from the Editor of “Field’s” Report, from October
28, 1899:

“We recently made a trial of these bullets, and found that their flight was very accurate
AND THEIR STOPPING POWER MUCH GREATER THAN THE BULLETS FORMERLY USED - the
entrance hole being about five-eighths of an inch in diameter.”

If in truth the stopping power was as great or greater, even with an improved loading that
would indicate to me that the velocity was within the normal range for this caliber and case
type. Note also the comment about accuracy.

I simply see no reason to believe that these rounds were specifically made as "short-range"
cartridges, without the presence of factory documentation to that effect.

Gentlemen,
I found a very strange proposal.
collectorfirearms.org/websit … m-2463.htm
What do you think about this cartridge?

2moutrage - what is it you find “strange” about this offering other than the very
high price? It is an early Geco, Durlach, loading of the Westley-Richards type
bullet, and is a well-known cartridge not much rarer in my experience than those
of British manufacture. DWM also loaded this bullet in cases marked * D.M. * K.

You can tell instantly if it is the Germn version of the bullet or the British version.
British “WR All-range bullets” have CN jackets. German versions have CNCS jackets.
There is no mistaking the two.

On those specimens in my own collection, the DWM bullet has a taller (more lead
apparent) lead tip than that on the Geco loading. Both cartridges have stab-type
bullet crimps at the neck, and brass primer cups with no apparent primer or neck
seals.

Thanks, John. I didn’t see this headstamp with such loading and never read about it. Therefore I assumed that this cartridge is not original

These are the patent drawings covering several designs of this bullet. Sectioned specimens with different headstamps don’t exactly match any of these, although they are closer to Fig. 5, except for the small air chambers (f1).

I wonder if an specimen of the 7,5 mm Bergmann No. 5 and 7.63 mm Mannlicher cartridges was ever found loaded with an All-Range (Teilmantel Pilz) or Capped (Kappengeschoss) bullet by DWM. The patent mentions that “is especially applicable for use with the self loading magazine pistols such as ‘the Mauser’, ‘Bergmann’ and similar weapons” (sic) and the DWM 1904 No. 3 catalog suggest this possibility, although the DWM bullet book only says “zur Mauser Selbstlade-Pistole”. A 7.63 mm Mauser by Kynoch loaded with a WR capped bullet is quite scarce anyway.

Another cartridge with an unusual headstamp

In my opinion, this is simply a poor stamping of the “K B” headstamp. Perhaps even a broken bunter.

It agrees with your assumption. But I think that this headstamp can be read the defective option of a normal headstamp and this cartridge is necessary for adding in a collection if you collect 7.63 cartridges

I can’t argue that point, as it is subjective and we all collect as we wish. I save some
obvious headstamp errors - parts broken off of letters, caliber mis-marked, wrong spelling,
and the like. I do not collect partilal headstamps generally, unless there is suspicion, or
direct knowledge, that they were purposefully manufactured that way for whatever
purpose. Some manufacturers (Spanish ammo comes to mind) has so many instances
of partial or deformed headstamps that it would be a collection by itself.

Not that it matters one bit, but I find no fault in anyone collecting what pleases them. It is,
after all, a hobby and if a hobby doesn’t please the person participating in it, it is of no use.
I have seen, and applaud, some really good collections interesting to anyone that likes
ammunition, that includes dozens of things in it that I would not save in the same collecting
field or specialty, but that did nothing to lessen the pleasure of collecting for their owners,
and were interesting to anyone viewing their collections.

On the “B” headstamp, it was only my intent to point out that in my own opinion, it was a partial
headstamp and NOT specifically made as such. Not having the cartridge to examine, I could be
wrong about that.