I know these ones: 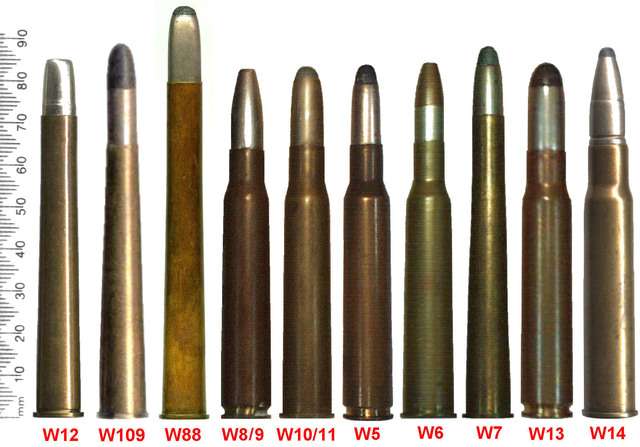 Mister Hannes Kepplinger, an engineer and gunsmith in Kufstein (Tyrol/Austria), developed the 6.5x64 (W67) in 1987. The use of the term “Brenneke” was his proposal and he hoped that this well known name would promote his cartridges. This is the rimless counterpart of the 6.5x64R (W69) and apart from the rim of the second, both have the same dimensions.

The case of the 6,5x64 was originally made by MEN but was later produced by MATRAFEM-HUNGARY (MFS). The cases are loaded by the firm of Hannes Kepplinger using 6,5g (100grs) or 8,4g (130grs) Hornady bullets and modern double-base powders. The ballistic information is impressive, the energy is better than of a 30-06. The hunting success in not only limited to European game. The cartridge fits well for African game too.

Generally thought to have been introduced 1987 (Meyer says 1989) which is believed to correspond with the MEN “V” date code. About 1990, Dynamit Nobel (RWS) responded to these developments by issuing a quite similar cartridge known as the 6,5 x 65 RWS (W57). It may been assumed that Dynamit Nobel

So the 6,5 mm Kepplinger/Brenneke cartridges are a necked down versions of the 7 x 64/65R cartridges,maybe Kepplinger attached the name “Brenneke” according to their parent cases.
I have a 6,5 x 64 case headstamped “MEN 6.5 x 64 BRENNEKE” ( the second one in your picture) but I have never heard something about a rifle in this chambering imported or built in Italy

Correction:there are few rifles imported in Italy and chambered for both the versions of this cartridge ( Krieghoff drillings,Kepplinger and Mauser rifles).
However thiese cartridges are rare and almost unknown here