I just read a magazine article about a New Zealand pilot who flew The British “Tempest” aircraft during WWII. He made mention of engine starter cartridges and the “Cordite” smell they gave off. Were they actually loaded with Cordite? What did these cartridges look like? Were they specific to a particular aircraft or engine? Anyone collect these as a specialty?

As far as I know these cartridges were 12 gauge paper cased shotshells.

Photos of two in an auction;
specialistauctions.com/aucti … id=1417548

The later jet engines like the RR Avon in aircraft like the Hawker Hunter, Sea Hawk, Canberra and many others used a much larger brass cartridge. It was more like a small artillery blank. I do not collect them so cannot post pictures, but I am sure some other of the Brit collectors can oblige.

Funny, they say inert and show other cartridges with the holes drilled…

There were also shortened cal4 brass cases with special mouth pieces inserted. I am not sure who developed these for which engines.

Cordite is not compatible with use in shotgun cartridges because it needs too high a pressure to give complete combustion.
However, the name, as used in the British vernacular can be used to describe any smokeless powder. Its a misuse but very commonly found in books and personal accounts like these.
British shotgun cartridges of this era used powders like Shultz, smokeless diamond or the IMI own brand Nobel powders.

There is no distictive smell unique to cordite, it smells like any other smokeless powder more or less.

Specially made larger starter cartridges could well have used a small charge of cordite, I have no way of knowing. However, its best to assume the term is used to describe the smell of smokeless powder in a geneneric sense.

There was a thread on here before the system crashed which explored this subject at some length. I still hear British shooters describing powder as cordite even though its use has been discontinued for fifty years (well forty eight years) now.

Funny, they say inert and show other cartridges with the holes drilled…

The cartridges shown in the auction are currently LIVE.
If the buyer doesn’t have an appropriate licence the seller drills a 3mm hole in the case to remove the powder. That is why he shows the other cases, so that buyers can see what he will do to the cartridges if they don’t have a licence. Here’s a few others…in the collection

The large brass one in the bottom photo is extremely common in the UK. You very often see them at flea markets being sold as artillry shells, even though they clearly say “CART ELEC ENG START” on the bottom.

The shotshell-like 122 Ga. engine starter cartridges are well known. They were mainly used during WW II in Britain for the COFFMAN engine starter device.
It was mounted on the Spitfire (RR Merlin), Typhoon and Tempest (Napier Sabre) engines.

A derivative wasc the US system Breeze, as a matter of fact a licence built variation.
Several other models do exist, in other calibres, like226,5 mm (2 Ga.)-You can find more details under “COFFMAN ENGINE STARTER” on Google…
Here, you will find an interesting analysis found on an aviation forum:

The Coffman engine starter (also known as a “shotgun starter”) was a starting system used on many radial piston engines in aircraft and armored vehicles of the 1930s and 1940s. Most American military aircraft and tanks which used radial engines were equipped with this system. A derivation of the Coffman starter was also used on a number of jet engines, including those used on the Canberra B-57 light bomber.
[i]The device used a blank gunpowder cartridge that, when fired, would cause the propeller to turn over and hopefully start the engine. The other systems used during the period were electric motors (such as those used in automobiles today) inertia starters (cranked either by hand or an electric motor) and compressed-air starters, which operate much like Coffman starters but are powered by pressurized tanks.

Shotgun starters are composed of a breech and a motor, which are connected by a metal line. The cartridge fits into the breech, and is triggered either electrically or mechanically. The expanding gases from the cartridge pressurize the line and cause the motor to spin and engage the starter ring on the engine, which is attached to the crankshaft.[/i][i]The advantage of the cartridge system over electric starters is that the batteries of the time were weak and trouble-prone. Aircraft with electric motors often required the use of a battery cart and jumper cables, or large, heavy batteries carried in the plane. Inertia starters use a heavy wheel, usually made of brass, which is spun by a hand crank or electric motor, then the spinning wheel is made to engage the starter ring. The Coffman system weighs less.

The primary disadvantages of the shotgun starter are the need to keep a stock of cartridges, one of which is used for each attempt to start, and the short time that the motor is spun by each cartridge. Compressed-air starters, which use the same type of motor, are usually recharged by an engine-driven compressor, negating the need to carry cartridges. Hybrid systems can be made simply by adding a cartridge breech or an air tank to an existing system.

The Coffman starter was the most common brand of cartridge starters during the mid-1930s, and the name was used as a generic description. The starter became famous as a plot device in the movie The Flight of the Phoenix, when pilot James Stewart had a limited number of cartridges with which to start the makeshift aircraft’s engine. (This was also featured in the 2004 remake of the film.)

Some modern military diesel engines still use this device, but advances in battery technology have made shotgun starters obsolete for most uses.
__________________[/i]

I also have a 12 Ga “shotshell”, british regulation from WW I, said to have been used to start the engine on the “Male” and “Female” tanks engines during WW I… It is ELEY made, the whole round is blue-grey cardboard cased, with a printed white disc closure (with load details and date printed in black), the whole piece being heavily coated with a coat of clear, yellowish (aged?)varnish…

Would like to get confirmation, about such an use of engine starter on tanks … Dismantling of one of this rounds shows a big piece of whitish braided gun cotton, with an amount of black powder…I would not like to try it in a shotgun!!!

Yes PLEASE Falcon What are they used for?
I was told for a Submarine Engine. But would sure like to know for sure.

Apparently these were used to start the engines on the English Electric Canberra. I am tol that the nose cone on the engine held the breeches for three of these cartridges. I believe they were also used on other aircraft. They could well have also been used on submarines with diesel engines.

Not really related to cartridges, and don’t have much knowledge of British submarines, but would think that an engine starting cartridge of the type shown in this thread would be much too small to even think about turning over an engine the size of a submarine diesel. Think locomotive engine…LARGE!!..I spent considerable time working on WW2 and 50’s vintage diesel subs…most had Fairbanks-Morse opposed piston 2 cycle diesels…( 2 of them)…and were started using compressed air…Randy

The Deltic diesel engines of UK minehunters were started with a shotgun style cartridge looking like a double length 12-bore, with an electric primer. These engines had opposed pistons, three crankshafts, on a triangular (Delta) configuration. Similar engines were used on the railway locomotives but I don’t know how they were started.

Another brass cartridge that I had in collection, of the same kind employed to start the engines of the English Electric “Camberra” bomber, was used with the Folland “Gnat”, a diminutive light fighter and (or) trainer which saw a small success for export to Finland in the late 50ies-60ies, so a local variation should exist, too.

And who could tell us if the US version of the Camberra, called, if I remember well, Martin B-57 also used another local variation of these big cartridges?

[quote=“VinceGreen”]Falcon, what are they used for?

Apparently these were used to start the engines on the English Electric Canberra. I am tol that the nose cone on the engine held the breeches for three of these cartridges. I believe they were also used on other aircraft. They could well have also been used on submarines with diesel engines.[/quote]

I have this 4-gauge starter cartridge for aircraft radial engines. Huge powder grains and a frontal ignition tube. A regular 12 gauge cartridge is on the right. 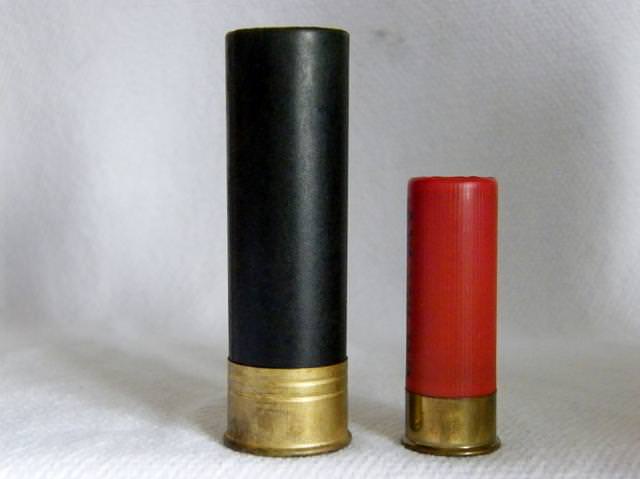 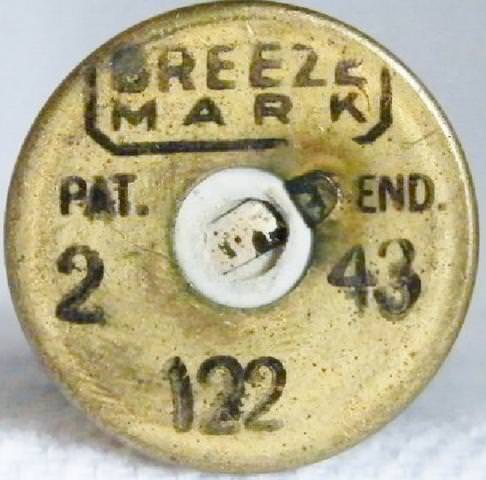