Can you indentify these 9 mm headstamps?

This is a tricky question…

Fede, The cases heads have scratches indicating the original headstamps may have been removed. These headstamps are particularly clear and deep!

I do have a vague memory of a movie where there were fired 9mm cases found and became forensic evidence. The headstamps shown in the movie were totally made-up , These, particularly the BRM headstamp reminds me of the ones in the movie.

Having said this-and it is probably all wrong!!! Where do I get examples of these headstamps??? Regardless of their origin I want them!!! Addiction is a sad thing to see isn’t it.

Lew, your memory is working perfect! These were made-up fired cases displayed in the movie “Extreme Prejudice” from 1987 and described as "“9.3 mm, from West Germany to Montreal, BRM… Distributed by H&R… It’s special, but is not that special”. These will be a great addition to your movie props collection, but I have no idea where to find them.

Fede, You are actually a big help! I saw the movie one night in a hotel room and wrote a note on the BRM headstamp, along with the name of the movie, which I then misplaced. It is strange because I thought about the BRM headstamp last week and wondered what movie it came from. Where in the world did you find these pictures?

Thanks for posting this.

Lew, these are captures I’ve taken from a digital copy of the movie. Do you have plans to include them on your book???

I bet those prop casings are out there in a collection somewhere. And talk about a gun movie! IMFDB identifies at least 28 different guns in that film:
http://www.imfdb.org/wiki/Extreme_Prejudice

Believe it or not the whole movie is posted on Youtube in 7 parts. The part with the headstamps in the sheriff’s office is shown here at the 3:40 mark. I like how the script is somewhat true to cartridge reality when Nick Nolte’s character sees the “43” and says: “It looks Canadian, but there’s no entry for it”:
http://www.youtube.com/watch?v=zPV6hmADlo0&feature=related

There was also an earlier scene in a bar when the sheriff takes one out to show the so-called DEA agent:

Anytime you are looking for an image from a movie it helps to check youtube for movies listed in parts and then pause at the right moment to do a screen capture using the “prtsc” (print screen) button.

There used to be a picture floating around the 'net of a 9mm case stamped “UMBRELLA” from one the Resident Evil movies or video games. Anyone have a photo of this? Matt?

There used to be a picture floating around the 'net of a 9mm case stamped “UMBRELLA” from one the Resident Evil movies or video games. Anyone have a photo of this? Matt?

It did not actually make it to the movie - only the trailer. The first resident evil movie has the slow-mo of her shot bullet, but not the casing. One of my all-time favorite movie franchises! 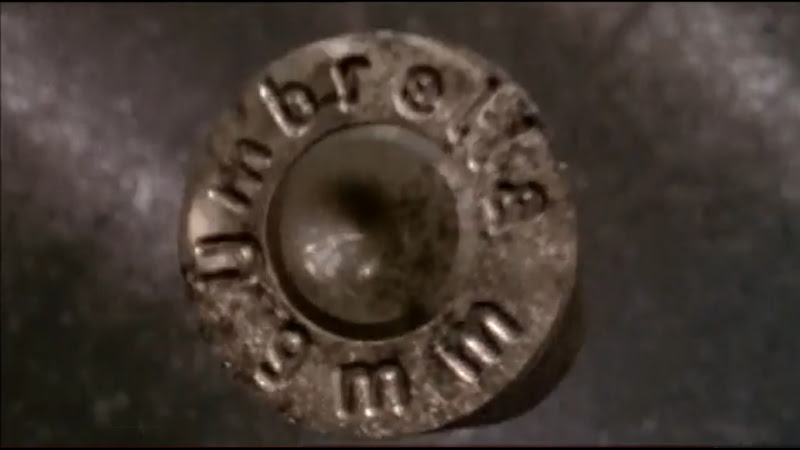 For those who do not know, The UMBRELLA corporation is a fictional bioengineering pharmaceutical company in the Resident Evil universe, that serves as one of main antagonists in the series. It is portrayed in the games as a major international player in a number of markets including pharmaceuticals, medical hardware, defense, and computers along with more clandestine operations utilizing genetic engineering and accused viral weaponry.

A whole new area to worry about. A year or so ago I bought a Leathal Weapon 3 framed set of photos and a cartridge and also a box. The cartridge has a red (probably aluminum bullet in a WIN headstamp. Also a box that says it is a Teflon Jacket Tungsten Penetrator. It was cute and available. Now I have to decide if I chase “Movie Headstamps”. The Umbrella is new to me.

I wonder if that 9mm umbrella casing is a real prop, or just CGI (computer graphics) done for that scene? I did some exhaustive Google searches last night and it turned up nothing for that item, not even a mention in passing, so maybe it’s not out there to collect?

Speaking of movie headstamps, here is one that is definitely a CGI fantasy stamp shown during the trailer for the 2006 movie “The Marine”. It’s a .45 auto stamped as “45mm” - they should really know better:

There’s a similar quick ammo view (7.62x39) scene at the begininning of “Lord of War”. I’ve never gotten a good look at the headstamp. Perhaps one of you Techies could pull a pic of that?

Jon - If you mean the intro sequence, then no, I can’t make out a headstamp, except to say that a few split seconds of film seem to indicate that there is something stamped there, and they are all computer-made cgi models too:
http://www.youtube.com/watch?v=9d0d6qgsvTw

The funny thing is that although the scenes seem to hint at Russian manufacture, all the 7.62x39 cases shown are brass and not steel.

Jon, those 7.62x39 are headstamped 14 and 16 at 6 o’clock (the rest is not visible), but they are computer graphics. Note the crate labeled “ODESSA, UKRAINE”!

In the first of the “Lethal Weapon” series, mid-80s, there was a screen-filling close-up shot of a 9mm round headstamp in a Beretta 92 chamber, when the Mel Gibson detective character was contemplating suicide. I don’t think it was anything unusual, as I remember it was just a normal 9mm R-P. But I’m not sure.

There was also a screen-filling photo of the headstamp " K DWM K 480C " on a CSI Miami show.
I wish I had seen the show, although it was reported to me, because the production company got the cartridge from me! : )

They wanted a 9 mm Para headstamped cartridge with the headstamp " K DWM K 1939." When I informed them there was no such thing, only a 9 mm Steyr cartridge with that headstamp, they chose a standard commercial headstamp rather thana military coded one. I gave they a choice.

The mystery - haven’t a clue where they got my name and phone number. I had to break it down into components (they really only wanted a fired case it turned out) and snap the primer in my P-08 (byf 41) because they needed it it two days, so I had to send it priority mail. You think they would give themselves more time, being professionals in producing TV programs.

They offered me some sort of reproduction of the taping of the show (I don’t know the names for the ones you play back on your on TV, since I refused any monetary reimbursement, but I refused it since I don’t have the equipment to play it. Wish now I had taken it. I could have watched it at my son’s house one day. Been a couple of years now, as I recall. Interesting experience.

Although not depicted in the film, there is also a .45 TSMG blank headstamped K-K 45 ACP used in the recent 2005 remake of “King Kong”.

Falcon5nz also mentions the King Kong headstamp in another earlier thread about cartridges in film here (no pic as of yet):
https://forum.cartridgecollectors.org/t/lethal-weapon-3-cop-killer-bullet-prop/8219/1

In the first of the “Lethal Weapon” series, mid-80s, there was a screen-filling close-up shot of a 9mm round headstamp in a Beretta 92 chamber, when the Mel Gibson detective character was contemplating suicide. I don’t think it was anything unusual, as I remember it was just a normal 9mm R-P. But I’m not sure.