Which is the correct term for this company?

Was it first VFM, and then bought by Capsulerie Liegeoise while keeping the VFM name on boxes?

VFM was registered as munitions factory in 1880:
Mr. Victor Francotte-Wellens registered the limited partnership of “V. Francotte May & Cie” at noon on December 24th, 1880. The new company resided at “quai Orban, 20 - Liège, Belgium” Was this the beginning of the company?

Also, any idea on a timeline of cartridge / cap production (especially pinfire!)

Or was this more like the relationship between Schuyler Hartley & Graham and UMC? 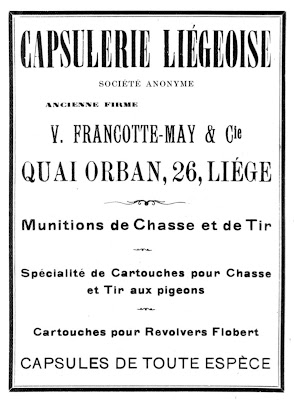 Aaron,
It was common in Belgium to use multiple names for a company and VFM was no exception. These are trade names and not unlike our brand names. The following from my notes…
Initially founded by Louis Falisse in 1843, the name changed to “Société Wasseige, Dewalque et Cie.” in 1863, it used the name “Capsulerie Liégeoise” as a second name, or trade name. In 1867, the factory moved to central Liége. The name changed to “V. Francotte, May et Cie.” in 1871 with the owners listed as Victor Francotte and Henry May. They continued using the name “Capsulerie Liégeoise” as a second or trade name. In 1911, they became “Société Anonyme Capsulerie Liégeoise” qualifying that with “formerly V. Francotte et Cie”. The latter was sometimes written as “S.A. Ancienne Firme V. Francotte May & Cie.”. The company went out of business in 1968. The “V” in “V. Francotte” is sometimes given as “Veuve” which is a term for “widow” - implying that Victor’s widow continued to run the business after his death.