Conversation I had at work today

Today I was asked if I knew the anything about guns as the guy was wondering what “types of bullet” there were for different guns. At first, he thought that “.22, .38 and .45” meant the length of the bullet in mm!. He also said the he originally though there was “one type of bullet for pistols and another one for rifles”.

there was “one type of bullet for pistols and another one for rifles”.

Collecting cartridges would be very simpler …

This reminds me of when I started collecting cartridges when I was around 11 or 12 years old. I had a copy of Cartridges of the World, and I thought that it would be fairly straightforward to get one each of every cartridge ever made! If only I had known then what I was getting into…

I remember explaining that a .22 long rifle round could also be used in a pistol and a revolver.

Or selling .38 specials to a guy who owned a .357 and who was convinced that a 9x19 would fit ‘because they’re the same diameter’. And this guy even had a license… (and had been shooting for at least 12 months, because you have to over here, before you can own a gun).

When I first started collecting cartridges back in 1958 (age 11), I got a catalog from Pete Bigler. I saved my money a sent for my first purchases from a cartridge dealer. I looked through his list and saw all these cartridges marked “PP”. So I ordered about 15 of these. Imagine my surprise when the package arrived COD and the Railway Express Agent (The only way you could ship ammo at that time) wanted $5.00 for shipping. I could not understand why, because I had only ordered cartridges that were marked POST PAID (PP).

Gee, I wish I had an interesting story to tell about collecting cartridges when I was young. But, I don’t. When I was 11 or 12 I was interested in baseball and football. Around 14 or 15 I discovered girls. By 17 I was in the Navy sailing the ocean blue. It was mostly beer and more girls by then. At 21 I got married so it was a wife, kids, and work from then until I was too old to drink beer (indigestion) and chase girls (my wife’s rules, not mine) and so I turned to bullets.

So, you guys should feel sorry for me and send me some of those US Pre-Nato Experimentals that I need to fill out my collection while I can still remember my name. I’ll pay the postage.

I was “discovered” by my fifth-grade teacher to be in possession of a fired rife case. She marched me down to the Principal’s office to have the building evacuated and to have me expelled for endangering the whole school. The principal, who I ran into again a few years later on a deer hunt, just looked at the case, put it in his pocket and told me to pick it up before I got on the bus to go home. My real satisfaction came a couple of decades later when I showed up as a firefighter with an engine co. at a different school but the same principal and teacher to do a safety demonstration.

When I was much younger, my father decided he would buy me my first pistol (my first rifle was a 1903A3 Springfield). At the time, the Beretta 92 was all the rage. I decided, precociously, that I’d select something more proven–A Browning High-Power. My thinking was “well if it’s good enough for the SAS, it’ll be more than enough for me”. My only concern was how to run the pistol quickly, since with a ‘single-action’ handgun I’d have to cock the hammer each time. I quickly learned (by reading the manual) that I had nothing to worry about.

I was also very confused about how a 147gr 9mm HydraShok was subsonic, while the 124gr version was faster. After all, 147 grains of powder would push the bullet faster, right? The guy at the gunshow was tolerant and helpful, explaining that ‘grain’ can mean very different things. Very shortly thereafter I began learning and collecting in earnest.

I still see and hear the above misinformation, and plenty of others, from supposedly learned people. We are all students, and call ourselves ‘experts’ at our own peril.

That’s the thing I love most about this forum…there’s always someone here to prove me wrong and keep me humble!

I still carry a Browning HP, cocked and locked of course, as God and John Browning intended. I see no advantage in any of the “more modern” pistols. Most are bulkier than the Browning, and weight almost as much even though they have plastic or aluminum frames, compare to my all-steel Browning. I have had no malfunctions in the pistol, ever (no qualification needed - not one, even a cartridge malfunction), although Ihave fired thousands of rounds out of it out of many different magazines (all Italian ones - the Belgian magazines made in the last thrity years are the pits, and Browning finally got the word and started supplying Italian mags with the gun.

Now to the ammo part. I prefer the 147 grain for its greater penetration. That is an endless argument and one I won’t get into here. Use the load you think is the cat’s meow and I will use the one I think is. I used to carry a .45 and prefer it, but the 9mm is easier on my old hands, and thus I shoot it better now. Wan’t always the case.

I thought concealed carry was illegal in CA, but I may well be wrong.

I thought concealed carry was illegal in CA, but I may well be wrong.

California is a “may issue” state which essentially means that the local sheriff decides whether to honor your Second Amendment right.

As you can imagine, celebrities, sports stars, and friends of the sheriff get higher priority (though no one will ever admit that).

We all begin in a state of ignorance. Fortunately I became interested in ammo too long ago for me to recall any of my many misunderstandings!

There are a lot of common misconceptions about cartridges. One of them is that it is the entire cartridge which is fired from the gun - there was even a film poster advertising one of the “Naked Gun” series which showed that! I recently did an ammo briefing note aimed at people who know nothing about cartridges, so I was careful to include a photo of bullets as well as cartridges, to make certain…

Even among those interested in ammo there are some oddities. Cartridge cases can be called “shells”, projectiles called “heads”. There is also one self-inflicted confusion: these days we refer to the “base” of a cartridge case but still to the “headstamp” - that should surely be a “base stamp”.

I try to provide a simple explanation in my web article here: quarry.nildram.co.uk/Cartridges.htm

I used to call the bullet the “head”, then I met TonyE and I’ve never made that mistake again… :)

My notoriety for pedantry spreads…

There are a lot of common misconceptions about cartridges. One of them is that it is the entire cartridge which is fired from the gun - there was even a film poster advertising one of the “Naked Gun” series which showed that! I recently did an ammo briefing note aimed at people who know nothing about cartridges, so I was careful to include a photo of bullets as well as cartridges, to make certain…

There is another poster like this for the movie “Smokin’ Aces” which shows an RG 7.62 NATO round with a heart on the primer that has been fired into glass whole. 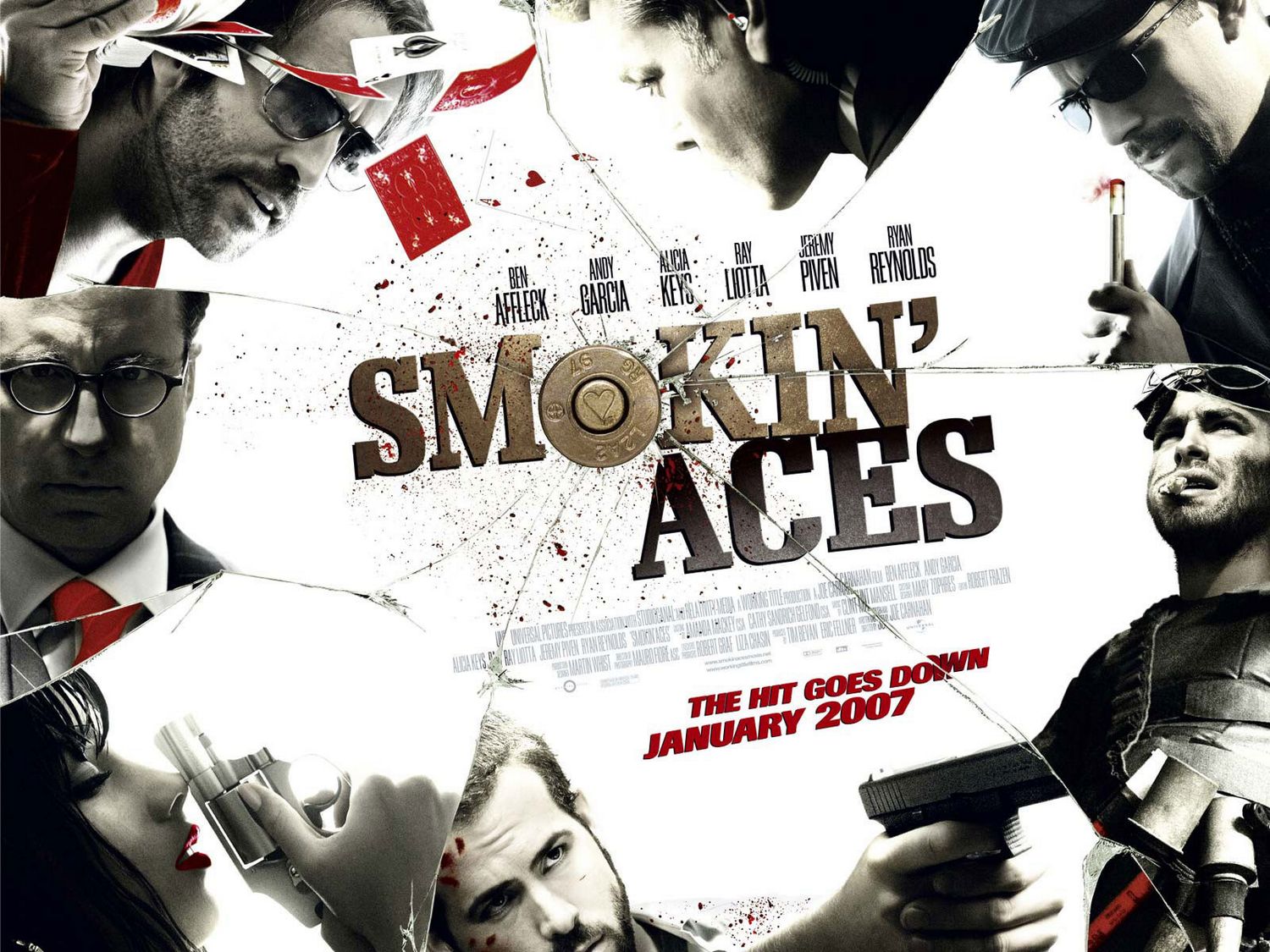 Grew up around and with guns. Always picked up a few hulls and “saved” them. I know where a lot of my “firsts” are. Some are even on display. Had the pleasure of playing the community gunsmith, with a nice, private, shooting range. Scored a number of fine specimens, guns and ammo, from assorted frequenters of the facilities. Now I’m off into larger ordnance and goodies such as that. But just got a substantial variety of SAA from an auction win.
John M.'s preferences mirror mine. The first pistol I actually handed money over for was an HP. Now I’m a SIG guy. 220. After untold numbers before it. But my little Airweight is the preferred “summer” gun. Packed an NAA .22mag on a most recent trip. Whatever fits.
Ray, I wear sunglasses when out and about with the wife. The giveaway is when a nice one is espied and you go DAYUMM! Not good. So try to stay mute.
On a serious note, I’m not all that optimistic about the near future politics of our hobby. I got too much stuff to hide easily.

I found my first cartridge on a Dutch military training ground where my scouts camp was located. There was a 9x19 mm blank lying in the sand before the tent and it was still loaded because the dented primer was still in it and the plastic bullet had some terrifying sharp edges. It must have been a cartridge specially loaded for the special forces.

Later on I discovered that it was already fired and the bullet was nothing more than a piece of plastic that ruptured during firing. However, the cartridge still has a prominent spot in my showcase as being the fundament for my further collection. He’s standing next to the case of the first cartridge (.22 LR) I’ve ever fired.

Falcon, you are correct that it is illegal to carry a concealed weapon in California without a permit, as it is in 49 States in the USA (Vermont doesn’t require a permit to carry a CW, and perhaps there are others, but I am not aware of them). About 35 or 36 states have “must issue” policies. That means that upon showing good cause, and meeting whatever qualifications are required, the LE Agency must issue you a permit. That is not the case in California, where it is at the total discretion of the Chief LE Officer of your Jurisdiction, usually the County Sheriff’s, although a Police Chief may issue a permit. Usually they defer to the Sheriff’s Department, though.

I have had my permit for over 25 years. I went in cold to get it - that is, I had no “juice” of any kind, and I certainly have never been a celebrity of any kind, anywhere. I was met coldly, but after presenting my case, they allowed me to go through the qualification procedure - a written gun safety test and qualifying with each of the guns I wanted on my permit, and since I passed them all perfectly, they issued the permit.

That said, it was then and is now very hard to get a permit in California. Some Sheriffs issue them to their buddies, I’m sure, or to celebrities, but not all. There have been a few big shot athletic stars and movie stars knocked for getting caught carrying without a permit. Also, lots of people who apply haven’t a clue how to present themselves or their case for carrying a weapon to the interviewing officers. They basically kill their own chances to get a permit giving silly reasons or showing up looking like bums, etc.