New to the forum but from what I have been able to see you are the ones that could help me.

Can anyone share good photos of the mentioned ammo? I am trying to know how they should look
and if possible what manufacturers used said alloy for their bullet jackets.

Right now, I can’t supply photos although I have a big collection of .32 auto (about a thousand specimens). Just have other things on my mind and many other things I have to do. However, your basic question would be hard to answer completely. Just about every European ammunition maker who ever made .32 auto ammo used, at one time or another, cupronickel jacketed bullets. The popular jacket materials are generally titled as follows by collectors:

CN Cupronickel
CNCS Cupronickel-clad steel
GM Gilding Metal
GMCS Gilding metal-clad steel
BR Brass
? Tinned
? Tinned steel (not sure if this was use, or how much, quite frankly. Would have to check my collection, and just don’t have time right now.

I would say that CN, CNCS and GM, GMCS were the most popular with European makers before WWII. Brass jackets were know, for sure, and used often by some. In recent years, brass jackets are becoming almost the norm, even including the USA where they were seldom used before the war, if ever (again, I’d have to check on that). Tinned jackets were not, it strikes me, as popular in Europe as they were in the USA, where after WWI especially, and some before, they were very popular until replaced primarily by GM bullet jackets. Again, recently brass is getting popular, and may even represent imported jackets. The ammunition business today is extremely “incestuous.” You can’t hardly tell all the players without a scorecard, in this case, box labels and the like that tell where ammunition is actually made. A label associated with a given country, say “Fiocchi” of Italy, does not in any way guarantee the product is from that country, or that if cartridges were loaded there, that all the components came from the same country.

Very complicated and the list you ask for would include 3/4 of the ammunition makers of the 20th and 21st centuries.

Sorry I can’t, at this time, give you the specific answer you asked for. Perhaps someone else can.

Thank you for bringing me down to earth with my request.
I should then go the other way, i.e. show what I have and hopefully have that identified.

Would it be possible to know the content of copper in the alloys used for jackets?

Again thank you for your clarifying and complete answer.

What do I have here? 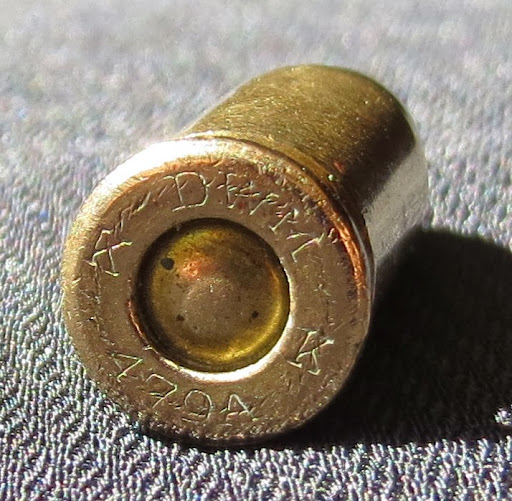 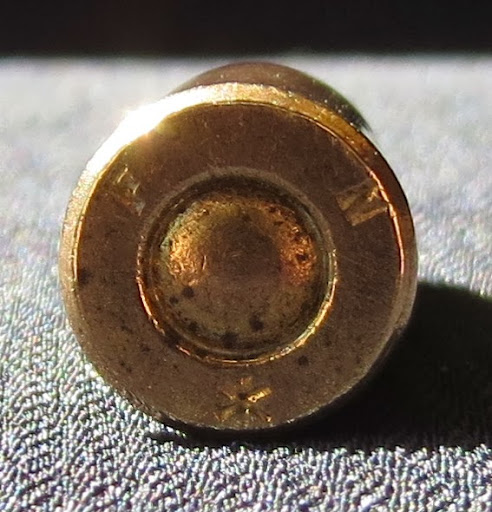 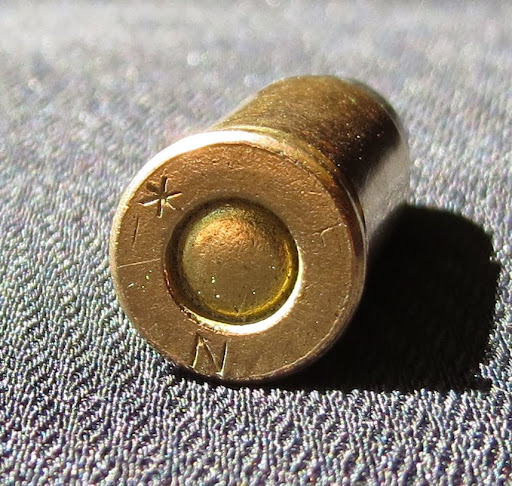 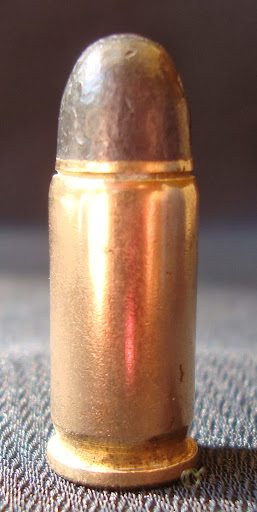 Thanks in advance for your feedback.

JC
P.S.: I just looked at another example of the one with the lead bullet and there is a distinct “F” on the “bottom”, just like the other one posted (* F N).jc

That partial “F” on the FN 32 is not uncommon with earlier FN ammo and that from some other factories. Some of the early headstamping was not very well done. The technology is much better today and now, even from countries famous for sloppy headstamping, it is fairly scarce to see headstamps missing elements (unless purposeful, of course) or with weakly struck letters.

That soft nose bullet with the small bit of brass showing about the case mouth (the bullet is brass from there down, including its base) is very typical of FN (at that time, Fabrique Nationale d’Armes de Guerre, Herstal, Belgium) - in fact, as I recall it is unique to them in the amount of lead apparent and the small amount of jacket showing. It is found in most of their pistol calibers.

The DWM round is and early one as well, as denoted by the older style letters with Serifs. They changed to plain letters, without serifs, in the second half of the 1920s, I believe. Despite its age, it is a common cartridge, as are those from FN (the soft-nose FN round is a bit scarcer than the FMJ). The “K DWM K” just in case you don’t know represents the great Deutsche Waffen- und Munitions Fabriken, A.-G., Karlsruhe, Germany. They also had factories at Lübeck (L) and Berlin-Borsigwalde (B). I don’t recall ever seeing or hearing of a pistol cartridge tied to Lübeck, but the headstamp “B DWM B” from the Berlin-Borsignwalde plant is common on some auto pistol calibers. A sample of the Lübeck headstamp would be “L DWM L J” found on 7.9 x 57 mm Mauser ammo made on contract for other countries, with the “J” simply representing the 7.9 x 57 caliber (I believe it stands for “Jnfanterie”, and the letter “I” is also use in that word, and some ammunition contexts, since in this instance, the “I” and “J” are interchangeable in the German language.

I hope this helps. Pardon if I told you a lot you already knew. It takes us a while to find out whether members on the Forum are beginning collectors - very, very welcome on this venue and in the International Ammunition Association - or more advanced collectors who would like know much or all of what I have said about headstamps here.

Mr. Moss, thank you dearly for your answer. DWM and FN did of course ring a distinct bell but more in relation to weapons than ammo.
(Aren’t the most coveted old Mausers supposed to come from DWM?)

In any case and hoping I am not becoming a nuisance, is there a way to know about the bullet jackets? If cupronickel, can the content of copper be determined?
I have read somewhere that a typical combination is 75% Cu and 25% Ni.

Again thank you in advance.

Here is a photo of the stamping of the other soft point example: 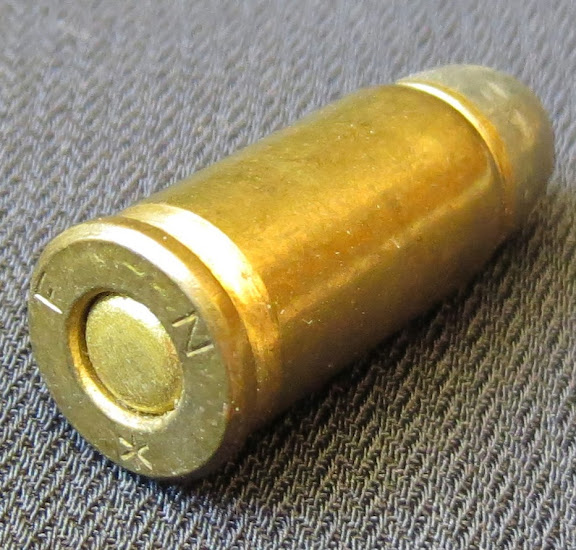 Considering your extensive collection of .32 auto and knowledge, as far as you know did GECO produce cupronickel jacketed bullets after 1985 and if so when were they discontinued?
Can they be bought in the regular market?

JC the classic alloy, if my sources are correct, is 80 % copper and 20 % nickel, used in the French Lebel rifle bullet. The alloy was named Maillechort after metallurgists Maillot and Chorier.

Cupronickel looks like silver, hence the name German Silver or, in Germany, Neusilber (new silver). Gilding has a sort of golden look.
A magnet will tell you whether its really steel under a thin plating or a jacket entirely made of gilding or cupronickel.

Germany is the classic land of steel jackets and if a Geco bullet looks silver, it will most probable be clad steel. Sellier & Bellot during communist time also preferred this type of jacket (for export).

Switzerland was as far as I know was the last European military that dropped cupronickel as a jacket plating material in the mid-nineties, because of fouling problems with the 5.6 mm GP90.

I was looking at the GECO webpage and now all their handgun rounds have jackets that are specified as copper or look like it.

In spite of what you say about Germany and steel jackets, is it possible that GECO used cupronickel at some point?

BTW, using your magnet method, I found that both of the jacketed bullets I posted above (one from Germany and the other from Belgium) are NOT steel.

Geco (A long time part of Dynamit Nobel along with RWS, and now with all three being part of RUAG with home headquarters, I believe, in Switzerland but offices in many countries including Fürth, Germany) most certainly used CN and CNCS bullets in many calibers for many years. I do not know off hand when they stopped, but if I was guessing, I would say the late 1980s. Early on, they also loaded small calibers with brass-jacket bullets, and some use was made of GMCS bullets here and there, certainly in WWII, which have now become the norm for them, although I would suspect we will see Brass jackets again, as that is becoming a norm almost world-wide, it seems.

I am glad our friend Peelen chimed in with that metal formula. I am pretty ignorant on the scientific stuff - the thrust of my studies have always leaned towards the historical aspects of cartridges rather than the technical. He has forgotten more than I will ever know on that kind of subject.

The great thing about this forum is that we have good people ready to help others with almost any aspect of ammunition, be it historical or technical.

At the risk of sounding like a broken record, thank you very much!