Awesome! They remade the .440 Corbon more or less. The article says that Starline is making the brass, and that HSM is loading the ammo. If the box shown is from HSM, then they must be doing a private-label sort of job for Magnum Research with the “Glacier Ridge” name on the box. Glacier Ridge was the brand name for some accessories offered by Magnum Research in the past, but has not been branded on ammo before:

I just heard back from Starline that they are making the custom brass, and that the headstamps is: MRI 429 DE

The .429 is already in production and out on the market. I just purchased a couple of rounds and the box from a friend.

I see that the Kahr Firearms Group webstore has the ammo listed now for direct retail sale. 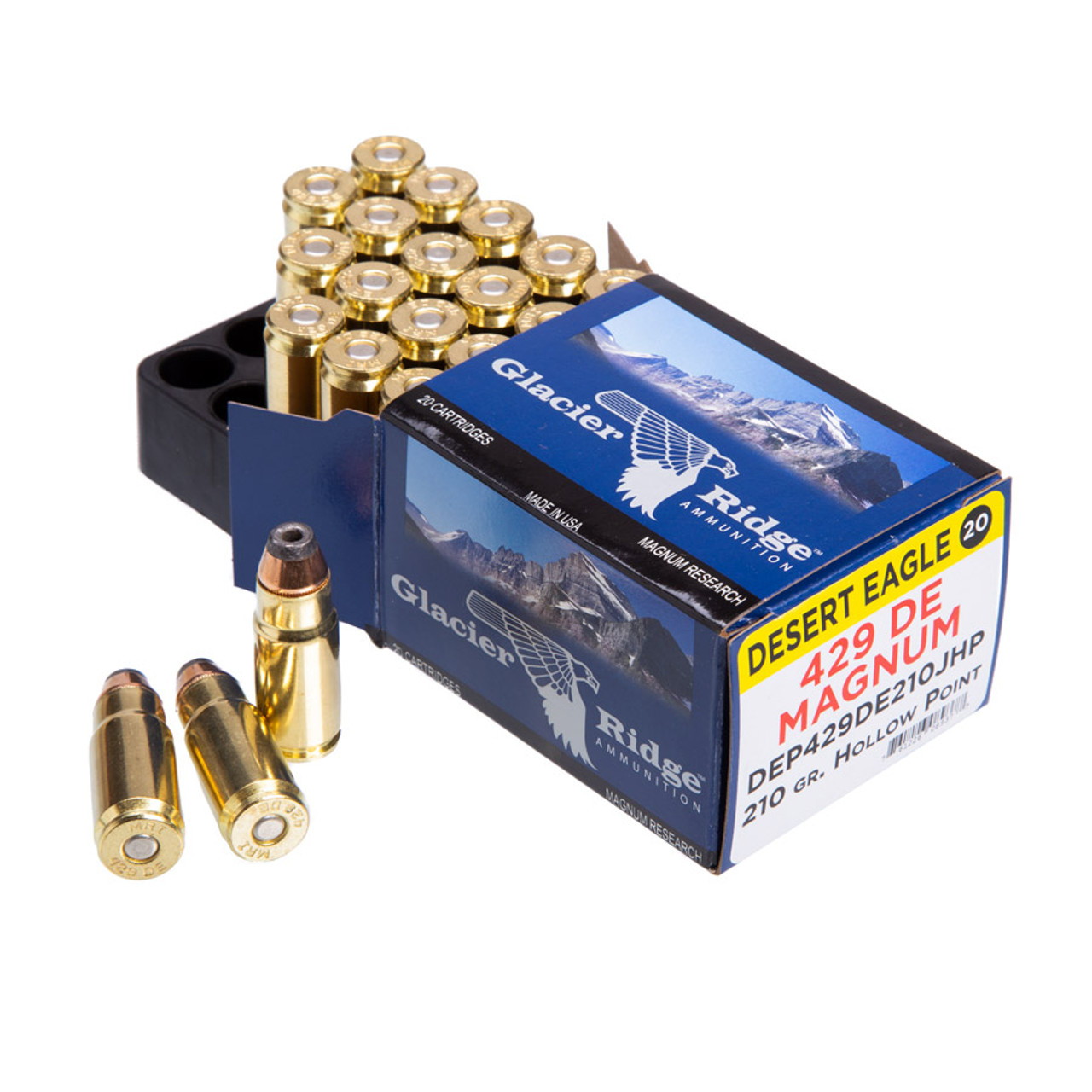 Just noticed recently that a new line of Glacier Ridge ammo called Bone Crusher is coming available in .50 AE and .44mag. They look like unremarkable FMJ loads, but maybe they are a hard-cast / thick-copper or something, like the Barnes Buster bullets?

Once Starline Brass company makes the brass many companies can load it. good deal for the shooter, not for the makers.

It’s already 3rd commercial endeavor to market the necked down 50 AE to 44 if remember correctly…it started in 90’ with .44 Thor, followed by 440 Cor Bon and now 429 DE…except the small differences in the neck position…all are the same.
…honestly speaking…the pistol itself is not constructed to last for long time in cal. 50 nor in 440CB. Friend of mine…really crazy guy who shot almost 50ths rounds from his Mk XIX 50 cal. DE and used to carry that for self defense for 20 years after velvet revolution was facing serious issues with his DE especially with recoil springs and the recoil spring plates. He’s changed this assy many many times, he’s tried to manufacture this part from several materials and either it was tenderize the recoil spring plate or damaging the pistol frame. It’s a weak point of this system. Recoil spring are worn after 200 rounds…he has tried the longer barrel in 440 CB for hunting…but the recoil spring assy lasts untouched for 100-120 rounds…than started to be damaged and the limit was 200 rounds. To all DE funs - this pistol is not for daily operation in this caliber - even if you can afford that.
Another friend of mine had Mk VII in 357 cal. and inspired by my .357 AMP Automag he’s re-chambered one of his 357M barrels to accept “modified .357 AMP” round which has the rim trimmed to .357M dimension. I may find somewhere this unique cartridge - I was helping him with development and loads. He died almost ten years ago…where this pistol end up? I don’t know…but it was interesting upgrade of his old Israel made Mk VII.
Tomas