What are these deep purple or blue bullets? Are they painted lead or plastic? The one on the left has hollow point, the one on the right is solid.

Swaged lead coated with a nylon covering that lubricates and holds the lead together; this means they can be fired at a higher velocity than plain lead SWCs or SWCHPs, and still expand a lot better than a regular JHP. The 38 Spl versions are still favoured by some people who carry 38 snubbies, but Federal has unfortunately cut back or ended production of these rounds, IIRC.

It might be interesting to note that prior to its marketing by Federal, the “Nyclad” line, under that trademark spelling, was a product of the Smith and Wesson ammunition line. In the 1978 Broadsheet that they used to introudce this cartridge, Smith and Wesson claimed, in tests run against three other types of lead bullet, a reduction of Airbourne Lead Particle contamination of from 61% to 89%, as well as claiming that it “virtually eliminates the problem of bore fouling in .38 Special lead loads, including +P velocities.” Initial offerings by smith and Wesson were for .38 Special 148 wadcutter and 158 round nose, .38 Special +P 158 grain SWC and 158 grain SWC HP, and .357 magnum with the same two bullets as the +P .38 Special offerings. They predicted the offering of Nyclad in other calibers, including reolver and auto pistol, which did, indeed, happen. They added 9mm to their line of Nyclad loads. While I have no S&W Literature in my own library showing it, I have a Nyclad .45 Auto round with S&W headstamp in my cartridge collection. Among the other attributes claimed for this ammunition was less smoke, and accuracy and expansion comparible to othe high-performance, lead bullet loads. There was no claim for better wound ballistics characteristics, and probably for self defense, aside from the reduction of airbourne lead, etc., there is no particular advantage to the Nyclad over conventional lead bullets of equal quality, weight, caliber and velocity.

When Smith and Wesson stopped marketing ammunition, Federal acquired the right to market the Nyclad ammunition under the same trademark name.
I didn’t have time at the moment to research when Federal started marketing Nyclad, but the last catalog in which it appeared was that of 2001, so the line was discontinuyed in that year. In that catalog, they offered one 9mm Luger load and four .38 Special Loads. The .357 Magnum is not shown.

Yes, I have also S&W versions.
Here is original Nyclad: 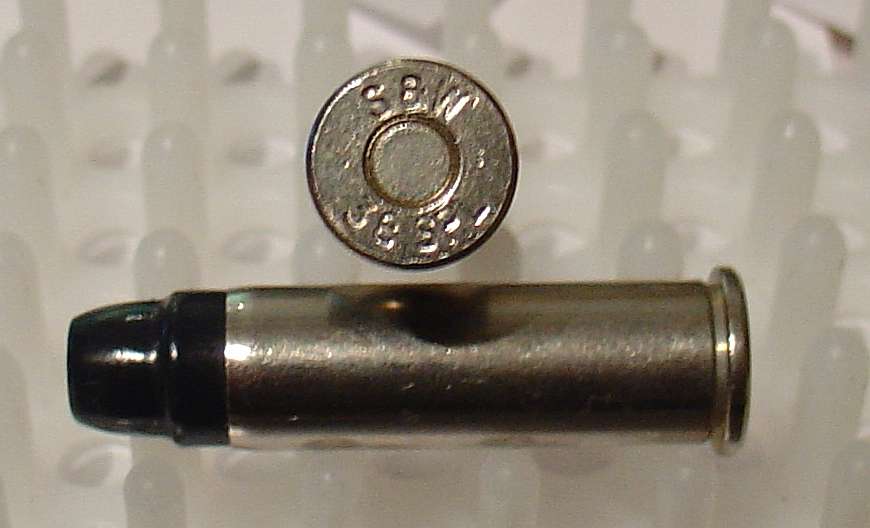 Great picture Hammer. As soon as I figure out my camera, I’m gonna try and top that one. Can’t figure out how to get in-focus close ups. Tried the manual mode, but no luck. May need to get something with a macro lens.