Made originally for the Cal .30 M1903 cartridge, this gauge was used to measure both the body dimensions and the case length. Modified in 1907 for the new M1906 cartridge, the old designation was milled out and the new dates stamped in. No other changes were made.

Anyone know who the Inspector (GHS) was?? If I ever knew who GHS was, I have forgotten…I’m wondering if GWB knows?

Here is a gauge I have had for years…

I only know of two GHS inspectors, and one, Gustavus H. Scott, can be ruled out as he inspected firearms from 1828 to 1873, according to one source. He was a Navy Officer.

Still, it may not be either of them. The 1907 dates on those gauges would seem to rule out Col. Stewart, and Commander Scott seemed to inspect for a very long time, 45 years according to my source which is Steve Fuller’s book MARS TM-157 dated 20 April 1982, “United States Martial and Collectors Arms,” which deals primarily with inspection marks and the like. I do not see a man as an active inspector from 1828 until 1907, which I feel is patently impossible.

I just throw this out as perhaps a beginning for further research into the initials GHS.

Thanks Randy and John.

GHS (Gilbert H. Stewart) is a very common inspector’s cartouche on M1911 pistols. I suppose he could have been an inspector at Frankford Arsenal in earlier years although I have not seen anything to confirm (or dispute) that.

What I find interesting about this particular body gauge is that they left it full length rather than shortening it to the M1906 case length. Also, I have noticed that many of the contract Cal .30 M1906 cartridges that I have will not enter the gauge fully. Was there another spec for contract ammunition??

The ordnance officer Gilbert H. Stewart was born in 1879, and in the census of 1910 he was enumerated in Washington, D.C. He would have been 28 in 1907 and, most likely a lieutenant. If a lieutenant could reasonably have been trusted to inspect gages at Frankford I’d think he is in fact the man. No promises here. Jack

The biographical register indicates that Gilbert Henry Stewart served at FA between June 1906 and January 1908.

That’s great information, guys. Stewart’s posting at FA seems to fit right in after all. My older source simply doesn’t have the complete story on him. Its amazing how long some of those guys stuck around.

I would call this a (not such a) mystery solved.

GILBERT HENRY STEWART GRADUATED FROM THE UNITED STATES MILITRAY ACADEMY AT WEST POINT, N.Y. ON 12 JUNE 1902. I AM VERY CONFIDENT THAT HE WAS WELL QUALIFIED TO INSPECT GAUGES AND ALL OTHER ORDNANCE MATERIAL UPON GRADUATION. BY THE TIME HE INSPECTED RAY’S AND RANDY’S GAUGES HE HAD AN ADDITIONAL 4 YEARS OF HANDS ON EXPERIENCE TO RELY ON. IN ANY EVENT, AS Fede’s POST CONFIRMS LIEUTENANT STEWART WAS THE INDIVIDUAL THAT INSPECTED BOTH RAY’S AND RANDY’S GAUGES. PRIOR TO RETIRING AS A BRIGADIER GENERAL HE WAS THE COMMANDING OFFICER AT SEVERAL OF OUR NATION’S ARSENALS AND ARMORIES. AS HE WAS NOT A COMBAT TYPE OF OFFICER LITTLE INFORMATION HAS BEEN PUBLISHED ABOUT HIM OR HIS ACCOMPLISHMENTS.

I believe that both of the gauges shown were part of the [Model 1905?] Frankford Arsenal bench reloading set.
Or, at least similar gauges were included in the bench reloading set I got a few years ago. (Formerly owned by Townsend Whelen, but I guess if you buy used reloading gear that is not a bad pedigree…)

I am missing the powder measure, so if anyone has one of those, a big bulky cast iron item painted black, with a brass or copper funnel at the top, I sure would like to complete the set. 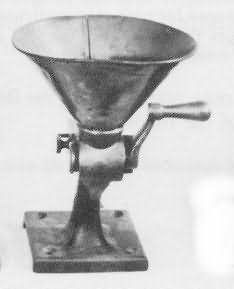