How can I find this patent?

PS : don’t blame me if there is no drawing.
But rather complain to the pearl of the US industry, ie Google.

They are so stupid they still have not understood you must unfold a sheet if it is folded when you want to scan it !

Do you have the link to this in google books?

Do you have the link to this in google books?[/quote]

no I don’t have. I just keep the extracts interesting me.

Ok, so here is the link to this in Google Books where the text can be selected and translated if anyone else cares.
books.google.com/books?id=J6hQAA … &q&f=false

Here is a rough translation of the first patent:

And to Messrs. Gaupillat and Illig in Paris

For a new system of cartridges for Devisme’s revolvers, rifles and pistols of all kinds.

Our invention relates to two specific provisions of a cartridge for Devisme’s gun system for revolvers, rifles and pistols of all types.

2 is a longitudinal section

And Figure 3 is a plan of a first arrangement of our cartridge.

The cartridge consists of a copper shell, provided with a bottom b, which is pierced at the center with a hole c, for the introduction of the capsule, fig. 2.

The ring is crimped e at the bottom and outside of the central hole c, to hold the capsule inside the cartridge.

A zinc disc f rests on the bottom of the cartridge and it is on this disc that comes to compress a washer g of iron or steel anvil.

However, to maintain the washer g, the washer is arched as seen in dotted lines in the cut, in part, fig. 4, so that by introducing the cartridge in this washer, and compressing the there by a punch, then grows its circumferential development by flattening, and it is perfectly well be subject to the inside of the cartridge in the form of a diaphragm pierced by a very narrow central opening.

The chimney h, copper, extends from the washer to the bottom g b of the case and is wearing the capsule, which itself is held by a ring e; it pressed through the b perforated bottom, has a central opening whose edge has a diameter smaller than the capsule.

The powder, under the conical bullet i, down to the bottom of the capsule.

So if the firing pin strikes the center of the capsule, the explosion immediately place i the projectile is launched, but the cartridge is in the thunder or barrel, depending on whether a gun is to a rifle, pistol, etc…

In the first arrangement, the cartridge thus includes six pieces:

The case has its bottom b lacks any opening inside the case on the washer g, which differs from the previous drilling by a double differential in the center (see section and plan, fig. 7 and 8 ).

This disc, originally arched like the first, is forcibly introduced by flattening to form a fixed anvil at the bottom of the cartridge.

The central cavity is lined with dual fulminate do, so that when the tip of the striker hits the bottom of the case has b, immediately there is inflammation and the projectile is launched i.

This cartridge is reduced to two parts, the case has the washer and g.

This is the description of the two cartridge systems, including the compression adjustment of the anvil, with all power of varying shapes, sizes and materials of the various constituent parts.[/quote] 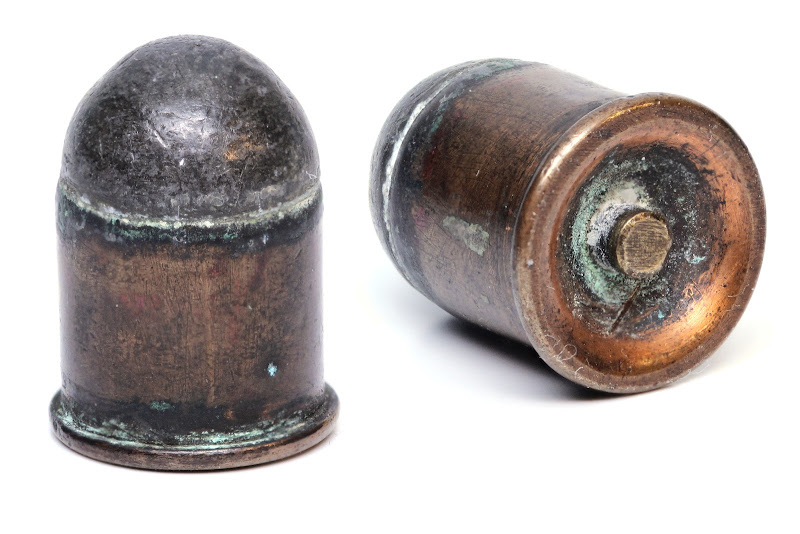 I found a picture of this cartridge in an English translation of a German publication of the cartridge collection at the Smithsonian. They are the same cartridges Berkeley Lewis wrote about, but this particular cartridge is not pictured in any of Lewis’ publications. It is the book that has the large, fold-out colored poster with drawings of many different early cartridges (I can not remember the name of the book!)

In this book this cartridge is pictured as number 16 and labeled as Gaupillat 1858. 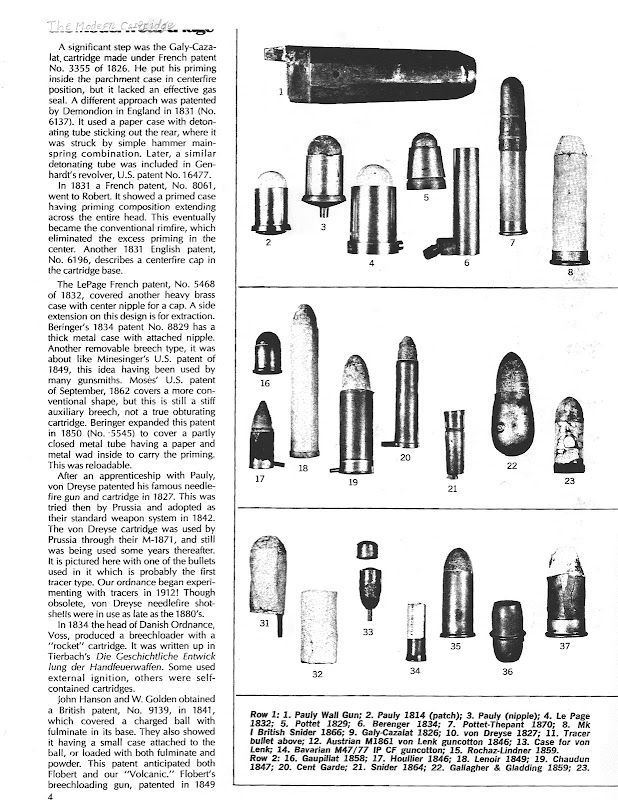 So is it possible this is still a horizontal pinfire, or is this more of a very early traditional centerfire? I have always thought the pin looks kind of weird compared to the others (here) so maybe that is why; because it is not a pin, but rather a cap!

I guess the best way to know for sure is spend the money to get the industrial x-ray I want of these horizontal pinfires.

this patent and the two following riders are not about horizontal pinfire ctges.
They show the first centerfire ctges primers designed by Gaupillat.

Aaron, these are the drawings of that patent:

Hello ,
Sorry for the delay, but it is longer to find something in paper archives than in digital ones

Fede, the ctges you show are not the ones described in the 1859 patent, but a mix (in the wrong order) of 3 different patents (one initial and two additions)

[quote]Fede, the ctges you show are not the ones described in the 1859 patent, but a mix (in the wrong order) of 3 different patents (one initial and two additions)
[/quote]

JP, I don’t understand what you mean, I posted the same drawings as you and no order was intended. The two at right are the ones from the initial patent (December 20, 1858), the second is from the first addition and the first one from the second addition.

By the way, “Additions” are not patents but improvements or upgradings to the main invention and are integrated with the main patent.

[quote=“Fede”]JP, I don’t understand what you mean, I posted the same drawings as you and no order was intended. The two at right are the ones from the initial patent (December 20, 1858), the second is from the first addition and the first one from the second addition.

By the way, “Additions” are not patents but improvements or upgradings to the main invention and are integrated with the main patent.[/quote]

Fede ,
your post was confusing because you said “drawing of this patent” (ref to the one of Dec 1858) and you show all the ctges (including the oes earlier and the ones older) and furthermore you show them from left to right instead of from right to left like we do with chronological order.

The reason I made this correction is the fact I don’t think the people having not the patents in their library have uderstand there were in fact 3 different patents covering one year and it was also to show the ctges in a chronological order.

Regarding the upgradings they are sorted in France like patents, meaning one different number.

Aaron
looking at the brass pin it does not appear to be a primer, it looks solid in that the edges show file marks, caps or primers are drawn. Also you might better be able to see if it does go through the case by carefully removing the green & white junk. a toothbrush and a sharp pick (needle) VERY, VERY gently & very slowly working at it while looking at it under a glass & with good light. Removal ought to get you an idea of the construction at that area. If you want to keep the “patina” just work in a tiny area on just one side.

from the picture it looks as if it does go through the base. If it was a cap it would need a nipple to function.

What’s the writing on the rim that looks like an electro-pencil?

It was just a piece of dust or fuzz. Not a reference number to an item from some famous collection.