From the 2019 Shot Show Global Ordnance Announces "CanMunition" The Beverage Can Full Of Ammo!

For those wishing for more along the lines of Hornady Zombie ammo there is this new item for the apocalypse prepper, CanMunition, 9x19mm in a sealed beverage can: 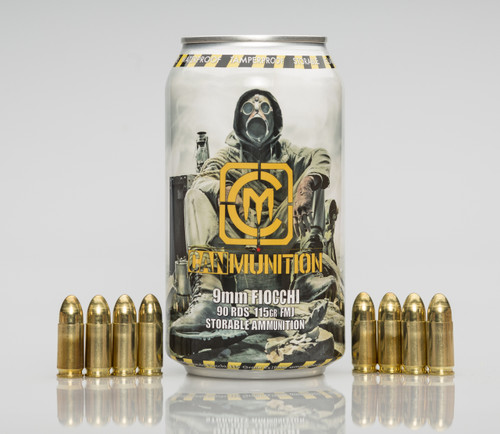 Is there no end to the wacky marketing? :-)

Global Ordnance is a company known for their arms and munitions sales to government and law enforcement entities, but they have a creative new way of selling civilians ammo with their CanMunition that comes in a pop can.

Brian, thanks for sharing!

Interesting note: “This is ammo - in a freaking can”. A very technical remark…

I wonder if the TSA approves this type of can packaging when carried in checked baggage. Federal regulations allows ammunition “securely packed in boxes or other packagings specifically designed to carry small amounts of ammunition”, but I don’t know how are they going to interpret this paragraph.

Interesting point. There is an old expression " Open a whole new CAN of worms!"

I received a 100rd can of Maxxtech (Pobjeda) .40S&W brass case ammo today. I had thought these would have a “pobjeda” headstamp as the .380acp and 9mm have had, but these turned out to be MAXXTech stamped. With the high rate of case metal & headstamp variety experienced over the past year with Pobjeda, I wouldn’t be surprised at all if we see 9mm with a Maxxtech headstamp sometime soon. [image] I see that there is also a 50rd boxed packaging version for this same load (same headstamp), and t…

Upon second thought, hopefully not.

The can’s graphics suggest that 9x19 fmj ball is a good thing for the apocalypse. Better than nothing, but Fiocchi fmj 9mm? Meh… If they had done SST 2-part cases, or gave it a goofy purple tip maybe I’d bite.

Many years ago, SK of Schönebeck already offered .22 long rifle in cans.

Jochem, thanks for mentioning this. I just checked my SK folder and noted that in 1995 they also offered 9 mm Para. in cans:

Not commercial but Finland did in 1987 already.
To what I understood these are ballistic standard/reference.
Packing was not just “thrown in” but stacked inside propperly but still a can.

Source internet (maybe even from the forum here).

the can is similar to “boite 5/1” in french
for image of “boite 5/1” ,just type on google and you had the picture

Rufus - do you know where that picture comes from - that of the Grom ammunition? From the method of display of the handguns in the back, and the variety there, it doesn’t seem like it would be a European Gun Shop.

This is a totally new headstamp on me, and probably others on this forum. I had not seen a “GROM” headstamp on 9 mm before.

Unless my eyes are deceiving me, the Grom 9 mm in the cans shown on the thread, clearly a photo and not an artist’s conception, are headstamped “Grom.” They may be like a lot of the smaller companies in the USA, starting out as reloaders only, then progressing to offering “new” loads, but in any cases they could acquire, to finally having their own headstamp.

If I am reading that headstamp, which I enlarged, incorrectly, let me know. It would not be the first time :-).

The Canmunition is now available at Global Ordnance. I see they have updated the can graphics to denote Fiocchi more prominently on the label. This makes those original more generically labelled cans from SHOT Show a collectible I suppose. The price of $24.95 per 90rds is nothing special and you are basically paying for the sealed nature of the can, though modern aluminum cans are relatively flimsy.

Of course, as seen above, this stuff isn’t even in the running for the claim of being the first “canned ammunition.”

The Dutch navy had sealed ammo cans in the 1920s already. Both round and rectangular air tight sealed tins. ;)

Absolutely right. I am missing the 7.65 mm Tin(s), but I have two variations of the RWS Tins for 9 x 19 mm Para for 48 rounds each, and one for 24 rounds. Ammunition by Rheinisch Westfälische Sprengstoff but with truncated bullets and Dutch-language labels for the Netherlands.

Finland also packed ammunition in sealed tins, more like an elongated “Spam” can, with typical “key” for opening the can attached to one end. I have one for 7.65 mm Para ammunition, but know they also made them for other calibers, at least 7.65 mm Browning, as I recall.

The advertising for the new stuff is simply wrong, with many earlier examples in both commercial and military tins.