This is a test of using Google online storage for my photos, but thought I’d try something that may interest some of you.

I only know of three fluted 9x19mm dummies made in Germany before the end of WWII. These are pictured below. 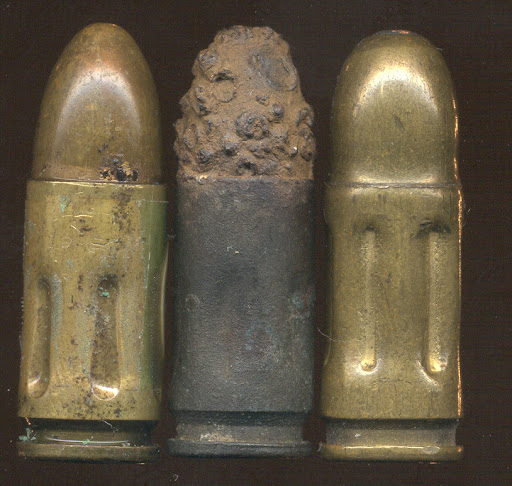 The round headstamped “DWM K” is illustrated in the DWM Case book as 480C3. I know of 6 of these dummies. The Spandau headstamped fluted dummy was one of three dug up together in Germany within the last 10 years. The 487C dummy is the only one I know of and was in a very good 9x19mm collection from at least the mid-1960s when I first learned of it until a few years ago.

Interesting info, but no luck with the photos.

Your photos show up just fine on my end. As Jon said, great information and thank you for posting those very rare items.

Ah, my school software was blocking the host site. I right-clicked on the image and told the blocking software that the site was trusted. Now I get the pics.

Lew, great dummies, thanks for sharing!

The first one has a great headstamp and it doesn’t match any of the documented DWM dummies. Very interesting.

Nice test, the photos are clear and crisp, can you post the instructions for the rest of us in the Admin area? thanks Vic

I had forgotten about this topic until Vlad posted a link to it.

The 487C dummy came from a very old US collection. I have never seen or heard of another one and neither had Bill Wooden.

The Spandau dummy was dug up in Germany about 20 years ago. Three were found, one identical to this one and one with an earlier month on the headstamp. Bill got the other two (he collected highest & lowest dates/lots).

The one piece dummy is one of six that were in the magazine of an early Dutch Luger that showed up at a German crime lab in the 1970s. One other showed up in the US about 15 or 20 years ago and appears to have not been one of the original 6.

I wonder how many other fluted 9mmP dummies the Germans made by the end of WWII???