Has anyone had a round accidentally fire?

Whether it be while sectioning or a pin fire falling on its pin or a sensitive rimfire round, has anybody ever had a round go off accidentally? If so, please tell how.

I have never had one go off ( 50 years of collecting ).
I gave a gun dealer a 15MM pinfire for a clients gun. He dropped it on a cement floor and it went off. He gave me the casing and the bullet. Didn’t find the pin.

I also never had a cartridge go off accidentally, nor have I heard of it happening with the collectors I’ve known. I didn’t collect HE.
One day I had an officer from the police firearms division phone me about a “.303” he was going to section. As soon as he told me the headstamp and the fact the pullet tip had the indentations in it, I suggested he tread carefully, because it was an Italian incendiary load. Must admit it feels good when both police and army officers consider a simple cartridge collector an expert in small arms ammunition.

It’s never happened to me, but I read about a guy lifting weights and he dropped one on a .22 LR and the bullet (barely) entered his skin.

Other than Black Powder cartridges which can throw shrapnel a few feet,a round that fires outside of a firearms chamber will develop very little pressure. Col Julian S. Hatcher goes into great details on this in his book "Hatchers Notebook.
I’ve been reloading for over 55 years now and only heard of one indecent that remotely matches your question.
A guy was using an inertia bullet puller to pull some corroded 8mm Mauser ammunition,Berdan primed. He struck the plastic puller on the floor and the primer cup moved forward and struck the cases anvil. The primer fired and the burning powder developed enough pressure in the sealed bullet puller and it shattered the pullers plastic body. The bullet did not leave the puller. No one was hurt,just startled.

Have had several rounds go off on me while sectioning, but I’m not allowed to talk about it here nor show pictures. House rules!
A few helpful hints to keep all your fingers:
Always know what you are cutting into.
Be prepared for a wrong assumptions and to switch tactics.
Be safe as possible and always remind yourself of this.
Don’t rush and keep your mind on what you are doing.
And make sure you have an extra pair of clean underwear after one goes off!
If you have any questions about what can’t be said, please private message me and will discuss further.
Kevin

youtube.com/watch?v=3SlOXowwC4c
This link to a Youtube video is a SAAMI production for firefighters and concerns about ammunition in a fire. Very interesting and worth the 25 minutes . While not a truly scientific exam of all scenarios it certainly kills a lot of myths associated with ammunition and the supposed danger associated with sporting ammo and storage and fires.
From personal experience; don’t shoot a BB gun at a primer of a 30 Govt. blank…Common sense is not common in 9 year old boys. The primer leaves the case at a very high rate of speed and directly back at the idiot behind the Daisy Red Ryder. On another note, I was an FMF Corpsman in VN and had on 2 occasions cause to extract primers from ‘cooked’ off rounds from several Marines that were injured when belted rounds from M60 MG were cooking off in an Amtrak from a mine explosion. The primers were the dangerous component. The cases were low speed projectiles(the ones that escaped the belt links) and the projectile itself remained near the source of the fire. The belts in this case I believe kept some of the cartridge components contained. The primers penetrated jungle utilities and perhaps 1/4" into the skin. While not lethal, a serious injury could occur. As long as I’m relating war stories, A Marine picked up a dud 20mm round from an F4 strike and carried it in his pocket for nearly a week during Operation Allen Brook. (Must have been a budding cartridge collector.) When we returned to our battalion rear area his platoon Sgt. told him to get rid of it. The Marine insisted it was not a threat and to demonstrate this he struck it against a 12" bunker beam and of course he was proven wrong. He lost his right hand. I can’t see our hobby as a threat or danger to anyone as long as common sense is common.

As most of you know we moved the Tillinghast collection from NH to AZ, & in the process of cleaning up after we moved it out out, a few .22’s inadvertently got put into a wood stove & burned. A muffled pop was the result with no damage at all, to anything. (probably all Merwin’s dish base HA!)

As result of a mis-spent youth I can tell you its difficult to get ammo to go off even when you are trying very hard dropping rocks on it and firing air rifles at it etc. Even when you succeed its disappointing.

I thought I’d post this photo as it happened this very morning! Chrome-tipped 7.9mm B-patr. Not mine and I had absolutely nothing to do with it but a friend of mine pulled this cartridge this morning and this was the result. No injuries…this time.

I know of two cases where a hole was being drilled in a steel case, with a steel drill, and the resulting sparks/hot metal bits ignited the powder. Both cases were larger caliber rounds and both caused injuries.

Attempting to section a live primer can also set it off. Always smart to remove the primer and boil it for about 20min or just boil the empty case for about 20 minutes, then a drop of oil in the primer and let it sit for 24 hours. The boiling probably is sufficient. The oil by its self use to work pretty well but modern primers are usually well sealed and the oil treatment no longer works. I have tried to use acetone or solvent or paint thinner, and got some results on some brands of ammo, but other ammo was totally unaffected. I just quit sectioning primers. To inert a case I usually boil them and then snap the primer in a gun to make it visible that it is inert.

As Jim illustrated, you need to understand the bullet you are sectioning, even small caliber bullets can cause serious problems if you try to section them or even pull them!

Know what you are doing before you start!

Because ammocollectorME might not know: the German B Patrone (B = Beobachtung = observation) counts as an explosive bullet. It has a small firing pin behind what is called an explosive primer (Sprengzündhütchen), plus about 6 grains white phosphorous.

It is obviously a very bad idea to use a kinetc bullet puller on any explosive bullet. As such, it is a special case, different from accidental of the primer that ignites the propellant – which did not happen as you can see.

Jim, thanks a lot for this very impressive photo as a warning how not to do things. 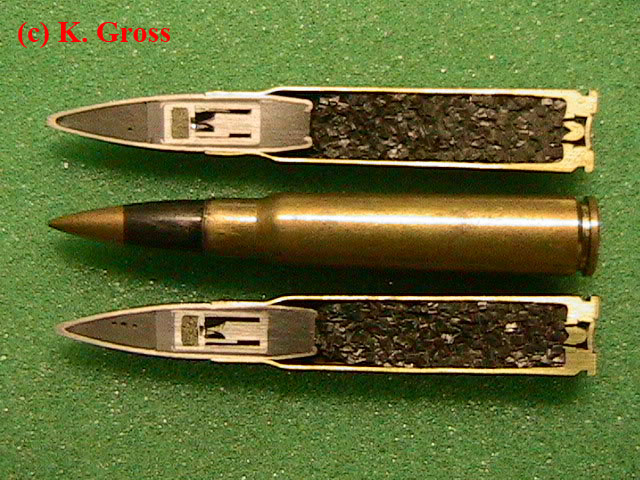 A sectioned example of the B-Patrone’s firing mechanism as described by JPeelen, for those not in the know.
This is Wolfganggross’ work, it seems.

I was pulling down some milsurp .303 British ammo with an inertia puller . . . never again. One of the rounds was a standard VII according to the headstamp but the projectile apparently had been replaced with one of the spotting rounds. A few taps to dislodge the projectile and BLAMMO! The inertia puller survived but my underwear did not. There were several more in the batch and I could lightly shake the round and hear the cup rattle in the projectile bearing witness to the type.

HAHAHAHAHAHAHAHAHA, the puller survived but your underwear didn’t? You just made my day glassparman.