View sectioned variations of it and some info on it here:

I have a question now. Is the cartridge rare? What is the general pricing for one. I have been looking for some up here in Canada and have only found 1 listed for $80. I think this is excessive. Especially when I need five to complete a clip.

I know Canada used the Dotter in the early twenties.

The cartridges are not rare, but not common, or cheap, but $80 seems very excessive. A large number of the .30 caliber sets were procured for U.S. military training use before and during WW1.

The “Dotter” outfits were made in different lengths for the Model 1903 Springfield and Model 1917 Enfield rifles. These generally consisted of two of the barrel insert rods to be inserted into the bore, each spring loaded with a sharp point at the muzzle end and sliding in a brass tube which was a friction fit in the rifle bore.

One rod was made to reach from the bolt face to the muzzle and could be used without the cartridges for basic instruction in sight picture, etc or slow fire.

A shorter rod made to extend from the tip (or meplat…) of the chambered cartridge to the muzzle was used in conjunction with the “cartridge of the month.” In both cases, the energy from the firing pin would push the barrel insert rods out several inches, and the sharp point would mark a miniature target held in a rubber faced block, and after “firing” several shots a group size would be shown. The targets are printed in pairs, with the upper one being used for aiming, and the lower one to record the point of impact, reflecting the difference between the center line of the bore and the height of the sights.

The use of the Hollifield “cartridges” allowed shooters to practice rapid fire, including loading from a stripper clip and bolt manipulation, not just sight picture and aiming.

The complete kit was issued in an oak box with hinged top. Inside were (originally) the long and short rods, a clip with five cartridges, several booklets of targets, and a miniature “spotting disc” to be used to signal to the shooter where his shots hit the target. The rubber faced block for holding the targets was mounted in the wood box, and could be adjusted a few inches up or down to accommodate different height shooters. The box was hung on a vertical surface using a nail or similar thought a hole provided in the box.

Here is a photo showing the box and one of the rods and the target. 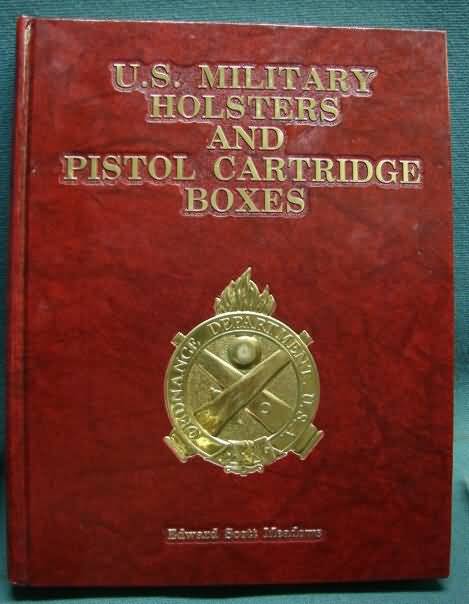 There was also a Hollifield “Dotter” set for the .45 caliber M1911 pistol, but it did not use any cartridges. I have heard that there were some others variations offered, but have never seen any.

These practice cartridges have been made in many calibers -some rare like 8 x 50 R Lebel- and I wonder if someone has a 7.65 x 54 mm Mauser specimen in his collection. Some were ordered by the Argentine Navy early on 1913 but I’ve never seen one.

Revolver Dotters too. This one in 38 Long Colt.

And another sectioned Cal .30. Be wary of any Cal .30 (30-06) Dotter cartridge with late headstamps. Apparantly there are some out there with newer cases that have been rebuilt using original guts. The sectioned one that I showed is one such. I saw it at a gun show, perfect condition, for $25 or so. It had a FA 27 headstamp which I doubted. I contacted Chris Punnett about it and he said it was too perfect to be real and the 1927 date was too late. So, I went back to the gun show and told the guy it was a fake. I thought he would simply punch me in the nose but, instead, he told me, “Gimme 5 bucks and take it.” So I did. I took it home and dis-assembled it. The insides were all original but the case was a newer one. So, I sectioned the case and put the guts back in it and voila, that’s what you see.

The originals, especially the Cal .30, are often in a very used, beat up, condition. So watch out for any that look new on the outside, especially if they have the late dated cases.

I have 4 variations in my collection plus about a dozen others with different headstamps.
The oldest headstamps (3 specimens from FA and 1908) are all on brass cases without holes (pictured utmost right).
The youngest one is the one on the left with a FA 18 headstamp. Most are on FA cases but I have one on a UMC case.

value: always depends on availability and demand, but in Pete’s 2011 auction, one was sold for $75
and I have seen others being sold for that price.

It is completely true that the Hollifield Dotter set made for the M1911 .45 pistol did not use one of
these cartridges, since the auto pistol design can simply use the original firing pin and does not need
the secondary pin of the “primer” of the adaptor cartridge. However, it would be an error not to point
out that while scarce, there are Hollifield Dotter .45 A.C.P. cartridges, although they seem rare,
that are found with both commercial and military headstamps. They were from kits made for .45 ACP
revolvers, where the cylinder made the use of a single, full-length rod impossible to use due to cylinder
rotation. I have a .45 Hollifield in my own collection.

A few other items in my drawer

Looks the bottom left is a .38 caliber, and looks like a couple of .38 cartridges in the drawer above. Are they made .38 Long Colt or .38 Special cases?

Great collection, and I am beginning to think that Pepper DOES have one of everything!

Fred Datig in his book Cartridges for Collectors, Vol. 3, Page 137, shows a .45 Colt (He erroneously calls it a .45 Long Colt) Hollifield Dotter cartridge. I have specialized in .45 Colt for over 40 years and have never seen one. Does anyone have one in their collection?

Great Thread! I have wondered what calibers show up in Hollifield Dotters. I’m particularly interested in Fede’s comment that it exists in 8x50R Lebel and somewhere there is probably one in 7.65x54 Mauser Holifield Dotters from 1913 in someone’s collection!

Fede, Do you have a photo of the 8x50R Lebel Dotter available to post?

Lew, sorry, I don’t have a picture. As a start I made a checklist of confirmed calibers:

Several years ago the late George Murphy did a SLICS display on the “dotters”…but he didn’t have all of Fede’s calibers :)

Argentina evidently adopted this device earlier than 1913 because it is mentioned in “Rifle Shooting in Educational Institutions”, Second Edition, 1912.

This ad is dated October 9, 1913 and mentions “some of the South American countries”:

Here is very interesting article dealing with the preparation of a dummy case to be used as a Hollifield dotter: