How do *You* collect Variations!?

How detailed are you on variations? Is there a point where one crosses the line from sanity to insanity?

Here is a selection of 9mm UMC ball loads, and then some Austrian shot loads

[quote=“Aaron”]How detailed are you on variations? Is there a point where one crosses the line from sanity to insanity?

Lol!
When you manufacture something you never give exact dimensions but always dimensions with tolerances.
I would keep the minimum and maximum dimensions ctges.
The other will make good duplicates
JP

Interesting. And, no, you are not nuts. There are only two types of collectors - those that have crossed the line, and those who will cross the line.

Your series of pinfire shot loads in the picture looks good to me. Now all you have to do is measure them all and calculate the mean, standard deviation and standard error and you will have a short article for the IAA Journal!

Yes, as Ray said one can easily ‘cross the line’.

You are walking in that neighborhood, but when I see the x-rays with the amount of shot counted and weighed; then we will begin the certification process.

Have you added a micro bar code to your inventory control yet? (that might be a clue as well)

You are the perfect webmaster !!!

As a rimfire collector and .22 and Flobert collector, I can only tell you that you have not even come close to crossing the line. When you start counting the specks of fly s**t on a headstamp as a viable variation or when you buy a box of 50 brand new factory .22’s and are able to find 49 variations, only then have you crossed the line. Your shot loads make a nice row in your UMC drawer. A pox on any scallywag who says otherwise, for they are not true annually retentive, shortsighted, slow whitted rimfire collectors such as myself!

Also, the UMC ones are the standard ball load. They are a different set of cartridges from the shot loads.

One thing I was wondering though was that this makes me wonder how these cartridges were actually made.

Some headstamps are always lined correctly with the pin, making me think that somehow the machine knew where the pin was before stamping, or the same machine stamped and then made the hole without moving the cartridge.

Where as the UMC ones are all different, either left or right of the pin or tilted. But they are still all generally facing the same direction so either they were stamped and meticulously checked to put in the hole punching machine in about the same direction, or the machine that stamped and hole-punched was still at the same time, but had a little leeway to move.

then there are others that obviously were stamped separately and then put in any which-way to hole punch.

Anyone know anything about the machines that made these? I can’t seem to find any pictures or drawings of machines or anything.

Aaron:
—I was pondering the manufacture of pin fire cases just the other day after receiving some new pinfire shot shells for my collection. On shot shells, I have noticed that the headstamp is always properly aligned with the pin also. My first hypothesis was that the pin hole was punched in the metal base at the same step that that the headstamp was impressed, then the base wad was pressed in. That scenario fell short because it would require a second punch operation to form the pin hole through the base wad.

—My second hypothesis is that the shot shell is assembled with the base wad in the cardboard tube and the tube/wad unit is inserted into the unsized and not yet headstamped metal base. Then the whole unit is locked together by an annular sizing die that closes the metal base on the tube and wad. Then, possibly at a separate station, the base wad is compressed by a punch that forms the primer pocket and embosses the head stamp through pressure exerted upon the base wad. Subsequently, at the same station, the pinhole is punched through the metal base and the wad, and the pin is started into the pinhole. At this point the cartridge case is fully formed with the headstamp and pin perfectly aligned, and the pin is available to index the case for inserting the primer.

—I have noticed that the primer pockets often appear to be rectangular and some appear to lined with metal. Therefore, the rectangular primer pocket could be formed as above, in alignment with the headstamp, and used to index the case for punching at a separate station. In this manner, headstamps could be located turned 180 degrees from proper alignment, but small errors such as those in your UMC cases would be difficult to produce. Do any of you pinfire collectors posses examples, of a common manufacture, that have both correct and inverted headstamps in relation to the pin?

—If anyone has drawings or photos of the actual pinfire manufacturing equipment, I would be very interested in seeing them also. I cannot explain the variations in pin and headstamp alignment that your UMC cartridges exhibit. I considered the possibility that the case heads were embossed, then hand aligned for the punching operation. This seems unlikely in view of mass production methods, unless such small size and relatively low volume production cartridges were turned out by hand, on presses similar to modern reloading press in order to avoid up front capital expenditures of a full production line. Alternatively, the differences could be caused by movements in the embossing die relative to the pin hole punch.

—Now that I have typed all of that, I am wondering if the large variations in case length might very well be indicative of a semi-handmade item.

—One more stray thought and question: Are small rimless pinfire shells such as yours constructed with a base wad? No base wad would mean that the headstamp could not be embossed per my second hypothesis, and alignment would then be more variable.

I was looking through much of my collection and did not really find what I was hoping to. I had thought that many cartridges were stamped all sorts of different directions, but when I actually looked closer I found this was not the case.

One example I thought of off hand was 12mm Eley brass pinfire cartridges. I knew I had some that were upside down and right-side up. But when I looked at them again I noticed all of the upside down ones were a different case length from the more common rightside up ones. And all of them that case length are upside down. I think this may have been done on purpose as they we packed with the pin facing down inserted into holes in a pasteboard fitting, in rows. This would make it look nicer when looking at them packed in the box maybe?

Then as I was looking at a lot of the others it seems more are slightly varied similarly to the UMC ones than not. Hardly any are consistently level with the pin.

There was only one company I found on my quick look that consistently had the headstamps in random degrees in rotation compared to the pin: ones by Patronenfabrik J. Stahel; of Zurich, Switzerland. All of these I have seen are all randomly rotated. My guess is that these were for sure stamped before the pin hole was placed. Also, though I think it has no correlation, this company consistently has the hardest to read headstamps! 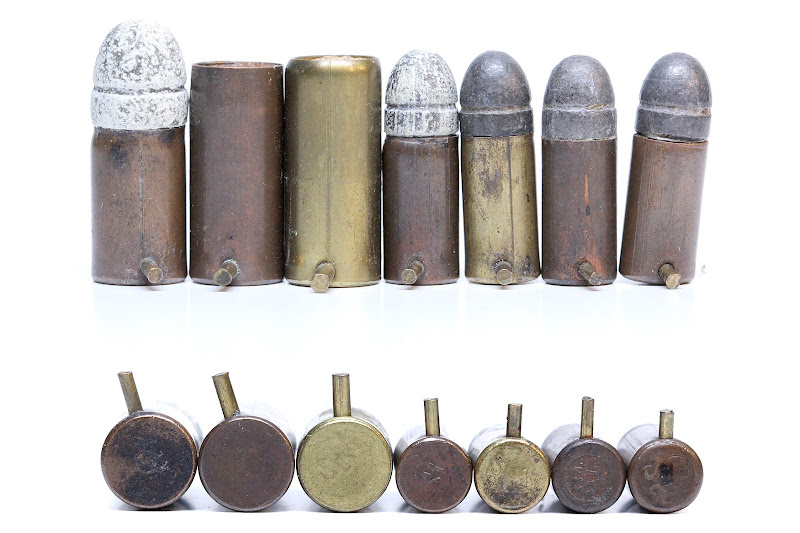 Also, I have some sectioned cartridges. I will take a picture soon of them to show the construction of the head.