I saw this empty box in a gun shop while driving home from the Coeur d Alene cartridge show last weekend. It wasn’t for sale but I did get to snap a few photos of it.

I don’t recall ever seeing a modern U.S. Military ammo box marked as reloaded ammuniton. Have I just lead a sheltered life or is this an uncommon box? I thought it was pretty neat. 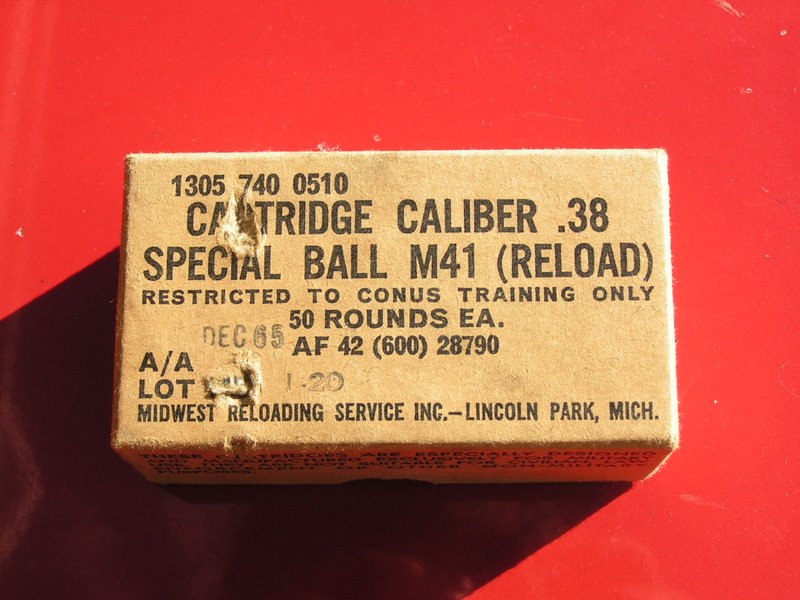 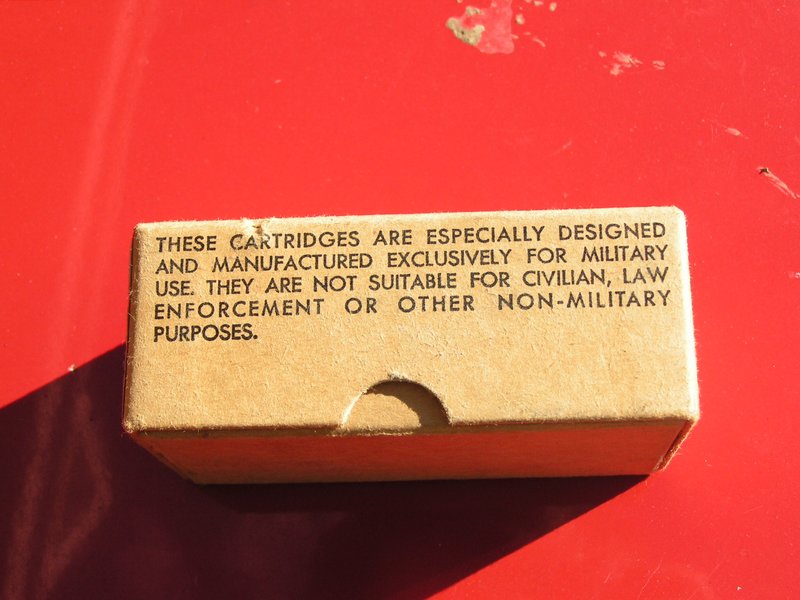 I picked up two boxes of these at SLICS two years ago. Here it he write up I used when I sold one:
“A 1960s attempt to cut costs (some AF guy must have been court martialed for thinking that way…) by using reloaded ammo for training. This was contracted to Midwest Reloading Service and the box reflects that and the contract number, etc. The ammo has the standard M41 FMJ bullets, and a mix of nickeled and brass cases with a variety of headstamps. Many of the primers show some deformation from crud in the primer seating tool. Reportedly the AF was not pleased with this ammo and dropped the idea. Nothing has ever been too good for our flyboys in blue, so spare no expense- let the Army or Navy cut their budgets…”

what is the point of the label saying that the cartridges are not suitable for non-military use, when the cartridges were only .38 Special ball rounds?

Falcon, you never ever want to be using reloads on active service. I imagine the warning is because the rds will have been reloaded for specific Model .38 Spl Revolvers.

That warning appears on many boxes of the M41 ball ammo. There may be a safety reason related to presures or something, but my gut feeling is that it was to discourage pilferage for private use. Just a hunch.

I also thought that discouraging pilferage was the only reason. Wouldn’t they be used in ordinary S&W Victory or similar revolvers? Making pressure differences unlikely. I also think it is unlikely they would be anything specialised if they are only for training.

A very interesting posting. I have never seen any U.S. box like this before, although I have a .45 Auto box from a Philippine Army Reloading plant, that had RPA headstamps and lead RN bullets.

Whatever the reason for the warning about unsuitability for civilian and police use, it is a good warning for any purpose other than punching paper. The G.I. 130 grain .38 Special FMJ RN bullet is about as poor a choice as anyone could make for a self-defense load. Of course, the military have no choice but to use it because of the various conventions against military use of expanding bullets.

Falcon, by the time this ammo was made, I think the Air Force was already using a lot of Smith and Wesson Model 15s, especially in the Air Police, the revolver that originally was called the Combat Masterpiece. Pretty much just a Military & Police Model (Victory Model the same), but with adjustable rear sight and ramp front sight. A very good revolver. I am sure they had M&Ps and perhaps some military Victory Models (in .38 Special, not the .380 British (.38 S&W) caliber which was supplied to England) left in service, as well.