Noticed some of what I suppose is either contract overrun production or surplus for / from Israeli Police on MidwayUSA. 20rd boxes of soft points from Federal, with what is a relatively decent per-rd price for .30 Carb soft points anyway. It is the best price online ($11.49) at the moment for this specific box of 20rds of Federal soft points, which are usually overpriced fairly high vs the 50rd soft point boxes from the import brands. As to why or how MidwayUSA would have this at all - Midway does a ton of dealing with IMI, and this Federal stuff must have somehow come up in a deal they worked out? The sticker on the case has a header from the big police & military supplier in Tel Aviv - “L.H.B. Ltd”, maybe they dealt directly with MidwayUSA?

On the label directly on the 20rd box, my OCR to text translation leaves something to be desired… Help us Johnny ! The big sticker label on the case is just a long list of safety precautions which are normally not so blatant on police / military contract stuff as they are on retail packaging. I assume the headstamp is just standard Federal, but I will find out when my order arrives in a few days. 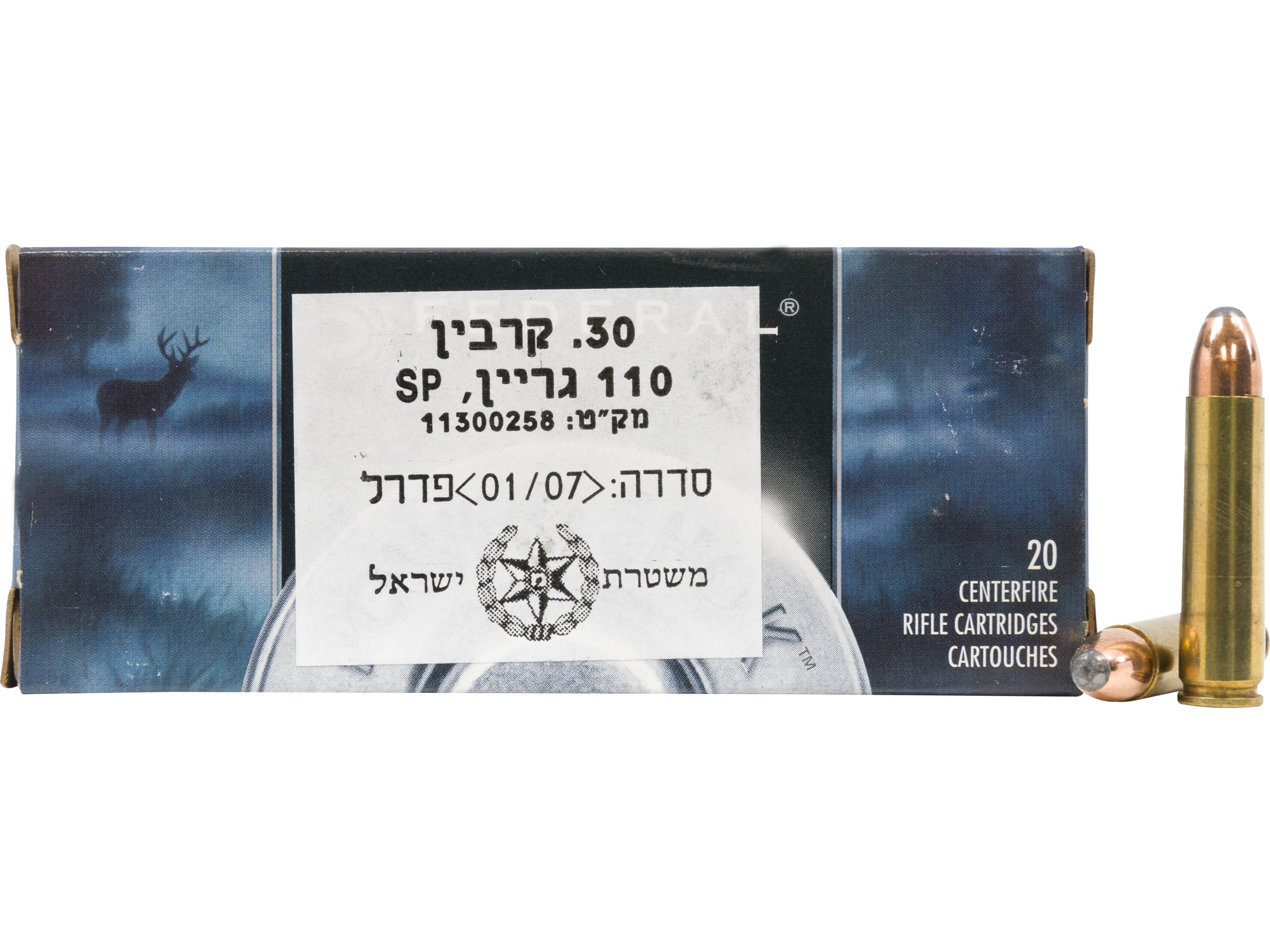 There is also a white box with almost the same label, including the “Star” insignia at the bottom, with ammo actually made in Israel. I have a .30 carbine round, ordinary ball, headstamped “IMI 30 CARBINE” but I cannot say with certainty that it came with that box. I have had it for about 13 or 14 years, and have forgotten now. I should have put a note in the box if it came with only one round to me, describing the round, but that’s water under the bridge now.

The only major difference in my label, which is printed right on the box itself, is the lot number, my box being “02-03” whereas the one pictured is “01/07.” The low lot numbers would seem to indicate that they did not need constant production of this caliber in Israel, although I haven’t a clue as to how many M1/M2 carbines they might have had in service with the police.

First I have heard of this Federal contract.

John, the IMI soft point load was developed for the the Magal carbine, although it could be used in M1 carbines still in service. Check this previous discussion: IMI Box Label? .30 Carbine

There is also a S&B FMJ box with the police overlabel.

The big label is indeed standard warning boilerplate, but it is interesting that the last 3 lines are in Arabic. This ammo might also have been for the Border Guard Civil Defense units, and many in the Border Guards are Druze, who’s first language is Arabic. When I ran a community armory I had 40-50 M1 Carbines in inventory. Not sure how many are left, but since the Magal was never widely issued there hasn’t been that big a demand for carbine ammo.
And yes, Lahav is a big gun/ammo distributor in Israel, and could easily have been used to source a small lot purchase for a police unit.

Fede - thanks for the answer. The date on that thread you reference was at a bad time for me and I probably never even saw it.

I don’t have an Israeli .30 Carbine round with soft-point bullet in my collection, so all of that information was new to me.

Jonny - Thanks for your information also. Very interesting. Do you know if the Magal was capable of launching any kind of rifle grenade - teat gas (logical for police) or otherwise? I had heard that the police had more M1 Carbines than they did Magals. Don’t know if that was true or not.

I got to play with a prototype Magal in the early '90s and really liked it, but I’m not sure if it was ever issued as a standard weapon. I think they’re all gone now. The police didn’t use M1s, at least when I was there and involved, just the Civil Guard, and others in need of a long arm for escorting tourists and field trips. Local armories and schools had them on hand.

Does anyone know why some of the images are blurred out on this (and other threads) when you attempt to print them out? Printing out information from this forum seems to be getting more and more difficult? I know I have mentioned printing problems before, but this seems to be a new phenomenon. There are many forum users that print out threads of special interest to them, for easier retrieval later.

It seems not all users have this problem. In my opinion the best way is having a competent person going over your computer configuration. There are simply too many possible error sources.
My browser is Firefox 65.0.1 on Windows 8.1 and the “printer” is a software called “do PDF” which creates a PDF file. I “printed” this thread by hitting CTRL and P and it shows the images in the same quality as on the screen.
My setup is by no means trouble-free. Its very much dependent on how well the website is programmed. But so far I did not encounter blurred printed images that were OK on the screen.

Harrie, who is the manufacturer of the boxes in your images?

I received this ammo yesterday, and it is 100% typical as far as the headstamp and everything else for a Federal .30 Carbine load. It is just the stickers on the box that are different. In my efforts to find a loophole around MidwayUSA’s free-shipping option not allowing full cases, I wound up with 10 loose boxes, and no outer case package which is what I most wanted. I had figured if I just put a quantity of 10 individual boxes, that the warehouse worker would just throw a case in the shipment, despite the full-case sku not being allowed with the free-shipping promotions they are always running. Nope, they just sent 10 loose boxes. This stuff sold out in 3 days on Midway as far as I can tell.