This grenade came from the collection of Col. Jarrett, head of foreign tech/intel ,Aberdeen PG. and has an old label- experimental Jap(anese) grenade. It is my theory that it is a grenade designed to be fired from a 25mm flare gun. Any ideas ?
The base of the stick is a felt washer set on a metal base and cap.

I’d hate to be the one HOLDING a flare gun firing that, the recoil would likely take it out of your hand. Could it be that this was for a last-ditch grenade projector, similar to the “knee mortar”, only in 25mm? It appears to use the same grenade body as the issued hand grenades, so they were probably looking to use what they had on hand. Is there a projecting charge at the bottom of the spigot/rod?

The Germans had similar grenades . Would surely need a stock of some kind. IndoChina was heavy with French weapons which the Japanese captured including 25mm flareguns and they had their own in this caliber.

I’d hate to be the one HOLDING a flare gun firing that, the recoil would likely take it out of your hand. Could it be that this was for a last-ditch grenade projector, similar to the “knee mortar”, only in 25mm? It appears to use the same grenade body as the issued hand grenades, so they were probably looking to use what they had on hand. Is there a projecting charge at the bottom of the spigot/rod?

THIS WOULD HAVE TO BE THROWN USING A BLANK OF SOME SORT.

Solid stick with obturation at the base.

I just began reading Lt. Col. John George’s book “Shots Fired In Anger”, detailing his experiences on Guadalcanal and elsewhere in WW2, and there’s a passage in there that made me think he might be describing this item;
"The Jap mortars were mounted close to us, for as I walked along, crouching low in the open areas, I could clearly hear the champagne-bottle “pops” on the other side of the crest. Each time we would all duck and wait for the knee-mortar shell to come rattling down through the leaves and branches. Most of the “shells” were really grenades fitted for launching from knee-mortars (more properly called grenade launchers). They were a feeble sort of affair, loud in explosion but dangerous only when they scored a direct hit on a foxhole or made a lucky strike with a fragment. They would usually sputter before they went off and give ample warning of their presence, and though they did kill a few men they were far less effective than our own grenades. The regular knee-mortar shells were entirely different. They carried a much larger charge of explosive and were many times more destructive. Built smooth-sided and bottle-shaped, with an expanding flange to fill the the rifled grooves in the mortar tube, they did not tumble in flight, but nosed over naturally and detonated with real authority the instant they struck the earth."
So, he seems to describe both of these items as being launched from the same projector, and would’ve had ample opportunity to see plenty of these things; if they were in use in 1942-3, there should certainly be some sort of pictures of them in use SOMEWHERE.

Some of the Japanese frag grenades were desiged to take a screw on propelling charge and could be fired from the 50mm Knee Mortar.

FIRST ON THE LEFT IS THE JAPANESE HAND GRENADE WITH ADAPTOR FOR FIRING FROM KNEE MORTAR.

Here’s another shot at this one:
I recently got a copy of George Markham’s “Japanese Infantry Weapons of World War Two”, and he describes something called the “Type 98 mortar - kuhachi shiki keihaku gehiko”, which seems to correspond to your pictures and description. He doesn’t have any pictures, but I think I’ve found one on the net (below). His description goes as follows:
“The 50mm Type 98 mortar, introduced in 1938, fired a large stick bomb rather than a self-propelling shell or conventional finned bomb. The large cubical metal-case charge was mounted on the tip of a long wooden rod that went down the barrel. The metal rod tip rested on the propellant charge. Incremental charges, or the attachment of a regulator to the muzzle to control the bore intrusion of the rod, varied the range of the grenade. The barrel was raised by a sliding collar attached to the bipod and locked at the desired point; traverse merely entailed unscrewing the wing nuts holding the bipod to the baseplate and sliding the feet to the desired position. A simple friction-ignition firing unit was used. But the weapon was very crude and probably not mas-produced until the 1940s.”

He seems to be describing this item:

Although the warhead in your pictures seems to be off the standard Type 91 hand grenade, it’s likely that all of these bombs were threaded for the same thread size, and by the time they were producing these, they needed all they could get, and yesterday; substituting a grenade body for the standard warhead shown in the picture above would have also added to the range. The base of the rod seems very close to what I remember of your pictures as well. Hope this helps.

The base of this 'grenade" stick looks similar to mine with that small botton sticking out. The frag head of mine is smaller in diameter than any of the standard Japanese grenades of the era. I would like to see some measurments of this weapon’s bore and the rod as well if you ever see any.

The bomb employed with the Type 98 mortar is MUCH larger than the experimental grenade John has. Here are a few photos of the example at the Oregon Military Museum. You can get a feel for its size from the Navy “talker” helmet and 20mm Oerlikon magazine behind the mortar. The wood shaft is just a bit smaller than 50mm in diameter and the metal box for the main charge is 6" or 8" square. 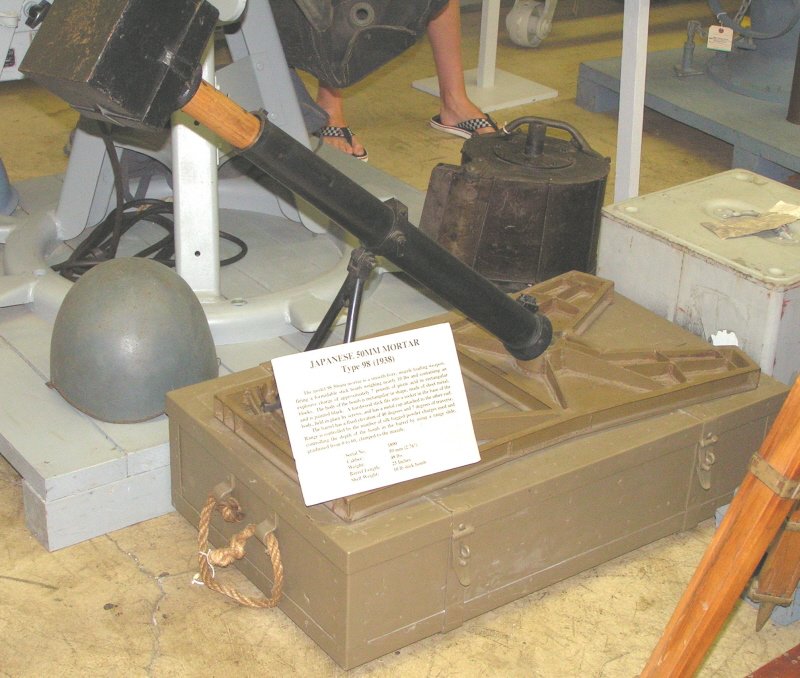 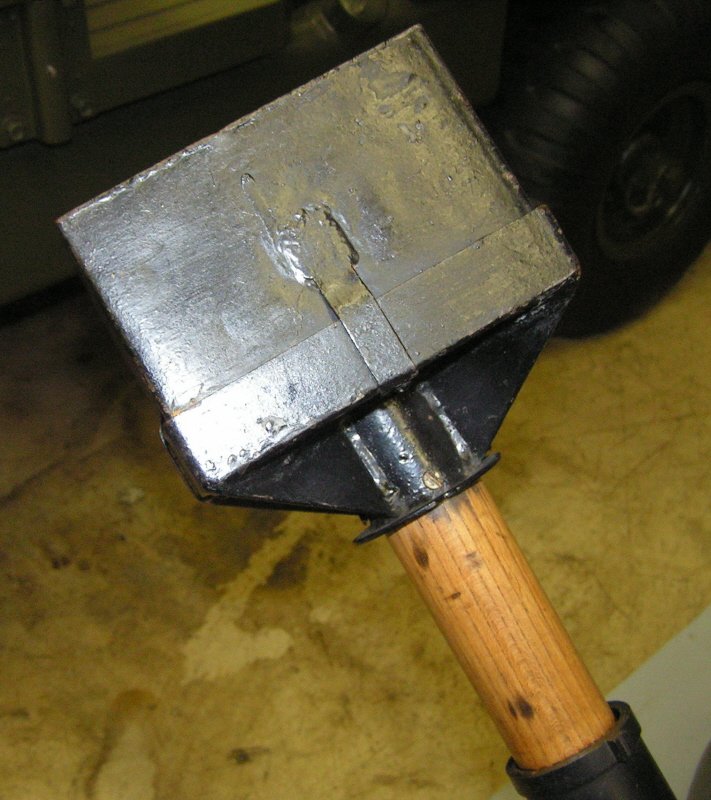 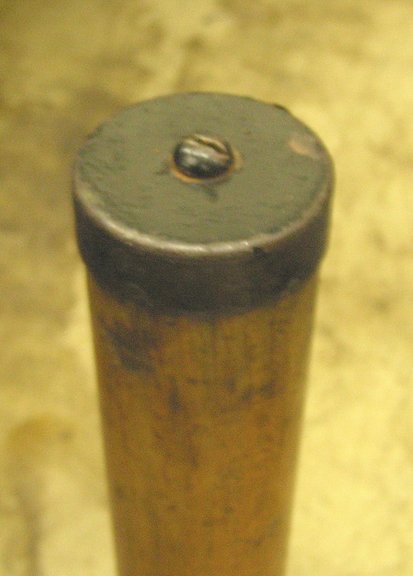 Sorry those last two are a bit fuzzy but you can see this stick bomb is about 2 feet long and much larger than any rifle or pistol grenade could be.

Thank you for the excellent photos. My “grenade” has a 25mm shaft. The base cap looks similar but is not a screw .It is a raised dimple. The base cap also has obturation washers.

I am looking for a Japaness one inch flare gun with a stock although captured ones from any other country could have been used. This is a factory made item. Co. Jarrett was never able to run it down but maybe we can.

This is the German flaregun style pistol which throws a grenade on a shaft. Does anyone know if the Japanese used a simliar weapon or obtained some of these from Germany ?

And, yet a THIRD shot at this :-); this page (carbinesforcollectors.com/japflare.html) shows the primary flare pistols used by Japan, which were in 35mm, 28mm, and 20mm calibres, but none of them show any sort of a shoulder-stock (or provision for attachment thereof). Towards the end of the war, it’s likely that they would’ve considered using the single-barreled KFC/Kawaguchiya type as a sort of grenade launcher along the lines of the German type above, but with a stock added.

They also captured lots of French and Dutch flare guns in IndoChina. Did these folks have anything in one inch with a stock?

I have been advised that Japan obtained a number of these guns from Germany. Does anyone know more about it ?

I know nothing about this but, WOW, it is a super interesting thread. I hope someone tracks down this information to this mystery.