Hi Dave,
this could be of interest for you
I don’t remember what it is, sorry
jp

Another one.
I don’t remeber either !

this one I remember !
It is for a scarce ctge, therefore it must be new for you.

I don’t know what he first one is but the second is a K-11/K31 Swiss 7.5mm speed loader made from cardboard. The third one looks like a 6.5 Italian Carcano clip.

the second doesn’t look like a regular K-11/K31 Swiss 7.5mm speed loader made from cardboard.

Hi Gyrojet,
check the grooves on the magazine.
They don’t look like as on a regular swiss magazine (two instead of one)
JP

[quote=“jean-pierre”]Hi Gyrojet,
check the grooves on the magazine.
They don’t look like as on a regular swiss magazine (two instead of one)
JP[/quote]

The width of the inside of this charger is much too narrow for the 7.5 x 55mm cartridge.

I’ve no idea what the top one was for, I can’t work out quite how you would use it.

The middle one is a 5 round charger for an experimental 6mm Mannlicher self loading rifle.

The bottom one is for another early self loader… i think! I’ve seen one of these but for the life of me I can’t put my hands on the reference to confirm it.

The cartridge shown for the third one is the: 6.5x57 Persian Mauser

The first is a very odd looking one. I have seen a photo of a 6-round charger looking just like this this but showing a small projecting lug in the middle of the base, suggesting that a deep reach is needed before it can be stripped. Perhaps it is for use with a mag loader?

The second one surely must be Swiss. Dave is right that it seems too narrow for their 7.5x55 rounds

It should be precised that the first line drawings come from the excellent works of my late friend Jacques Barlerin., who passed away one year ago.

I think that [b][i]this should have been said.

Some people are very fast to impersonize other people’s works, especially when they are no more with us to say anything. This is something that I cannot admit.

a) You are right.
I forgot to say where the drawings were coming from.
But, as you can double check in the other posts where I put some drawings of Jacques, usually I don’t forget !
Therefore thanks to have repaired this omission.

b) You always tell jacques was your late friend.
One time is good, too many times would suggest he was not the friend of some other people !
Specially when you suggest later that “Some people are very fast to impersonize other people’s works”

I don’t know about who you are talking about !

If it is about me, know three things :
a) I never said the drawings were from me.
Even when he made drawings of ctges of my collection.
b) I usually always put reference to him except in this topic (see $a)
b) I think I was a lot better friendly with Jacques than you were with him.

He used to make a lot of drawings for your articles, spend a lot of time giving you info by phone, because he was a very nice guy and was thinking about the interest of the collectors reading you.
But only that, nothing more.

The big difference between Jacques and some other people was the fact he liked to share his documentation and knowledge instead to keep them selfishly for himself.

And please stop complaining (and I am nice !) in the French newspaper that (when you find info in this forum coming from me you don’t already have) I should better put info in the French bulletin instead of putting it on the IAA forum.

Does anyone actually know what that third cartridge is?

If the cartridge and clip are to the same scale it would seem that the clip had a capacity of 8 or 9 rounds which is odd in itself.

Enfield56 - I already stated in an earlier post that it is known as the “6.5x57 Persian Mauser”

JJE, I cannot answer your question as I don’t have enough info. However I can give you more info that may help.

Here is the SFM factory drawing that identified this as a “6.5x57 Persian Mauser”. 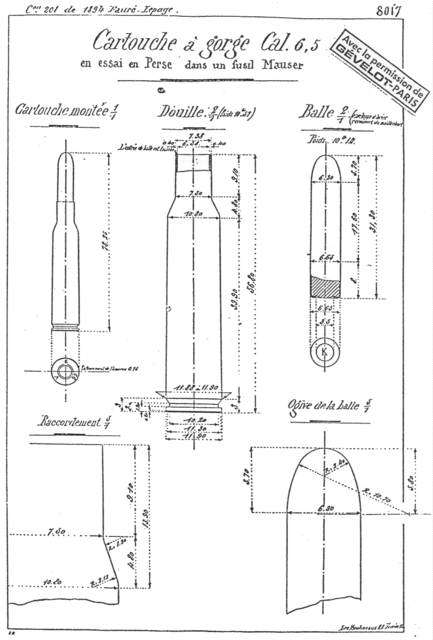 Here is an actual example. 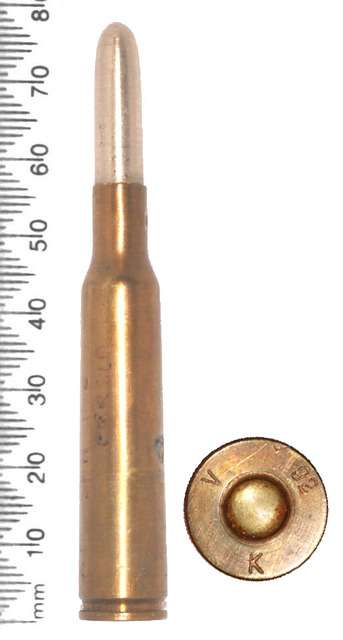 Here are my latest notes on this cartridge:

This cartridge appears to have been originally intended as a military calibre as shown in SFM factory drawings (it has an 8000 series SFM factory drawing number). The SFM case drawing 8017 (see images) shows a “K 92 V” hs but examples exist with a “V 92 K” hs. This hs looks most likely Keller (ie K) or possibly Kynoch of England but Keller is generally regarded as the manufacturer.

1892 is fairly early for a rimless case, especially with the smaller diameter bullet. By 1892 the only official government rimless cartridge was the 8x57J Mauser which had been adopted in Germany.

This drawing included the following text: “Cartouche A gorge Cal. 6,5 en essai en Perse dans un fusil Mauser” (meaning “Cal. 6,5 Cartridge for testing in a Persian Mauser rifle”). Also the text “Can 201 de 1894 Faure-Lepage” meaning this was produced for the Lepage family in 1894.

This case appears similar to the 6.5x57 Berthier by SFM. The ECRA database originally showed both no hs and SFM hs examples exist. Also in the ECRA database a so-called 6,5x56.5 Roth experimental for Persia also exists with "GR * * * " hs and similar case diameter but with a closer to normal neck length of 7.5mm. This may just be M17 (Roth case #637 c1898).