In March of 1938, after the “Anschluss”, control of the company, Hirtenberger Patronen Zunhutchen & Metallwarenfabrik A.-G. of Hirtenberg, Austria was incorporated into the Wilhelm Gustloff Foundation, which was a group owned by the Nazi Party.

During this timeframe they typically used the letter “G” as a manufacturer’s mark on the headstamps, but also continued using the “H” for cartridges only produced in small numbers rather than replacing the bunters.

By April 3, 1945 the plant was mostly devastated from the war and fell into the hands of the Soviets and was quickly put under control of the USIA (Administration of Soviet Property in Austria) and the company again renamed to Hirtenberger Patronen Zunhutchen & Metallwarenfabrik and eventually started production of cartridges again in 1946. 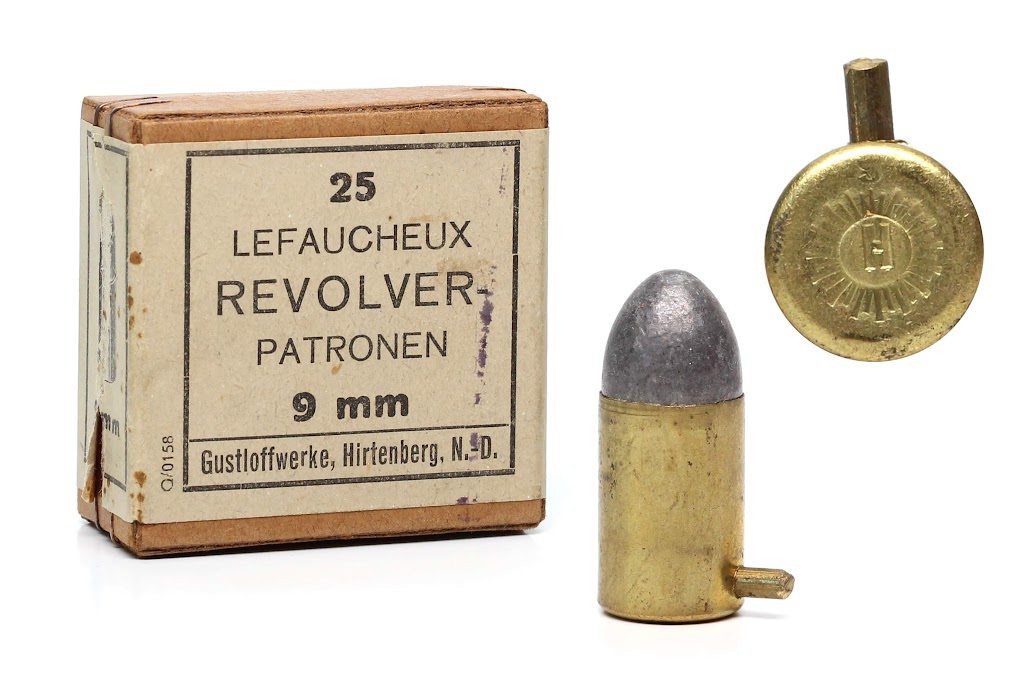 Very good photo and information Aaron! Thank you very much for this, as I will have to be on the lookout for this headstamp.

Aaron, after HP was incorporated into Gustloff-Werke many cartridges of earlier manufacture were repacked and put in the market using new labels. Unless someone is lucky enough to find documentation indicating that they continued to manufacture pinfires at the Hirtenberger factory, in my opinion it is unlikely that Gustloff have ordered a further production of this kind of cartridges during the war. Regards, Fede.

Hirtenberger’s company history they made says they did, but then again that could just be based on them finding boxes

And the box was definitely made then, for pinfires, but I guess there is no way of knowing for sure when the cartridges were made.

Also, Dave, this is a pretty common headstamp that Hirtenberger made for years, before this time period.

Whereas the Nazis were in the habit of seizing most all firearms, but they also would have needed the local authorities / prison guards to be armed, could there have been anywhere where these personnel were relegated to pinfire revolvers somewhere at some time, and needed ammo for these guns? That, or a very limited collector / film industry market is all I can think of as to why they did these.

Just to add that Wilhelm Micke’s 2014 book* mentions this cartridge and shows a box dated 10-44 exactly like the one Aaron shows us. He mentions also that this box (and another containing 30-06 copper nosed) is shown as examples of civilian production at Hirtenberger during the war.
Soren

It’s worth mentioning that some Gustloff boxes with WWII dates contain SOS brand cartridges made at Lichtenwörth in the late 1920’s or very early 1930’s. This is a clear example of a cartridge of older manufacture that could be interpreted as of “wartime manufacture” because of the date printed on the label.