While not necessarily “new”, I simply forgot all about this Steyr clip (and I thought it was a misstruck H).

Anyways, it’s an X in a circle. Digging through info here I found that Fischer & Rossman of Berlin made M.88 clips and used an X stamp.

Then on this site (https://forum.ioh.pl/viewtopic.php?p=401947) I found a picture of the F&R X stamp, and it looks pretty danged similar to the ones found on the Steyr clips.

So, what do y’all think? 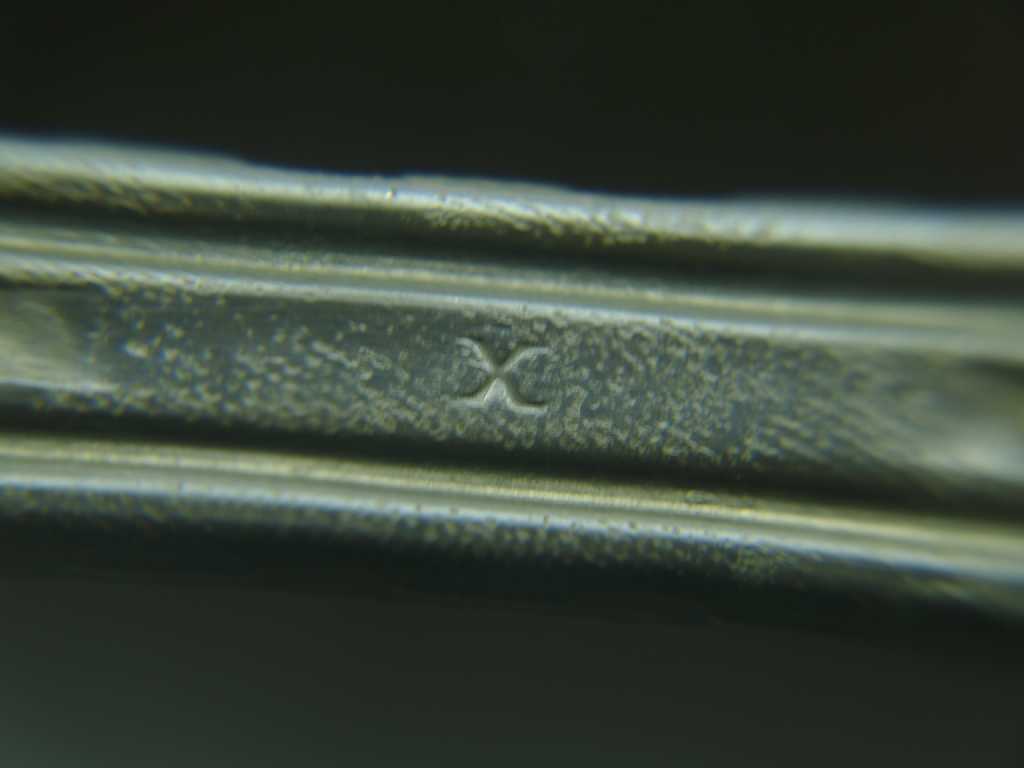 I cannot comment on the clip marking, but the company name is “Frister & Rossmann” (Rossmann is really Roßmann but I doubt you have the ß on your keyboard).

If the letter is cyrillic it might be Hirtenberger production for Bulgaria. Jack

That’s interesting. Haven’t heard of this before. Do you have any more information?

I do not think that is a Cyrillic letter. The only one close to it is the Cyrillic “H” which is properly formed just like Upper-case “H” in English, although in Cyrillic it represents the sound “en”. The two sides of the figure on the clip resemble those of the Cyrillic letter representing the sound “ZHE” but it is missing one vertical element on the clip to be that letter, and that is a straight, vertical line between the two curved lines and crossing the enter bar connecting the two curved lines. It does not look like the Cyrillic “X” to me.

Jack, as far as I know the cyrilic letter Kha (Х) was not used in the Bulgarian alphabet. I believe that you are confusing this with the 7.62x54R ammunition and clips clearly marked X made by Hirtenberger for Russia.

Oops, I typed M.88 instead of M.98 for the clip image. Sorry guys, I’ve corrected it above.

Fede: Before posting that comment I checked a Bulgarian cyrillic alphabet available on the web, and it did indicate that the cyrillic letter resembling the latin X represented an aspirate H, pronounced something like the ch in Loch Lomond. The various Slavic languages employing the cyrillic alphabet have made revisions, large and small, over the years to the versions current in each country and perhaps this is such a one. I was assuming this clip is pre-1914. Jack

Jack, sorry, you are right, I don’t know how I reached this erroneous conclusion, every alphabet that am I looking at has this letter.

In an intent to be more useful, here is an image of the cyrillic “X” found in Hirtenberger 7.62x54R chargers:

Russian Cyrillic has the same “X” denoting the sound “HA”. In context with the other clip, where the circled letter is clearly “X” I suppose the first one shown could be a highly stylized version of that letter, although it looks quite different than the present-day form. Perhaps that is not unusual with Cyrillic - I simply don’t know. Languages, written and spoken, do change of course.

So, if that is the case, I apologize for my entry that indicates it was not a Cyrillic letter. I still have some doubts, but I can see the possibility, for sure.

John, the Cyrillic “X” is transliterated into English as “Kh”.
As the Russian language has no equivalent to the Latin “H” and they normally use the “Kh” or in seldom cases “G” (with some words observed more often with some less).
The most prominent example in Russian is their pronounciation of “Hitler” which is then “Gitler”.

So as they can not say or write “Hirtenberger” in Russian, the spelling “Khirtenberger” (transliterated back) is used.

Does anyone have a picture of a Frister & Rossmann Model 88 clip?

EOD - am not challenging your interpretation of the Cyrillic “X”. I know that you are fluent in Russian. I see that Fede had it as “KHA” and my list, which comes from Pennsylvania State University, Language Department, shows it as “HA” They show the Cyrillic Letter “K” as representing the sound “KA.” It is that list that my answer was based on.

These transliterations are always confusing. No two lists seem to ever show the same sound representations, even when both lists are from a very scholarly source. By the way, I recognize you as a “very scholarly source” for all things Russian (and many other things as well). :-)

John, no worries. I am well aware of my limitations in languages - and this is including German too!
So far I am basing my transliteration on what is given in US military documents (what is a good basis I think - in particular when related to our subject) and many other official sources. In the past I never had a problem with this system.
Also we need to clarify that there is a “transliteration” and a phonetic version which is different and is actually reflecting what you gave above. These are two different things then.
For the scientific way I would stay with the transliteration.

As an example you may check this site and there the table further down.
Few variants give other transliterations but the majotity (including the more international standardized ones) are on “Kh”:
en.wikipedia.org/wiki/Romanization_of_Russian

As for Fede’s entry:
Also we shall keep in mind that transliterations from Russian into other Latin scripts is differing from language to language. Just to make people aware that Russian to German will be different from Russian to English or Russian to Spanish or, or or…
Often mistaken by many people!!!

Translations can be very subjective, particularly between different scripts. I noted with interest that Erbil in Iraq is regularly also spelled as Irbil and Arbil in the news media. And, of course, they are the “EXPERTS”!

Lew, while not knowing anything on Arabic except for the figures I heard from LE and related people that Arabic transliteration and translation of names (if the latter is to be regarded as such) is a sheer nightmare as the name of a single wanted individual can be spelled or pronounced in about half a doozen ways at least + the often similar appearance due to large beards etc. makes it often too easy for suspects to deny everything (in particular when no biometric data and DNA is available).
If entities from different countries have to cooperate then often the said difference between transliterations is not supporting the whole thing either.

Not sure if it’s relevant, but I’m currently reading Leon Uris’s “Haj” (1984), and a character in the 1920s-40s has a “Frister & Rossmann” sewing machine that they got at some point out of England.

Yes, the company was founded for making sewing machines. By the way 150 years ago, in 1864. They also made typewriters.

In the absence of any evidence tot he contrary I’m going to go ahead and declare the X in circle marked clips to be made by Frister & Rossman.