I have now heard back from many people, as well as the potential location to do a northeast cartridge meeting, and it looks like the only date that the location can host is also generally compatible with most all who responded to my earlier emails and postings.

It will be Saturday, Nov 12th from 11am to 6pm at the “Manchester Firing Line” at 50 Gay st in Manchester, NH.

It is free to all, but I’ll have a donation jar out to defray the cost of rental for the large lobby space (it wasn’t too much). This is a good fit location wise to be central to most northeast IAA members, and is obviously a gun/cartridge friendly place. There are 20 or so people who expressed interest, and we’ll try to have 15 or so tables set up in their 35’ by 30’ space (so I was told, - I’ll bring extra tables). A couple people had said they could use two tables, while most just wanted one, but some will just share a table (like myself) and it will be casual like this since it’s all free. This will be informal, and just a way for us to get together and meet & swap / talk. There will of course be all the daily shooting range traffic going through which is fairly busy being Saturday, and hopefully we will get some new IAA members signed up or people will sell some stuff they are trying to offload to new prospective collectors (I hope). The range opens at 10am and closes at 8pm, so people can stay later than 6pm, but 11am should give time for set-up and people driving. There is also the option of shooting, and they said there should be open range time if anyone wants at $16.00 per hour.

The location is the “Machseter Firing Line” at 50 Gay st in Manchester, New Hampshire. They refer to this as their “old location” since they have another new location on Brown ave.

Please take TONS of photos of the show for those that can’t make it, Matt! I bet it will be a great show. Great job putting this event together.

Will do on the photos! This was actually Dave Kuchta’s idea that I tried to make come alive, so we owe him thanks.

I am actually rather excited about shooting there also since they have a “best on the east coast” range, so they say. That may be their other facility in town? - we’ll see

Best of luck with the event! I hope more regional shows will spring up.

I won’t be able to make it so can you please send me a list of all the good cartridges that will be for sale, especially the ones that I may be interested in buying. I’d like to get the list before the show opens. ;) ;)

Good Luck. Thanks to Matt and Dave for the effort required to put on the show. Anyone who’s ever put together a show of any kind knows how much behind-the-scenes work it takes. It ain’t easy!

I would be very curious as to who thinks they may be coming!

I’ve heard a rumor that Dave Call, and a friend of his, are planning to bring a couple of tables.

The show in NH was yesterday, and to sum it up in a few words - “It was a blast!” (more on that later). The Manchester Firing Line was a great host, and they had plenty of room for us and then some. They had all the tables & chairs set up at their 2nd range site since they had just done a Glock course there that week. The “old range” and “new range” were about 100 yards from each other and the new range was a site to behold. They must have had over $1,000,000 worth of various military rifles and machine guns in the new range with every possible model including miniguns! There were just over 20 collectors and table holders who came & went with everyone buying & selling some good stuff, while educating and talking to some of the daily range traffic as well. The primary range was so busy there was a 2-hour wait, and the over-flow was coming to the range we were at. One great highlight of the show was when the proprietor (Jim McLoud) brought over his Pederson-device Springfield rifle and passed it around to us all and relayed stories of how he had fired it on the range!

Range proprietor Jim seen checking out Pete Shirley’s 25 Stevens display, note the Scarface poster on the wall which his son explained to me was relevant due to the fact that they owned the original movie prop under-barrel grenade launcher used on Pacino’s gun from the movie (and also owned the original XM16E1 / M16 used by John Wayne in the movie “Green Berets”):

Here is Jim with his Pederson rifle - Thanks Jim!:

Jim’s son seen here setting up a customer with a full-auto AK Krinkov rental, which caused a hellacious / invigorating bunch of blasting in the adjacent range. Jim’s son (his name escapes me) is a world-class shot, and has previously served as a sniper with a special-forces battalion overseas:

Some of Hal Fergusson’s 44 Henry rimfires:

Some of Ted Bradstreet’s links:

Thanks to all the collectors who came out and helped make it a great little show! One of the best things about the show was our host Jim who expressed interest in what we were doing and even brought out some nice ordnance to show the guys (along with his rifle). He explained how he had just purchased a large property with a building which he would have available next year and which would have a show space twice the size of what we were in, and this space would also have a balcony-style upstairs where many gun customers would be in & out of. This sounds like a great potential venue with a lot of built-in walk-ins which would most likely take an interest in something like a cartridge show. He has big-plans for it needless to say, and if it is run anything like the newer range that was across the street from where we were, then it will be a hit! We look forward to the potential of a New England cartridge show next year, hopefully in September before hunting season.

Here are a few photos of the guns at the newer range across the street. We were not in this range lobby, but many of us saw it, and it was a site to behold: 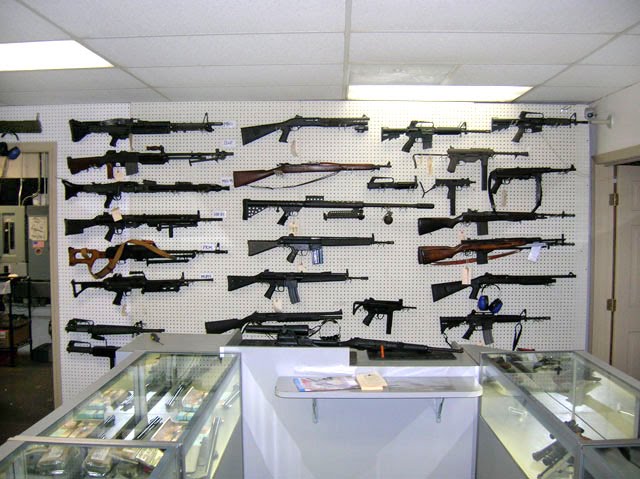 Wow, is that a museum or shooting range? Are those all semi’s or as they came? Rentals?
Lots of familiar-looking head tops. Looks like a great get-together.
Good on ya’ Matt.

Jon - as far as I know they are all select-fire full-auto, and any can be rented. I’m sure there’s a few semi-only guns, but the full-auto rifles are a big draw for things like bachelor parties and whatnot. I was told they average 5 or 6 bachelor parties a weekend, along with hundreds of other random range shooters.

Just GREEN with envy I really feel isolated up here! What a way to spend a day! Vic

That was a fine collection of machineguns. I think we all got used to the shooting after an hour or two.

I want to thank Matt for doing all the work organizing this meeting. He is a credit to our hobby in every way!

I had a great time and there is no doubt we will be trying to get something bigger going next year. Thanks to all of you that came out! I enjoyed buying, selling, trading and shooting the breeze with you.

The show looked amazing! You guys really did a great job putting together. Thanks so much for taking all the awesome photos for us who could not make it.

Seems like you had a good show there. Wish I could join, but too hard to get anything back to Europe. Looks like a nice range too, with lots of nice weapons to rent. Thanks for sharing the pictures.

That Pedersen rifle is really nice. Does he shoot it or does he consider it too valuable?

He told us that he had once shot 5 rds through it on the range, so he has at least that much put through it. I think his particular scale of “too valuable” is quite different than most people’s, at least as far as comfort level. He had no problem comfortably handing it around to us and I would wager that if for whatever reason it were damaged or broken, then he would probably figure “c’est la vie” and just buy another one.

DK - He would have trouble “buying another one.” While the unaltered Pedersen Rifles are scrace, they
are found with some alterations that can be “put back” fairly easy. But to find both the rifle and a working, good
condition Pedersen device is difficutl in the extreme. They are very rare.

Some don’t realize their was a Pedersen device made for the Mosin Nagant M91 “Three-Line” rifle, and the M1917
"Enfiled" as well. William B. Edwards used to have one of each, including a Springfield, in his shop “Gold Rush Guns” in San Francisco. He also had a factory Lucite Walther PP instructional model that I hounded him to look at evey time I was in his store.

I don’t want to raise any hackles but just want to make a comment regarding the “Pedersen Rifle”.
The rifle shown in the pics is a Mod 1903 Mk1 Springfield Rifle, with a “Pedersen
Device” attached.
As far as just going out and getting an other, well John hit it on the head. A clean Mk1 is in the $1000 and up range. But being the bored, stuck at home for the day with nothing better too do… I found info of a estate sale in 2008 where a complete Pedersen Device, less the rifle, sold for $55,000.

Frank is completely correct in calling us out on the term “Pederson Rifle.” The Pedersen rifle is a toggle-type
semi-automatic rifle and has little or nothing to do with the Pedersen Device. I should have know better, since
the Store I worked at most of my adult life, the San Francisco Gun Exchange, had all the remaining Vickers Pedersen Rifles, cal. .276, that had notactually been used in British trials. There were carbines also. Martin B. Retting had the guns that WERE used inthe trials, so our rifles were in better shape, but Retting got all the charger clips! We had to get one of the clips from him just to go with the rifle we kept in our store collection.

Thanks for the correction Frank. It is not nit-picking on a Forum like this to challenge improper terminology.