Yesterday I have bought a few 7.62x39 cartridges in a collection. And one of them looks very strange. In a photo it in the midpoint 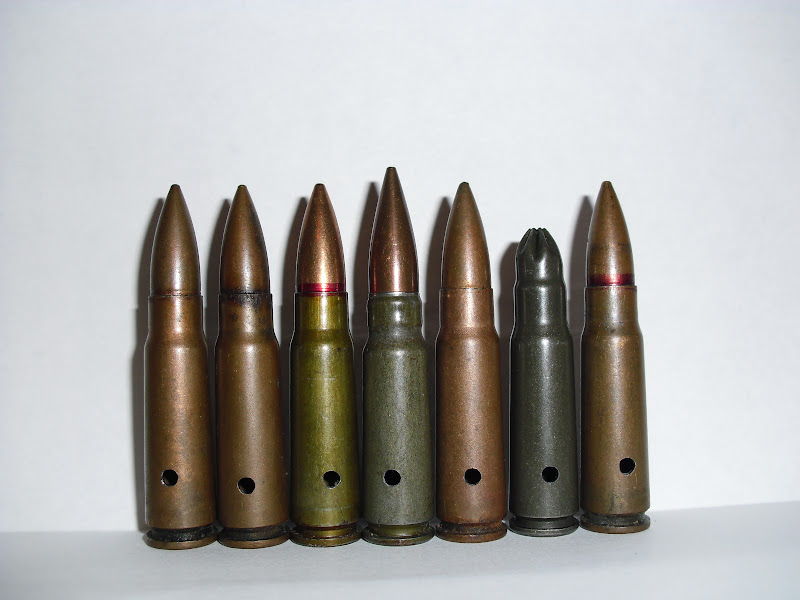 This cartridge in the single copy and I don’t want to disassemble it. The cartridge has a headstamp “bxn 62”. I assume that someone has inserted 7.92 bullet into a usual case. Probably it was made by criminals which had no usual cartridges. But the bullet is fixed very thoroughly and qualitatively and I have doubts. It can be the early Czech experiment with subsonic cartridges?

What is the measured diameter of the bullet? Does the primer on that case look original or fired?

Wouldn’t the projectile then be seated deeper as it was done on other such subsonic experimentals to get the correct OAL?

Did you measure the exact diameter of the projectile? Would be important to know this. 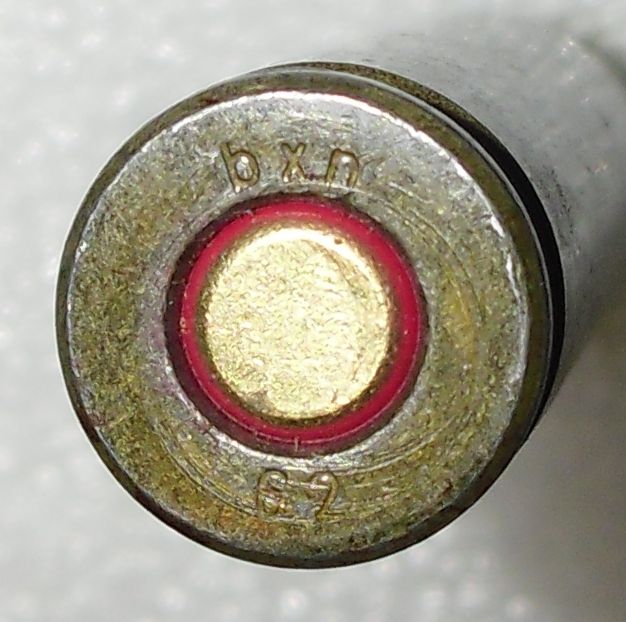 I think that it was a fired case (shooting from AK). It is a pity, I hoped that it is an unusual cartridge. But what for to create such cartridge?

What are the headstamps on the other cartridges…just out of curiosity?

What are the headstamps on the other cartridges…just out of curiosity?

Cartridges are purchased in England

The cartridge isn’t inserted in standard АК magazine. What weapon could use such cartridges? SKS?

it is hard to imagine the neck of that case fitting in a 7.62 chamber…

Unfortunately I can’t see the image. Is it possible that this is a barrel test cartridge with a pointed bullet like 04 loaded?

It seems that the cartridge has a different shoulder position, compared to the other rounds

7,62x45
I seem to recall the latest bxn headstamp is 59.
The last production is ZV 67 seems to indicate an export contract.

From this computer I see the image. bxn never gave its 7,62x39 a colour primer seal, so the red annulus smells. Isn’t that ogive that of the NATO bullet? That could explain the heavy case mouth crimp to hold the thinner projectile. Now if the bullet is not even magnetic, …

edited once for more information

Everyone seems to be forgetting that 2moutrage says that the bullet is 7.92mm. That would rule out any 7.62mm cartridges, except that the parent case may have been in that caliber. His IP asked if anyone had an idea of what his 7.92mm cartridge is. My guess is that it could be something like a 7.92 x 33mm dummy made from another case. Or, simply, something that someone put together in their garage, for some reason.

[quote=“RayMeketa”]Everyone seems to be forgetting that 2moutrage says that the bullet is 7.92mm. That would rule out any 7.62mm cartridges, except that the parent case may have been in that caliber.
Ray[/quote]

It would be easy to assume the final product was a 7.62 x 39 case with a 7.9 m/m bullet seated in it except for the fact that the shoulder location is too low. The German 7.9 m/m short is based on the usual “30-06” head size but the Russian short round is twenty thousandths (at least) smaller in case diameter. Jack

Ray,
I didn’t confirm that the cartridge is loaded by 7,92 bullet. I assumed it proceeding from their availability. But the subsequent measurements have denied my assumption. It is 7.62 bullet. Bullet fastening is executed very hard, but is very qualitative. I don’t want to disassemble a cartridge because I am afraid of it to lose. But without it I can’t identify a bullet. Therefore we are compelled to assume only.

EOD, 2moutrage, Jack - You are all correct, of course. My mistake. My brain is trained and firmly entrenched in inches. It’s hard to break old habits, and brains.;) ;) I need to stick with things I know more about, which isn’t very many.

And any hunter can tried to increase capacity of a cartridge having increased weight of a bullet?

The cartridge isn’t inserted in standard АК magazine. What weapon could use such cartridges? SKS?

Baikal make a single shot rifle in several calibres including 7.62X39. Its not sold here in that calibre but is popular in Eastern block because the rifle is cheap and the ammo is plentiful over there. Google up “Baikal rifle” if you want to have a look at one

It could be somebody’s experimental heavy bullet reload from Eastern Europe (?) although quite why they would want to reload steel cases slightly escapes me. The crimp looks excessive and a bit amaturish.

A standard .308 bullet would still work but accuracy might suffer. However, a 3 thou discrepancy in bullet diameter is not going to be any more than the variations found in rifle barrels, espescially military ones, anyway.