In 1858, the french navy adopted the 12mm pinfire cartridge, is somebody know how to distinguish the military’s cartridges than the commercial’s ones?

Laurent
I was waiting for Aaron to respond to your questions. He has an amazing collection of pinfire and thick rim cartridges and has helped me to identify the 11.6mm X 14.5mm Galand round. The Russian Navy adopted the Galand revolver in March 1871. There are pictures of the round on his web site. Please take the time to visit his website. It is listed on home page under Links to related sites, “The cartridge Freedom Act”. There is an impressive amount of research and effort gone into it. Hopefully Aaron will respond to your questions.
Gerry

The first french cartridges military made are 11 mm centerfire for the Chamelot-Delvigne 1873 Revolver. There were made by GAUPILLAT from 1873 to 1879, by Vincennes from 1879 to 1890 and by “Ecole Centrale de Pyrotechnie de Bourges” after 1890.

Here are pictures of GEVELOT varnished cartridges and their box. I have no evidence that these cartridges are for the French navy but I’m sure it is varnished and that is rare !

Thank you for your answers,
Chassepot, it’s the first time I see this kind of cartridges with a grease groove, it could be for a special order, maybe french navy, why not!?
I had heard about 12mm pinfires cartridges with a G impressed at the top of the bullet, is somebody had already seen some of them and could post pictures?
Laurent

Hi Laurent, Several years ago (2006) I asked about the raised G on 12mm bullet tips, which I have several rounds. At the time, Pete said he thought the G indicated military. If you search “G pin fire” the post is the very last one on page 9 of the results. The photos I poated at the time are gone and appear as the dreaded X, I think I can find them and re-post if no one beats me to it. Maybe later today - Sat 12/1 . regards, lee

12 pinfire with raised G on the bullet.

[quote=“chassepot”]12 pinfire with raised G on the bullet.

Is the cartridge got a grease groove?

Somehow I missed all this pinfire excitement!

Here is the Gevelot cartridges with the raised G on the bullet. No grease grove on these. 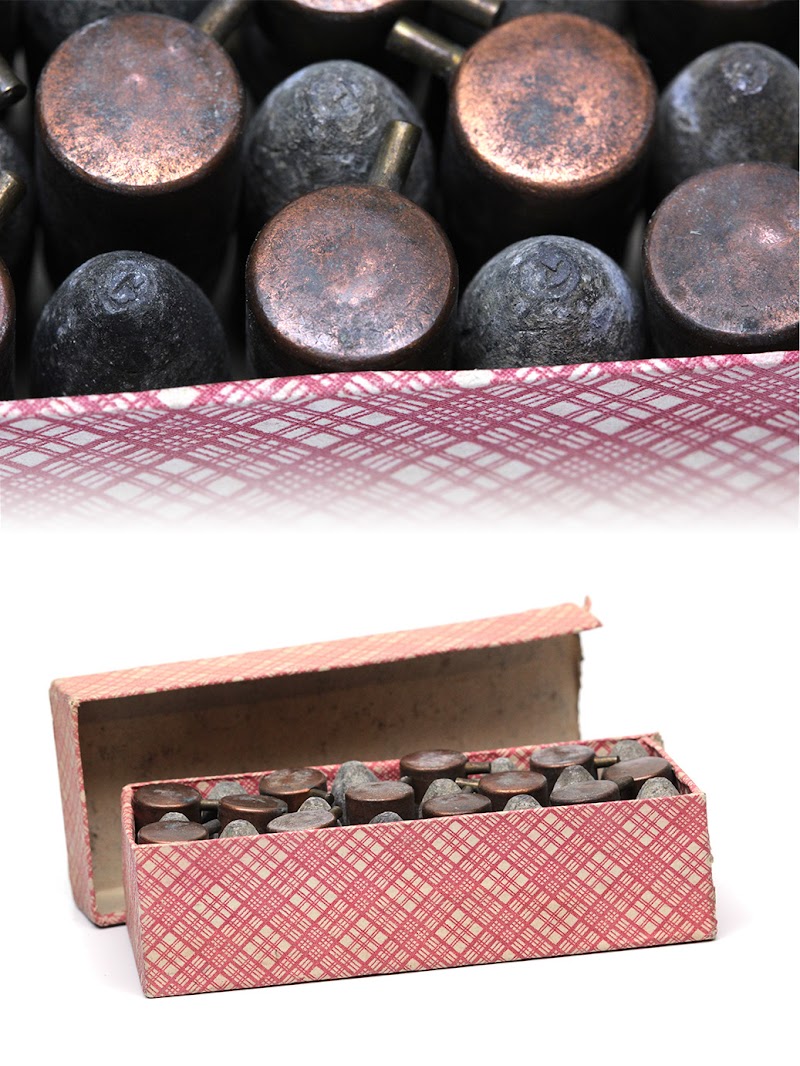 Also, it seems that it was the regular non-government manufacturers that produced the cartridges; in France anyway. This was not always the case in other countries however as some arsenals did manufacturer pinfire cartridges.

Also, for the dates of French adoption of Lefaucheux’s revolver here is a little better timeline:

[ul]
[li]1855 the French Navy began testing Lefaucheux’s model 1854 revolver.[/li]
[li]1857 still testing it and other percussion revolvers as well[/li]
[li]27 Oct 1857 - Officially adopted as the standard sidearm of the French Fleets. This was the first cartridge firearm to be adopted by a major military. [/li]
[li]4 Mar 1858 - The guns began being produced at the St. Etienne Arsenal. The official title of this gun was the “Pistolet-Revolver de Marine Modele 1858” This is actually the same as Lefaucheux’s 1854 model, but that 1858 was the designation given to only the military made ones.[/li]
[li]1862 parts of the gun were changed to be made from steel rather than iron, and other changes enough to warrant a new model name, which became the Model 1858N.[/li]
[li]1868 French Navy begins searching for a suitable centerfire replacement[/li]
[li]3 Feb 1870 - French Navy become first major military to adopt a centerfire revolver - Lefaucheux’s model 1870[/li]
[li]1873 - All model 1858 and 1858N revolvers were converted to DA centerfire which were designated Model 1858NT[/li][/ul]

Other countries that at one point or time adopted a variation of this revolver were Spain, Italy, Russia, Denmark, Egypt, Sweeden, Norway, possibly Romania, and of course the United States of America. Other pinfire variations were adopted in some other countries as well.

Thank you Aaron for these informations, I had a look to your website but it’s more interesting to have your remarks in this conversation!
So with all these informations, it seems than the cartridges with varnished cases or the ones with the “G” impressed on the bullet were produced in the same time than the revolver mle 1858.

[quote=“laurent”]Thank you Aaron for these informations, I had a look to your website but it’s more interesting to have your remarks in this conversation!
So with all these informations, it seems than the cartridges with varnished cases or the ones with the “G” impressed on the bullet were produced in the same time than the revolver mle 1858.[/quote]

Some of the early Gevelot ones could definitely have been used. Also, you could have had Chaudun, and then Chaudun & Derivière (at least by 1860. I do not know exactly when that partnership started. Earliest reference to them I have found is 11 Dec 1860), and others as well.

Also, Tardy Freres was around back then, maybe Victor-Ernest Gaupillat (I am not positive when he was around by himself, but I have some of his cartridges.) They also could have imported cartridges from Belgian or German companies such as Charles Fusnot and others.

Here are other early Gevelot cartridges. These all have that same small raised G on the headstamp.

I think the first two 9mm ones are the same style as the 12mm ones in that awesome box Chassepot posted. 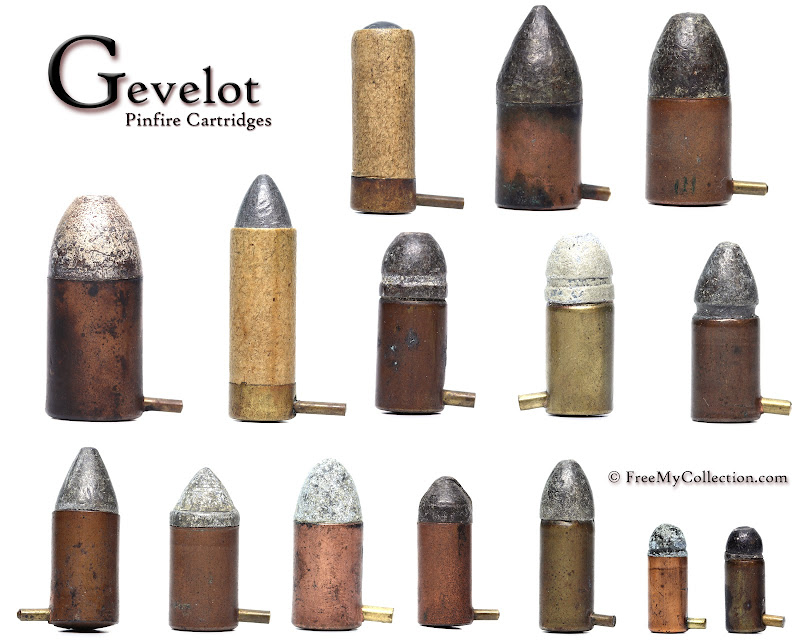 The Gevelot ctges with G on the bullet have never been for the French Marine.

French pin fire ctges for French marine have a vernished case.
I think the cases were made by Gevelot and the ctges loaded in an army manufacture plant

Nothing to see with the fact there is a groove or not on the bullets.
JP

The varnished case part goes along with what chassepot said.

What is the source for this?

Also why do you think they loaded them rather than just bought them loaded?

And the one variation with the G on the bullet is relatively uncommon. Are you saying that is the only variation they made from the time the patent was filed until the patent expired?

The varnished case part goes along with what chassepot said.
What is the source for this?
[color=#0000BF]I asked to a friend who is the most knowledgeable guy about old french ctgs.
He has the documents which proove it.[/color]

Also why do you think they loaded them rather than just bought them loaded?
[color=#0000BF]Same answer.[/color]

And the one variation with the G on the bullet is relatively uncommon. Are you saying that is the only variation they made from the time the patent was filed until the patent expired?
[color=#0000BF]Yes, when it was a compressed bullet.[/color]
[/quote]

do you have a copy of this Gevelot patent?

Also, on an old post about the 12mm cartridge with the impressed G you mentioned it is also on other calibers. Do you have any pictures of these other calibers?

Also, can someone explain what exactly a compressed lead bullet even is?

Aaron
I must have somewhere this patent in my library (digital or paper)
To find it right now is another story because I am very very busy.

You can find it quicker on internet I think
Search google books, you will find french patents.
(Without drawings because these people think you can scan directly a drawing on a folded page without unfold it !!!)

I don’t have any picture because it is not the kind of ctge I keep now in my collection.