Until recently I did not know of these but I have researched them on the web and learned a little.
The 1 on the left is a .38 SP by AMTECH, middle 1 is also a 38, USAC but the one on the far right, the 5.56, is a little strange.

Although its hard to see in the following picture, the primer pocket is threaded! As you can see, its an LC 91 head.

I assume this is something experimental. Enlighten me all knowing ones.

Here are some more. Amtech made these rounds from .25 and up to .50BMG And they claim to make some magazine’s up to 10 pounds lighter.

If they made other calibers, especially auto pistol (.25 was just mentioned), please post pictures of the cartridges themselves - not catalog sheets, as AMTECH went out of business before they really got going big time.

It is not impossible I missed some, like .357 or something, but those are all I have seen or remember. I have one of those three-round displays, and have had .38s in various colors (red, black and white hits my memory, but I am not positive of that).

I have half-a-dozen polymer-cased (with brass base) 5.56mm of different colours, headstamped .223 REM PCA 03 and 04. They were much discussed a few years ago but unsuccessful. Opinions about how well they performed in most guns were mixed, but one thing was agreed: they were incompatible with retarded-blowback guns with fluted chambers (e.g. pre-416 HKs), because the flutes got clogged up with polymer and took an age to clean out.

Here is a picture of the Natec mfr rounds, the 2 Grey coloured rounds are slightly different in colour although this may not show too well in the picture. I don’t know if there were any other colours used.

Steve - if you are talking about your Amtech having a bored-out, threaded primer pocket, turn your display over. The cartridges are held on by a big srew or bolt. Your cartridge is simply a dummy that was altered to put on one of these displays. I just checked my own counter-display, and that is the way mine is assembled.

During the 70’s NOVA Munitions from Denver also did some experimenting with .45 auto and .38 SPL.
The headstamp from the .38 is in the same style as the black .45 auto.
They used a cast lead projectile and blue dot powder to load the cases. 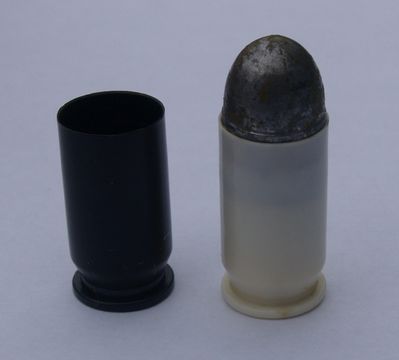 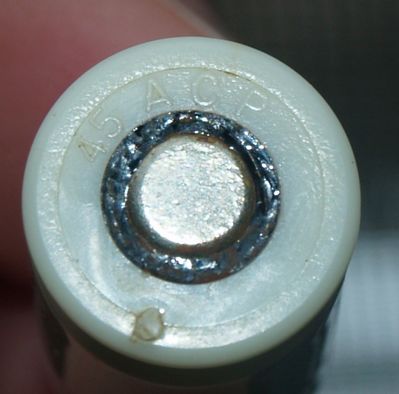 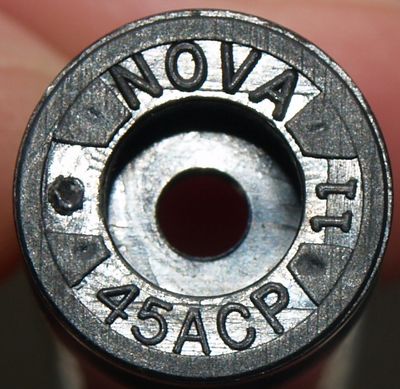 I think most .45 guys are well acquainted with that milky with round with “45 ACP” headstamp, but that NOVA headstamp you show I have never seen in my life. I thought I had U.S.-made .45s pretty well covered. Thanks for sharing that picture with us. One more to look for!

Steve, that round is just one that someone removed from the AMTECH display.

Speaking of which, all the AMTECH displays I have seen are with a clear acrylic base. I have one in blue. Is there any significance to the different colored bases?

IHMSA - your display is one made to give as a gift to someone - probably made for presentation by the company to visitors at the factory, or perhaps even to simply sell. The display shown previously on the thread is a counter-top advertising display for dealers, incluidng a small container for their little shirt-pocket catalogs.

I suspect, although no one can look into their minds, theat for the individual, non-commercial display they just wanted to make it prettier. They probably never thought of this, but dealers are given so much of this stuff for advertising, that sometimes it covers the top of a counter if they use it all. Our counters, except for a work one, were all the glass tops of display cases, and solid-color-bottom displays were the worst, as they may it harder for customers to see the top shelf of a display case, especially if it was an unlighted case. As I say, that probably wasn’t a consideration. Most of the manufacturers when they box their ammunition and make these counter displays, never give even a tiny thought to the problems of the retailer in shelf space, etc. When they started putting plastic trays inside of cartridge boxes, for example, that was a disaster for retailer carrying a lot of ammo, as to shelf space. We had to rebuild our shelves for more space, and then couldn’t display the amount of ammo we wanted to. A box of .25 auto ammunition, formerly not much bigger than a box of .22s, became about the same size as a .45 box was! They also don’t think about how much ight is cut off by counter-top displays that are too large, or not even opaque, much less transparent.

Again, though, I suspect they just thought the blue base was more attractive.

I don’t know if the black .45 has even been loaded. This one is missing the metal insert to strengthen the primer pocket.
The black .38 special with NOVA headstamp is also a known round in the US? I know there is also a version with PALCHER in the headstamp.

(if anybody wants a better copy of the picture please send me a PM with your email adres. ) 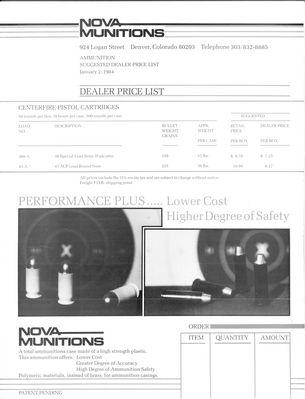 I came across, and shot quite a few polymer cased 38 Special rounds a few days ago. They were grey polymer cased, with an aluminum rim and web area with copper plated projectiles. Headstamped ‘38 special’ over ‘MTS’ and came in generic white boxes with plastic insert to keep them upright.

They shot OK but the rims were a little fat and scraped on the frame. Could not find any info on the MTS headstamp.

A few years ago people were predicting the end of the brass cartridge case but all this polymer cased ammunition has failed to make any impact in the market place.
Why has something that is, on the face of it, a good idea, bombed?

Attempts to introduce an all plastic case, although perfectly viable has always met with customer resistance.

I don’t ordinarily like to cite COTW as a reference for anything cartridge related, but the 8th Edition has an article by Bob Forker that discusses cartridge case materials. If it had been anyone other than Bob I wouldn’t be citing it.

There are also 38 Special with medium gray, all polymer cases hst: “PAC 38 SPL”. They were Spitfire brand by a company called Polytech Ammunition in LA. Now out of business I’m told.

me262 - I hope that you kept some of those “MTS” .38 Special rounds. I just contacted one of the world’s authorities on headstamps and he had no record of it. These commercially-failed Polmer rounds shouldn’t be shot by a collector unless he has hundreds of them. They will disappear completely one day and collectors will have no chance at them. No dog in this fight - I don’t collect .38 revolvers rounds - just a caution. If you didn’t keep any, you shot away rounds you could have traded for 7.62 x 39s.

Lew - unfortunately, despite attempts to save the company, it seems that Plytech Ammunition Company did fold. They were established with a grant from the Federal Department of Agriculture (No, I don’t understand that either), as I recall. It was the first African-American owned ammunition company in America. I think it would have been a good thing for gun owners, and cartridge collectors, if they had suceeded. Their flourishing might have been a good argument against ammunition laws that might put small factories like them out of business. I have a partial box of their .38s, and it looks like really good quality stuff. Not going to shoot any of them at this point to see how that goes, though.

The concept, in rifle calibers anyway, isn’t dead just yet. Still some companies pursuing this. Details when the covers come off…