This invention by Brunswick never made it past experimental stages. Has anyone actually seen one of these projectiles ?

C. Reed Knight of Knight’s Armament Company (KAC) has one in his extensive weapon collection.

I remember one of the ads that used to run in late '80s military journals: “Bowling for Bunkers.” (Brunswick is better known in some circles for their bowling balls.)

Oddly enough, it is described as “being taken into service” by the USMC and being further developed as part of the Army’s Multi Purpose Individual Munition program in Hogg’s Ammuntion: Small arms, Grenades, and Projected Munitions

Apparently not, as I can dig up nothing much on the web.

Hogg was a prolific author, but was not always the most reliable of sources.

That thing is really neat. I wonder how it functions? It looks like the gas is rerouted down and into that contraption. It is pretty big too, I bet it packs quite a bang. I love this type of stuff on the forum.

Sorry to insist on the fact that HOGG (R.I.P.)'s most assertions about weapons and ammo are loaded with errors.

This author was, indeed, very prolific, but also well-known to copy flatly infos from books and articles written by others, including errors!!!

I just looked up and scanned the pages on the RAW from Ian Hogg’s book. Pretty interesting device.

[quote=“philippe regenstreif”]Sorry to insist on the fact that HOGG (R.I.P.)'s most assertions about weapons and ammo are loaded with errors.

This author was, indeed, very prolific, but also well-known to copy flatly infos from books and articles written by others, including errors!!!

I could not have put that better. Hogg did a lot to promote himself and by concurrence the ordnance field. One major problem was that he was a gunnery not an ammunition expert. Dr. Regenstreif’s comments are exactly my experience with HOGG as well.

He copied my work many time without permission. I chastized him. I met him at the AUSA show in DC before he started using my material. After that time be ducked for cover whenever he saw me coming. I enjoyed that and one time cornered him in a display turning off just before I got there to keep the old fellow from having a heart attack. He could exit pretty fast for his age.

I have a number of these projectiles in the collection. The first one was acquired sometime in the early 1980s and had been found at Camp Pendleton, where Brunswick Defense did much of their West coast testing.

I’ve never nailed down the exact time span of this project but it did appear to have much greater staying power than most R&D projects. It certainly lasted from the late 1970s or early 1980s through at least the late 1990s, and most of the marketing seemed to be directed toward the Marine Corps. I think that might be because the Corps seemed to keep an open mind about new developments in rifle launched grenades while the Army focused on 40mm attachments through those years.

Anyway, the RAW went through many changes in both rocket and launch frame over that time. By observation, I think many of the changes were designed to make them more accurate after leaving the M16. By the time the last generation of rockets and launch frames were made (like the one shown below) it had gotten quite elaborate and precisely made. The alignment of the projectile on the bearing mounted rotating shaft was done with small set screws and the attachment point was a junction of small holes and thinned steel tube, nearly to the point of paper thickness.

When the rifle was fired, gasses from the ball bullet were trapped at the muzzle and routed in a conduit into the base of the rocket to ignite it. When the rocket motor fired, the gasses vented through the 4 bent tubes and got the whole thing spinning like a 4th of July pinwheel. You can see the shield built into the late production launcher to help keep debris out of the shooter’s face. You can imagine how much junk would have been kicked up firing from the prone position in the sand at Camp Pendleton.

When it reached a pre-determined RPM, the rocket broke free at the junction point and flew in a straight line to the target. Or at least it did if things were aligned properly and it didn’t take off at a 5 degree angle. I’ve never talked to any of the engineers or testing personnel about these but always heard the rockets performed well and the penetration was great, as can be seen in the photos. I really think much of the refinements over the years had to do with a clean detach from the launcher and hitting the point of aim.

Late in the development the acronym had changed from RAW to RBM, the Rifleman’s Breaching Munition, yet another attempt to infuse new life into the program. Giving an old idea a new snappy acronym seems a pretty common trick in R&D. I’ve always been fascinated by the damn things, partly because of the irony of a bowling ball manufacturer developing a bowling ball shaped (and nearly sized) piece of ordnance. I guess we’re lucky Ford Aerospace stuck with experimental medium caliber cannon ammuntion and didn’t make a flying explosive device that looked like a Ford Taurus station wagon. 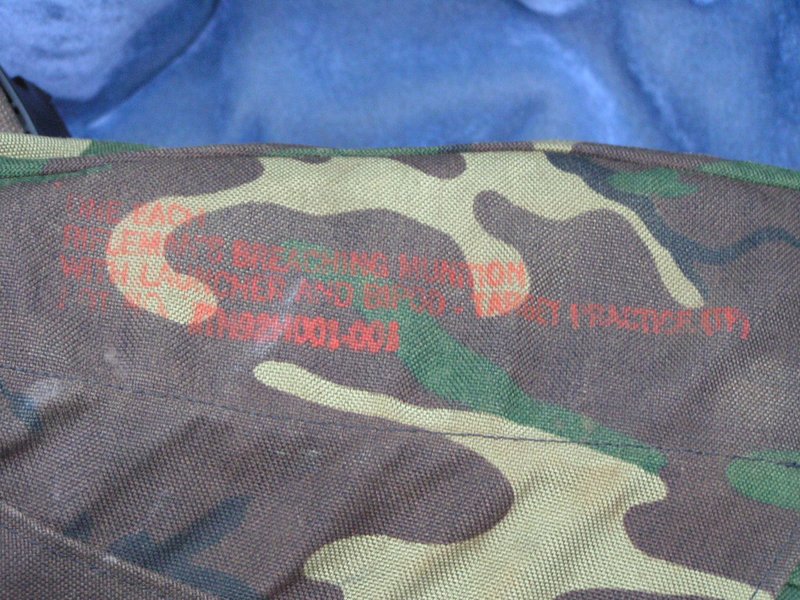 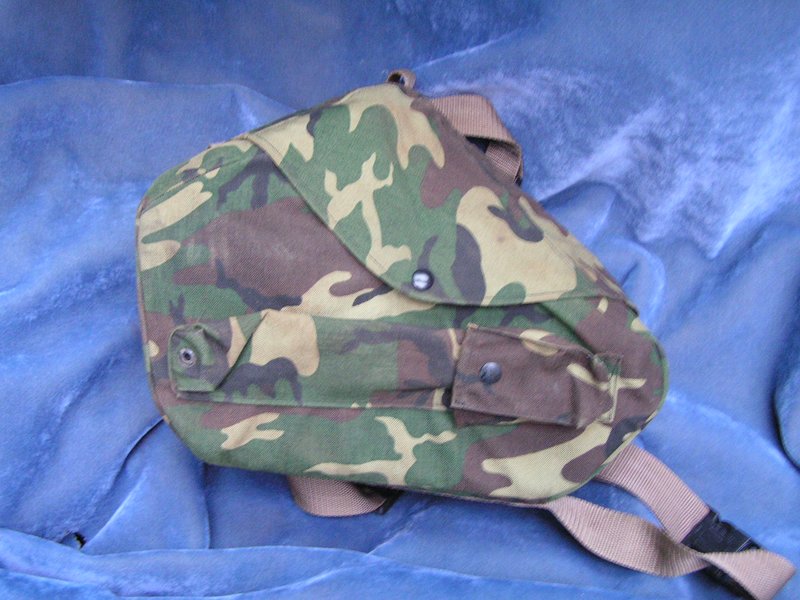 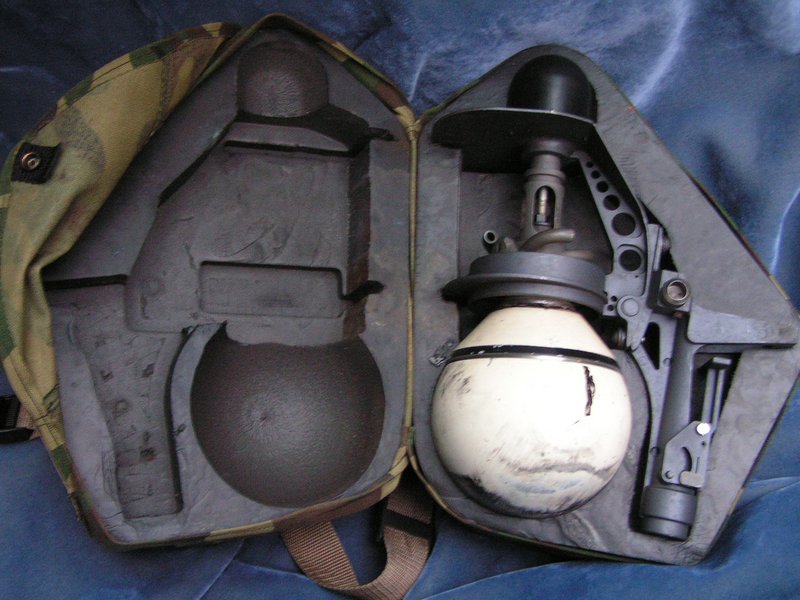 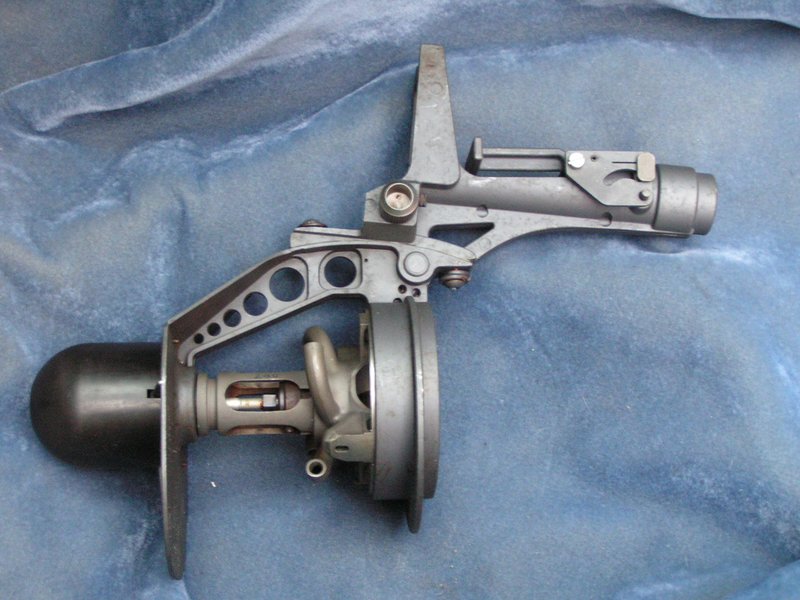 Three different RAW projectiles. The earliest one on the left with the flat rear face and the latest one on the right with the tear-drop shape for additional warhead capacity by shifting the rocket rearward into the tail portion.
Most examples I’ve seen have the black and white color scheme, often broken into quadrants, for range photography purposes. 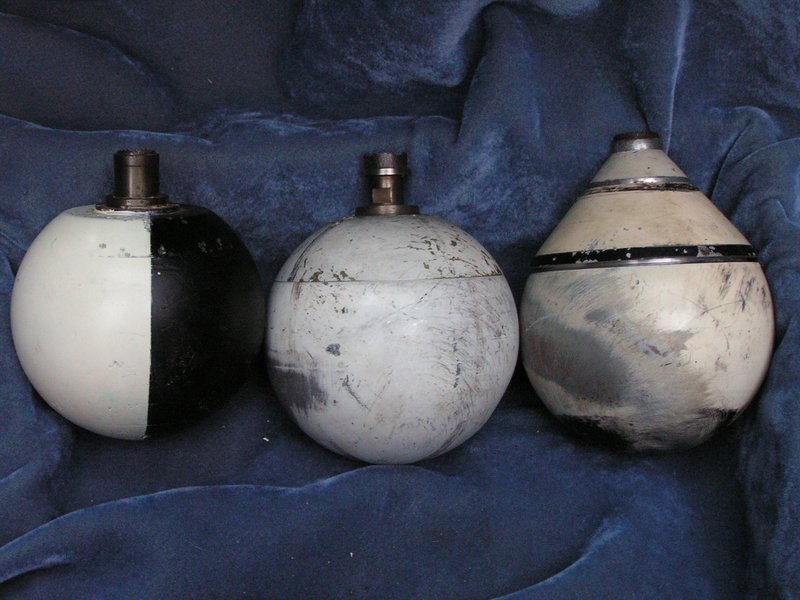 The tear-drop shaped round disassembled with the self contained rocket motor in the cone-shaped tail on the left and the warhead body on the right. The warhead was originally filled with inert ordnance wax and the numerous screws were tapped through the outside shell to add weight for balance. 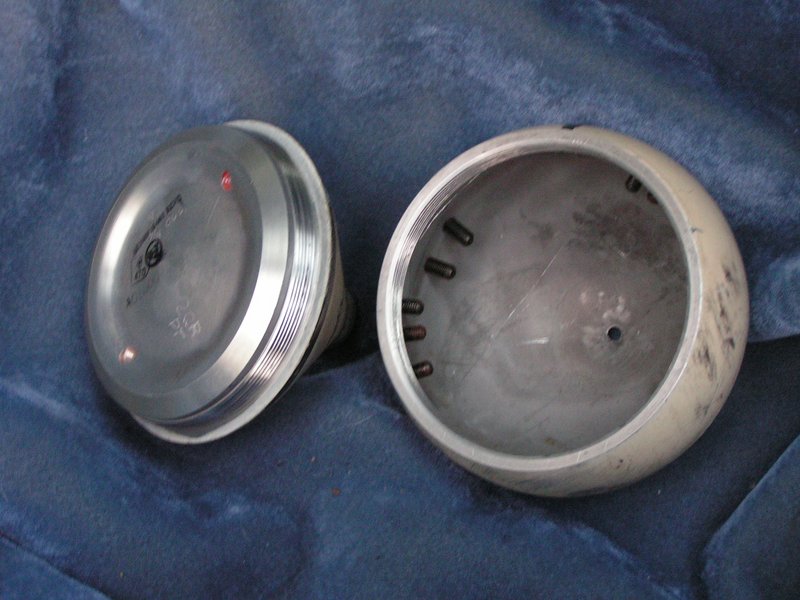 The break away mounting junction point between the rocket venturi and the launch frame. 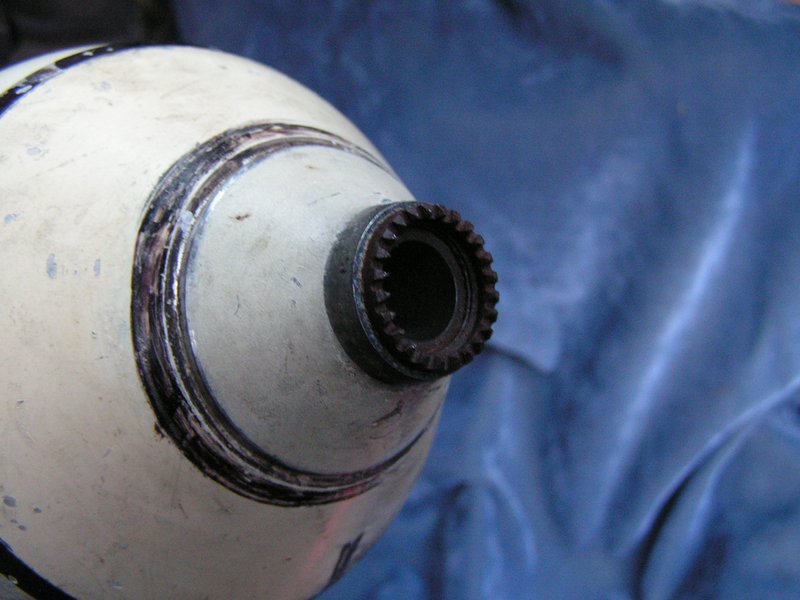