Could you give me a short information for the reason of this repacking.
Was it Battlefield-ammunition which came back or what was the reason of this was done?
In the past, I got a 50 round carton with the lot-nr. -24864XC, repacked 7-44.
The headstamp of the cartridges is EC 43 in different style.
I got this box from Yugoslavia and I was told it was used by guerilla-forces in WW2 in weapons spend by the USA.

Yugoslavia received also after 1945 large amounts of US aid which then was from WWII production.
I assume it will be hard to tell apart what was in country before 1945 and what came later.

The story behind your repacked carton is explained here: viewtopic.php?f=8&t=17815

Missing from the discussion is the “reason for the repacking.”

The “REPACKED” in 1944 refers to taking ammo that was previously packed in the large wooden crates and repacking it in the “Spam cans” and new style crates. Note that the individual cardboard cartons were not opened, just taken from one style shipping container to another. The activity doing the repacking was noted by rubber stamping the individual boxes so that any quality problems could be tracked back, and not blamed on the original manufacturer (or vice versa).

Originally during WW2 the standard packing method for U.S. military small arms ammo was large wooden crates, and the .30 (.30-06) caliber crates were designated Model 1917, and the same crates were sometimes used for other calibers, but I am not sure of the designations for the various size crates used for other calibers. The ammo could be in cardboard cartons, clips and cloth bandoleers or linked, but the wooden crates were the same. These had tin liners soldered shut with a section on the top which could be pulled open for access. Apparently this M1917 style crate was about right for use on pack saddles for transportation. However, they were a bit big and heavy for manhandling and apparently suffered some attrition from damage during handling.

Circa 1944 ammunition packing was changed to smaller self contained metal cans, usually called “Spam cans” which were easy to handle while still sealed. These were packed in wooden crates, usually two or three spam cans to a wooden crate, and since the cans were sealed, there was no need for the tin liners in the wooden crates. 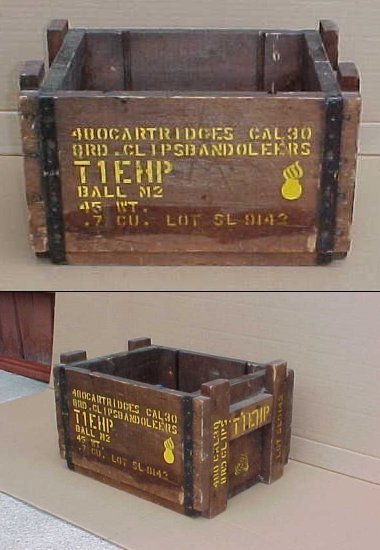 Sometime later, (perhaps early 1950s) the standard packing was changed from “Spam cans” to use the familiar hinged “ammo cans” in “.30 or .50 caliber” size, and these were packed in a “wirebound crate” made of thin wood panels connected by wires so they could be folded around two of the .50 caliber or 4 of the .30 caliber ammo cans. Wooden panels were provided for the ends of the folded crate so the cans were protected during shipping and handling, and the wirebound crate was easily opened and the ammo cans could be carried as needed. 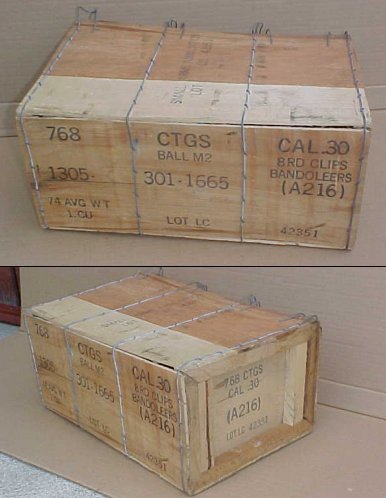 Please excuse the poor quality of the photos, but these show some of the various packing methods, including a metal pack saddle type crate, the M1917 wooden crates, wood crates with Spam cans, wirebound crates and even a metal “20mm can” used for .30 Carbine spam cans. 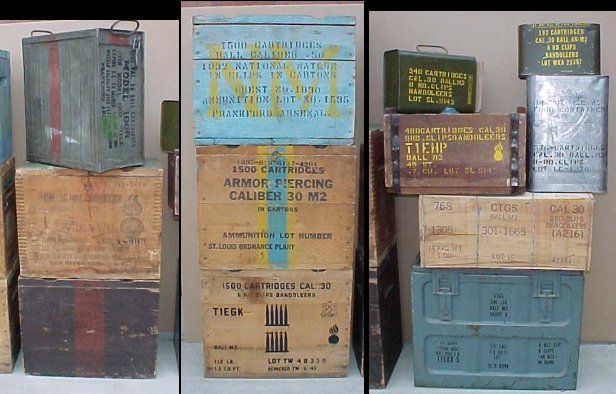 John, “Poor quality of the photos?” No, your pics are great, not poor. That’s a wonderful explanation of the subject. In all these years, I had never really considered this, and your reply makes everything clear. Thanks.

Thank´s for the Information, you provided. Changing the packing from wooden crates to spam-cans seems plausible for me. But there is one question left.
In my carton, the cartridges show headstamps in different style. It´s the same headstamp but different style.
One statement a bit earlier told, that the carton´s have been not opened during the repacking. It was just changing to the spam-can.
Was it in common, to mix the cases from different lot´s or stamping-machines during the filling process in the Ammunitionfactory?

Was it in common, to mix the cases from different lot´s or stamping-machines during the filling process in the Ammunitionfactory?

"Below are the EC & ECs headstamps on my small collection. Other than the HS, all are the same (and all came out of the same partial, repacked, box). As you can see, there is quite a variety in lettering types, even in such a small sample.

I don’t think I’d go so far as to say that mixing headstamps was common - except possibly for the packaging of Cal .45 ammunition. But, when you consider that the Evasville plant produced over 3 Billion cartridges in less than 2 years, it would be more surprising if it was not necessary to do so.

If we are to believe Chrysler (I have no reason not to), the “Spam Can” was developed by them in response to a request from the PTO (Gen MacArthur) for a better method of packaging ammunition for use in the humid conditions in the Pacific. Apparently, the ETO was satisfied with the cardboard cartons and wooden packing boxes.

The “REPACKED” in 1944 refers to taking ammo that was previously packed in the large wooden crates and repacking it in the “Spam cans” and new style crates. Note that the individual cardboard cartons were not opened, just taken from one style shipping container to another. The activity doing the repacking was noted by rubber stamping the individual boxes so that any quality problems could be tracked back, and not blamed on the original manufacturer (or vice versa).

John, great explanation, thanks for posting. I just want to mention that the repacked boxes are new and have a printed label and are not rubber stamped, which means that all the ammunition boxes from a given lot were actually opened and re-arranged in newly made boxes. This may be an explanation for all those different headstamp bunters found in a single box.