Gentlemen,
I want to show you a fired case of 7.92x95 mm cartridge made in Russia. The headstamp has only digits “38” at 12 o’clock 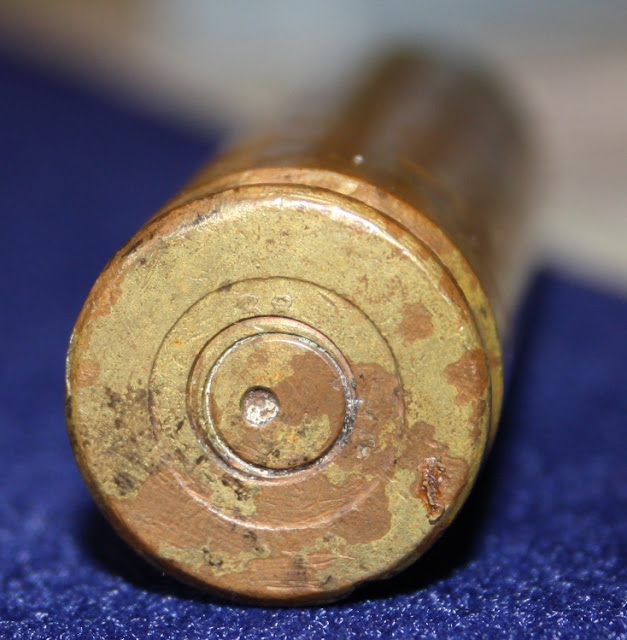 Beautiful! Do you know if it was experimental or actually issued and used?

Copied from the first Pz.B.39 and the seven cartridges that were captured with it in 1941. Reverse engineered, made and issued in small numbers untill they figured that their weapons lasted for only about less than 100 rounds since they could not come up with the required metallurgy. Abandoned soon and focussed on other weapons.

I thought that the Soviet Army had a Degterev-designed anti-tank rifles. Why did they need to copy a German one? Also, if they had large calibre AT rifles (which worked), couldn’t they apply that metallurgical knowledge to copy the German one?

1941 was the year when their AT rifles were just being developed but as the events were going on they desperately needed everything that was suitable to defeat tanks.
The 12.7x108 (NOT rimmed!) AT rifle is along the same line. It got developed merely as an emergency issue.

Metallurgy:
As many people have observed most Russian weapons of that time were somewhat clumsy, all that due to low metallurgical abilities. I guess a Russian copy of the German weapon would have made it as twice as heavy.

Side note:
When the Russian built the first copy of the German A4 (V2) missile (Russian designation: R-1) they had only a percentage of the metal alloys required to build that missile in Russia. That was a major problem of the time back then.

EOD,
I think you are slightly mistaken. The Russian did not try to replicate the German AT rifles. I think that Russian just studied captured weapons. They wanted to know of the risk to their tanks. But there was not enough ammunition. The case was found at the test site. I know that it is difficult to replicate the original bullet in copies of ammunition, but you can use the copies of ammunition for ballistics study, for study the precision of weapons, and other options

OOPS! It turns out that I was wrong. The German AT rifles were produced in the USSR

2moutrage,
interesting article, no doubt, but not helpful to most of us on this forum because of the language. Would you please give a short abstract of its contents?
Thank you a lot
Hans

Hans,
I’m sorry but I do not know English well. Maybe EOD and sksvlad will help you? They know both languages ​​very well

Hooke provided the URL for a pdf file of an article that discusses the 7.92x95 Russian. I ran it through the Bing translator and discovered some interesting things like the actual dated direction to produce the Russian gun and cartridge.

[quote]1932–33 No. 661ss dated September 11, 1941
Adopting a KA anti-tank rounds of 7.92 mm»
State Defence Committee decides:
Adopt a 7.92 mm armor piercing incendiary KA chemical cartridges anti-tank shotguns with slug of metal alloys with the
following key features:
a) muzzle velocity – not less than 1180 m/s;
b) Armor on plate 30 mm thick case at an angle of 20° to a distance of 200 m – not
less than 80% through-holes;
in the battle for patterning) 100 m – not less than 50% hit the circle having a radius of 10 cm.
Stalin
Explanatory material to the decision No. 661ss
Note By The Beg. GAU from September 2, 1941 against vice. President of SCG t. Molotov
«1. According to the decision No. 453ss dated 10.8.41 T-BILLS g. IEC manufactured and tested 7.92 mm GAU KA
anti-tank cartridges with sintered alloy and core of the pyrotechnic composition.
3. accuracy of battlefield good (R50-4.0 4.7 cm);
4. the delays in the work of weapons occurred because Italian stallions on the first down drummer (% Italian stallions
from 6.5 to
10%);
5. Trace the bullets is unsatisfactory, cracks in the illuminated slopes to reach the 80%;
IEC and GAU considered recommending the 7.92 mm anti-tank gross output cartridges
with a bullet with metallokeramičeskim core and pyrotechnic composition made by no. 46 "
Yakovlev, Novikov, Ustinov[/quote]

I will send a copy of the entire translation to anyone who would like a copy. Send me an email.

Great info everyone! Many thanks for your posts.

Perhaps one of our Russian speakers can tell us what that was really suppose to say!

Maybe this is closer

Hooke provided the URL for a pdf file of an article that discusses the 7.92x95 Russian.