Fortunately recent bullet serialization laws never came to fruition. But was this idea around 160 years ago???

I came across this cartridge in my unidentified, no headstamped, container of 12mm pinfire cartridges and noticed that the bullet was a little loose so I pulled it out. I was pretty surprised when I saw that the bottom of the bullet has some raised numbers and letter stamped into it!

It is pretty odd-looking cap inside it too.

Anyone know anything about this? I vaguely recall some other forum or journal discussion talking about markings on bullets of other types of cartridges. 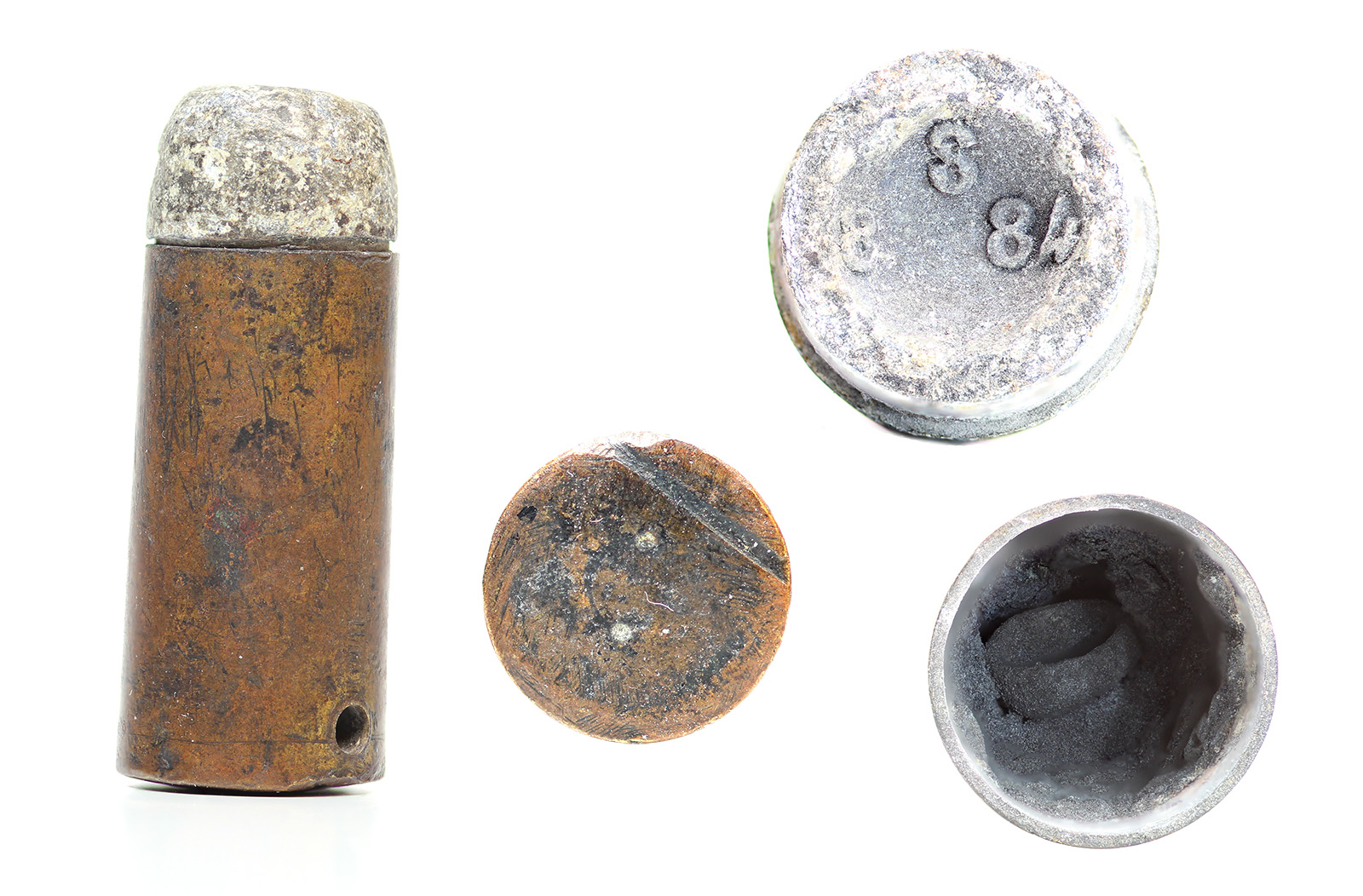 The Dutch made a lot number in the bullet.

I never seen that !

Just a first impression, this bullet stamp seems to a 10.6 Reichsrevolver headstamp : raised, same positions for month and year, S for Spandau…

Some European countries stamped the bottom of 9x19mm bullets (and I believe, some other pistol calibers) well into the 1930s. During WWI most German 9mm manufacturers stamped their symbol on the bottom of the bullet-DWM typically stamped their number for the bullet. the Kynoch ammunition made for the Vickers Lugers had a bullet base stamp of K and the last two digits of the year as I recall.

My guess is that S is the manufacturer and 8 84 may be Aug 1884. This would probably not be German since in WWI the base stamps were mostly (as I recall) done in old German script. Others can help me out here.

These base markings are very interesting. There is a 9mm cartridge headstamped “K 4 36”, and other dates from 1935-1939, that was generally considered to be a Kynoch product, probably for Lithuania since a similar headstamp occured on a 7.9 (I believe) made by Kynoch for Lithuania. Many years ago, I finally had a duplicate and when I pulled the truncated bullet to see if it had a Kynoch basemark, I was amazed to see the typical basemark “DM” found on DWM truncated 9mm bullets from WWI. I still believe these rounds were made for or by Lituania, but the “K” could stand for either Kaunas, a Lithuanian factory, or Karlsruhe. The headstamp in the Kynoch drawing could also have stood for Kaunas, who could have been loading components bought abroad!

Always seems every step of info leads to more questions. That is why this hobby is so much fun.