What would the headstamp be on cartridges for this empty SFM cal .45 Colt & Thomson box?
Bob R.
Second scan is better.

The headstamp will be military style. Mine is brass case, GM RN FMJ bullet, brass primer with red primer seal, headstamp: 1 SF 57 I. The final entry is the letter “I”, not a Roman number one.

Bob - with apologies, I must say that my answer is probably not correct. For some reason the year “50” in the lot number escaped me, as did the large difference in the box label of your box from mine. The box I have was very, very common in the US with thousands of rounds of the ammo sold. I will email you a scan of the box label in case you want to post it to this thread.

Actually, I have not seen your box label before. It is a great box. I note that they use the inch measurement, whereas mine, and a wood case for 1200 rounds that I have, uses the 11.43 mm metric measurement. Further, my box only mentions “pour pistolets” while on your box they spelled “Thompson” wrong (spelling it “Thomson,” with the “p.”

My box is also 25 round and with a green label of similar format to yours, but different content and arrangement of that content.

I should note in the 57 date that I also have a cartridge headstamped from the second quarter of 1957, “2 SF 57 I” with the round have a CN bullet with red mouth seal. All other characteristics are the same as the one from the First quarter of 1957. The only other round I have noted (I don’t have it, but then I don’t collect dates much in .45 is “4 SF 56 I.” I have never seen any other military-style headstamps on SFM .45 ammunition. There are three other types in my own collection - NO headstamp; * S.F.M * GG; and * S.F.M * CAL.45" so it could be one of those, in which case due to cartridge characteristics I would think it would be the last one. I have no such confirmed knowledge, however.

By the way, there is also the well known “Ethiopian” contract, which is more likely to be for Turkey, and as some old form of middle-east script on the headstamp, as well as the * GEVELOT * CAL.45 headstamp.

Sorry for the initial confusion.

The same box and one original cartridge.

Chassepot - Thank you. Very nice info. I have that cartridge in my collection, but the box is great. Maybe some day I will get lucky and find one. It probably is very rare in the US though, as I do not believe any of these earlier rounds were part of the huge importation of French .45 that my box came out of. I even have the 1200 round wood case for my box.

This is a new one to me, and I love the fact that it has the “Thomson” marking. The French were the largest, early adopters of the Thompson (Colt era), even though they adopted it after the U.S. military did. I have some of the 1956-57 era French ammo that is mentioned here, but I’ve not seen this 1950 type before. 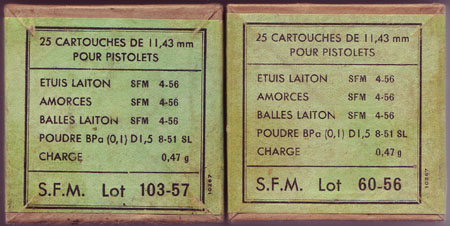