*Sneak Peak* of the new CartridgeCollectors.org!

I have been hard at work for awhile redesigning CartridgeCollectors.org I hope to have it live within the next month. I have all of the mechanics worked out and now only have left the daunting task of converting all of the many articles and research and information on the current site over to the new site.

It has been a fun journey thus far and I hope to add many new features in the future, which will be discussed later.

I took a few screen shots of some of the pages if you would like a sneak peak of what’s to come. I will plan to have a more thorough walk through of where all of the new content is located before the site launches, though I feel it should be very easy now to navigate and find content.

Click the images to view the full size preview of each page. 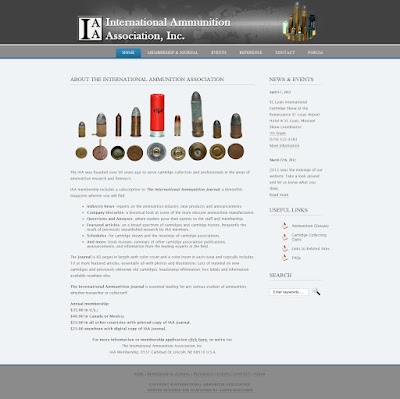 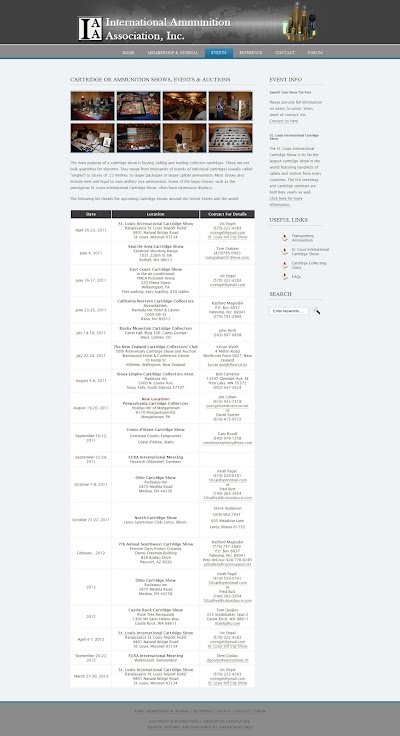 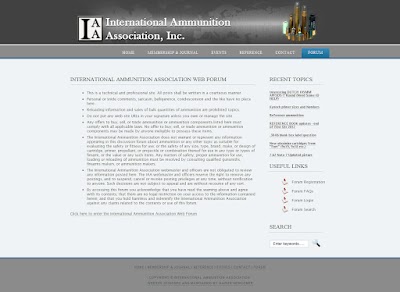 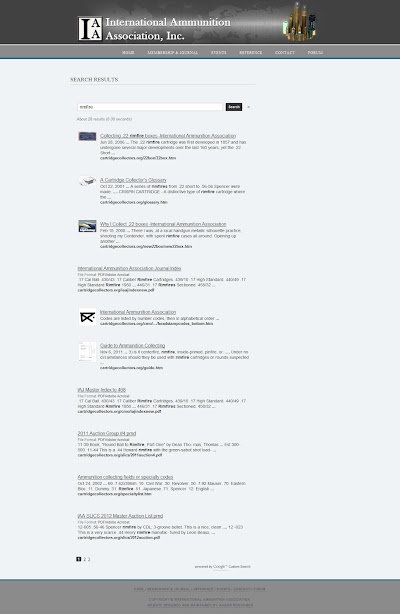 [color=#FF0000]iPhone/Android/mobile view of site. I spent quite a bit of time making the mobile version function great with a lot of detail into both making it look good as well as staying functional.[/color]

Looks like the new look will help push the IAA into 2012 and beyond! Cant wait to have a good explore when it is launched.

That really looks great, Aaron! Thanks for the countless hours of work it must have taken for you to do this so well. Now, I guess I’ll have to join the 21st century and get an iphone just to keep up.

Looks great, Aaron.
My only thought is that if we’re trying to modernize and show a broad spectrum, the cartridges at the top should include something FMJ, color tip, military, caseless, experimental, etc. Lots of old & lead there.

Thanks Aaron! Well done and much appreciated.

[quote=“jonnyc”]Looks great, Aaron.
My only thought is that if we’re trying to modernize and show a broad spectrum, the cartridges at the top should include something FMJ, color tip, military, caseless, experimental, etc. Lots of old & lead there.[/quote]

Great work Aaron!
I agree with Jon, the spectrum of the IAA is wider than the shown cartridges. Basically a “representative” of all kinds of ammunition could be considered to be shown there including medium and large caliber or even a grenade etc…

It is harder to see in the above condensed images, but there is actually a cartridge group that will always show in the banner, regardless of what page of the new site you are on. I think the cartridge lineup shown on one of those pages is just the lineup shown on the homepage in that example. That could possibly have rotating cartridges in the future, like a new way to show “cartridges of the month” in preview format or something like that.

The cartridge group that is in the banner are the ones shown below, and they are a good mix of old, new, commercial, military, FMJ, rimfire, centerfire, and bizzarre, etc…:
(Let the guessing game on exactly what those cartridges are commence) :-)

Thanks for the work you do to give us this forum. Really appreciate it.

[b][color=#408000]Having a broader spectrum of cartridges shown is one thing that has been mentioned before as well. I actually am bringing my tabletop photo studio to SLICS and am going to get some pictures of other types of cartridges; modern, military, wildcats, artillery (if it will fit!) I also liked the idea of having those scroll through on the home page where that image is now. I just don’t have any of those in my personal collection so the site does not yet reflect that.

I actually already wrote the coding for this as well. When one loads the site it will randomly show one of the images that I plan on taking, and then place the other 4 or 5 or so in a random order and scroll through them every 3 seconds or so.

Actually, If someone here has access to some very large shells and a way to take a high-resolution picture of them with a completely white background I would be grateful for a picture. I can also have individual images and stitch them together. I would prefer to have them taken at the same scale though.

The smaller stuff I can (and will) take at SLICS.

Additionally I would like to have those images featured as the Cover photo on the IAA’s Facebook page occasionally too.

Also, the image on the banner, as Matt pointed out, has a nice range too. I also want to thank him for taking those pictures and his wife (a graphic designer) for designing the banner. I think it looks much better than what I had originally come up with, and stays true to the site’s very modern sleek feel I was going for.[/color][/b]

I am thrilled that Aaron has taken on the task of improving the IAA site. He has tremendous skills, and the new site will be a much better web presence than our old site.

And, he knows how to make it work on the new-fangled hand held gizmos that all the young folks have!

What Aaron is doing is the greatest…I can’t wait to get to SLICS to hear and see more of his work and to “play cartridges”…the traffic potential on a new website is unlimited and the new design will hopefully invigorate our members to update and contribute to the many resources on the site (or yet to be on the site)…the Headstamp list…I would love to see the headstamp list be “Wiki like” whereas many folks could contribute to that yeoman’s task…that has become so daunting…no one wants to take it on!

Aaron…you won’t be “reaching” at the bar…your work is appreciated beyond words !!!

(and to our “Founding Internet Father” Mr. John Spangler for bringing us along!!

I can see a light…and it isn’t on oncoming train !!! the BEST

Looking GooooD !!!
Just keep it easy to use for those of us without lots of tech-skills / knowledge.
Thanks for all the hard work, even if it looks like it was a labor of love!

LOOKS GREAT! I wish I had your talent!

That looks really good! I like it! Thanks for all the hard work.