A friend bought this can and one 20-rd box of ammunition at a militaria show last weekend. I thought it was very interesting and had not seen one before.

I guess the basic questions are…who was it loaded for? And why? It sure appears to be a standard GI can and 20-rd carton, although the carton cardboard seems a bit pale. I didn’t get a photo of the cartridges but they looked like basic .303 ball rounds, with U.S. type annealing marks. The seller said they were boxer primed cases. I think the headstamp was “.303 WCC 81 005”. Not 100% sure the “005” was included but I think so.

So why was the U.S. Government contracting for .303 ammo in 1981? I’ve heard stories that one of the reasons .303 is scarce on the world surplus market today is that the CIA scoured the world in the 90s and perhaps after 2000 to supply friendly forces that were still using older .303 weapons. But this is 1981 production.

If anyone knows for sure or has a good theory, I’d sure like to know. Thanks in advance. 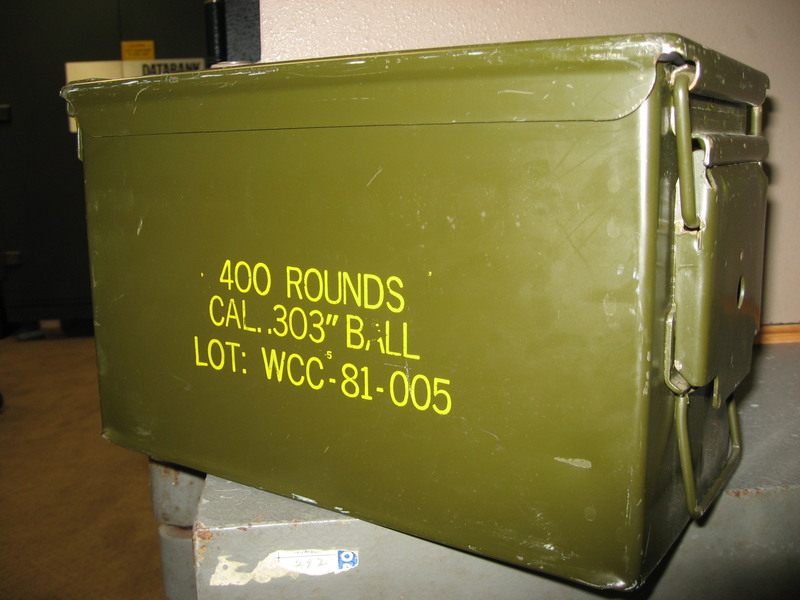 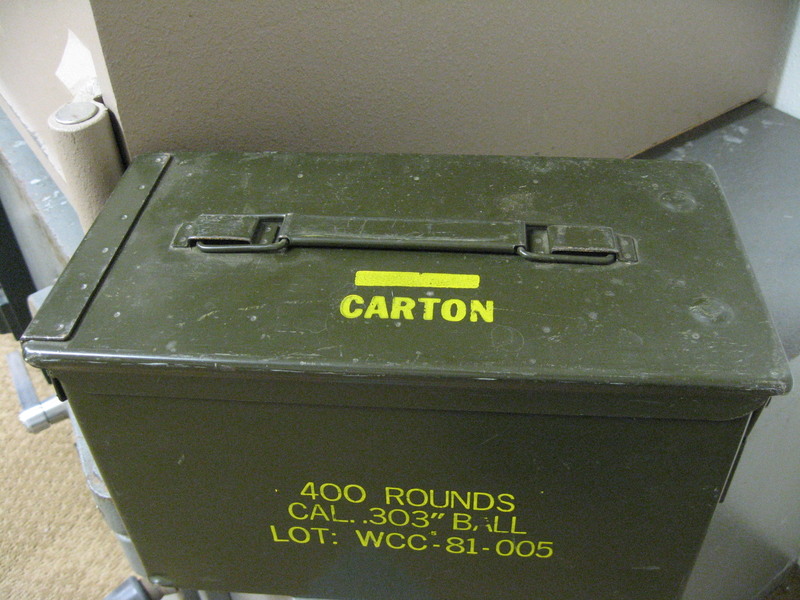 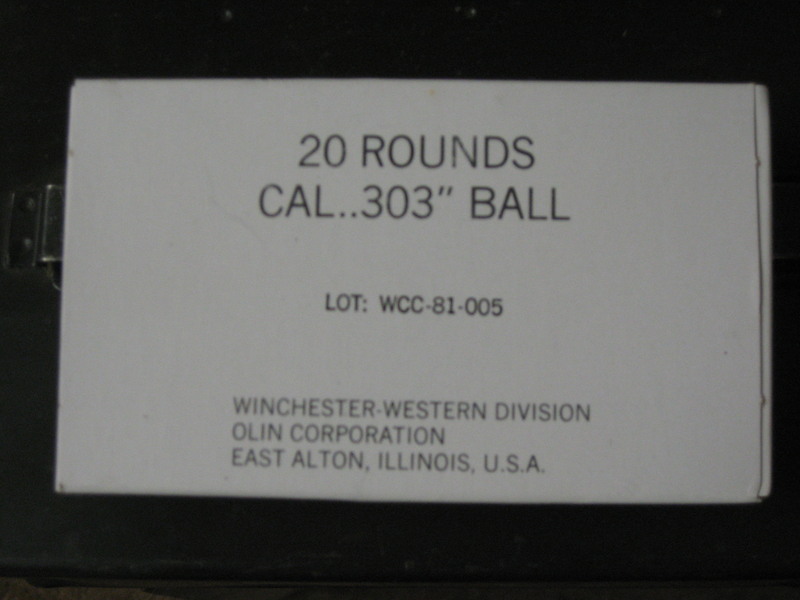 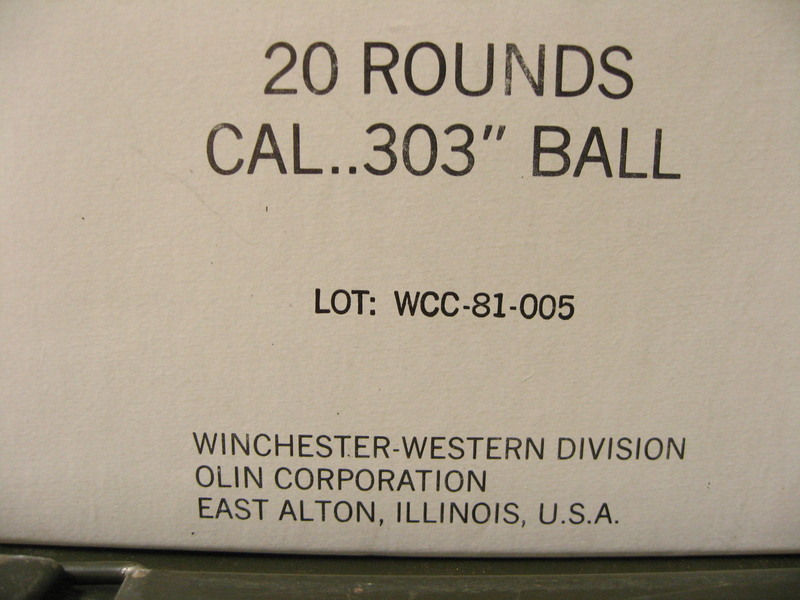 The typical history is that this stuff was destined for the Irish Army, or otherwise for Canadian Rangers, or the Indonesian Army… but the story goes that this production came immediately on the heels of the Charlie Wilson funding initiative to arm the Mujahadeen in Afghanistan who were fighting the Soviets. They had a lot of .303 weapons at the time, and the markings may have been scrubbed in places like West Germany via CIA efforts before being forwarded on to the front.

I think the first answer, made for Ireland, was probably correct for the batch of this ammo that came back to the United States as MILSURP.

It came hot on the heels of a shipment of “new in the original boxes” Rifle No. 4 Mark II (I think - I have one, but buried deep in my safe downstairs). We bought about 100 of the rifles, and then a quantity of ammunition that had come from the same source, Ireland, which was the Winchester Stuff, perhaps the best surplus .303 that ever came in the US. I bought a can of it too, but don’t recall if I still have the can. The rifles were truly new, and there were samples of all four buttstock lengths among them, Bantum, Short, Normal and Long. In one group, we had seven or eight with consecutive numbers. I almost bought a consecutive pair, but decided that was silly. I know a customer of ours that still has his sealed in the plastic cover in the seal box. I think I kept the label off my box, but I opened it and have shot the rifle a few times, although I prefer my Lithgow No. III Mark I* just for charisma, despite the better sights of the No. 4. I am almost sure that my can of ammo also was from 1981. Too much work to get it out to check it. It is buried in a pile of heavy ammo cans. In fact, my son reorganized it for me at my request. Too daunting a job for an old fat man.

What are the headstamps on these cartridges?

Also the very civilan caliber designation is somewhat unusual for a military environment and in particular for (sorry you Irish) when in the British sphere one would expect respective designations maybe.
Any thoughts?

John, The Irish sound like a better bet than the CIA. Wilson did get money put into the 1981 black budget but this would have been contracted by the agency, and based on other things they have done, they would have had the boxes and cans unmarked or with no makers ID. I suspect the ammo also has a WCC headstamp which would be consistent with the box label.

Here is a picture of the headstamp: 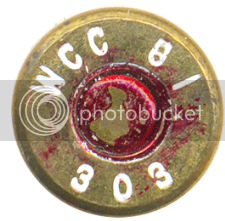 EOD - the caliber designation on the box is not, by American standards anyway, very “civilian.” It is much more military. We do not generally use the term “ball” on commercial box labels, using instead the bullet weight and type. Nor do we call the caliber .303" with the mark for “inch” as simply point .303 is understood to be in inches and fragments thereof, since we are not officially on the metric system. The terminology of “.303 Inch” is much more UK military than American commercial. It is not really even American military terminology because of the inch mark used after the caliber.

That is my view, anyway. There are probably exceptions, but I am speaking of the general terminology used on commercial American ammunition.

John, so what we see here is a mix of US and British terminology and systems then.

EOD - that is certainly a fair description, and not really uncommon on ammunition packaging made by one country for another. I have a German box for blanks, as I recall, where they use the terminology “.38 Luger.” I am sure it was for export, and the biggest market would likely have been the U.S., but to my knowledge, the 9 mm Luger (9 x 19 NATO, 9 mm Parabellum, 9 mm 08, etc.) has never been called the .38 Luger in the U.S., or not by anyone that knew anything, anyway. Just an example. I am sure we could all come up with dozens more.

Great responses. Thanks to all.

EOD - that is certainly a fair description, and not really uncommon on ammunition packaging made by one country for another. I have a German box for blanks, as I recall, where they use the terminology “.38 Luger.” I am sure it was for export, and the biggest market would likely have been the U.S., but to my knowledge, the 9 mm Luger (9 x 19 NATO, 9 mm Parabellum, 9 mm 08, etc.) has never been called the .38 Luger in the U.S., or not by anyone that knew anything, anyway. Just an example. I am sure we could all come up with dozens more.