Wow, I wonder if they will rebuild and start again, or if they will take the insurance money and call it quits in this recently slower gun / ammo market? They always did lots of cowboy ammo and covered many of the old calibers such as 38-40, .38 Long Colt, .44 Russian, .45 Schofield, and 45-90.

Here are photos of what it was before and during:

Good question, I wouldn’t think there would be anything salvageable from this. I think a vacuum is about to be created in the cowboy action market. Things are going to be scarce…

There does seem to be plenty of alternatives for cowboy ammo in most of the key calibers that I checked though. HSM, Black Hills, Ventura and Precision Cartridge cover all the oddballs that Ultramax did, while in the more common calibers you get Hornady and Magtech among others doing cowboy loads. The one that might suffer looks to be 45-90. As far as I can tell, Ultramax did 90% of the 45-90 on the market, with only PCI and Ventura Heritage doing a little bit. I think the Ventura stuff is from Load-X. 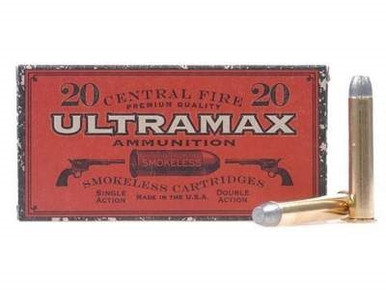 I was just noticing that another caliber which Ultramax seemed to have the market nearly cornered on was .41 Long Colt. They are pricey at $65 to $75 per box of 50 and who knows how long it will take for that ammo to dry up from the retailers who have some. I only have a couple boxes on the shelf myself. Ammoseek shows 7 retailers online with some in-stock for now, but half of them show only 1 in-stock, which probably represents the same distributor source whomever that is. The only other one is Ventura Heritage with some of their own line - but that is likely small quantities as well. MidwayUSA has some… if you like paying $75.99 per box - ouch. Best bet looks like Bud’s with 10+ in stock:

On their website
“Our company has experienced a fire. We plan on rising out of the ashes. We will have phone service restored by the Monday the 14th”

Has anyone called them to see how it’s going?

Here is an update from a couple days ago, reporting that it was an accident which seemed to have started when work was being done on the heating system.

ATF: Ultramax fire was an accident

The ATF ends its investigation into the Ultramax ammunition factory fire, saying it was caused by work on a heating and cooling system.